Home News Playing with history: how heritage and archaeology are transforming video games 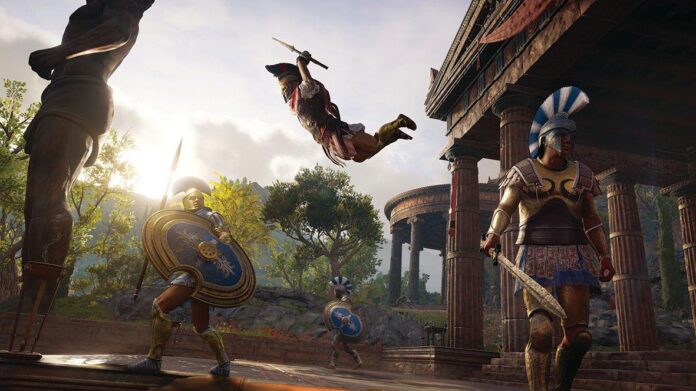 Ever since Carmen Sandiego swiped her first priceless cultural artefact in 1985—wherever in the world she happened to be—heritage has played a tempting role in video games. That early educational computer game, Where in the World Is Carmen Sandiego?, was a surprise hit, spurring a whole franchise of follow-ups as well as a popular children’s television show (and an a cappella hit song).

How cultural heritage is portrayed in games has come a long way since then, however. The deluxe version of Carmen Sandiego included pixelated photographs from National Geographic. The recreation of ancient Greece built for Assassin’s Creed Odyssey, meanwhile, is so immersive that a non-combat Discovery Tour version was released in 2019, allowing players to stroll atop an active and very much unruined Acropolis. And you don’t even need to assassinate a single person.

Now, rare objects from one of China’s most remote heritage sites will appear in the mobile multiplayer game Clash of Kings, letting you take in the marvels of Dunhuang, a Silk Road city on the edge of the Gobi Desert, known for its brilliantly painted Buddhist cave temple murals, while waiting for your dinner delivery to arrive. In the game, players build up an empire and wage war against opposing kingdoms. A new episode, Dunhuang Civilisation, will include a map of the ancient city that players will be able to explore, as well as famous elements from the murals, such as the flying mythical figures known as apsara.

“Players will experience something special and very authentic and close to what is seen on the cave walls,” says Han Jing, a co-founder and managing director of Artistory, the cultural IP company that brokered the licensing deal between Clash of Kings and the Dunhuang Inspiration initiative, run by the local culture and tourism board.

Gamers in the caves

Since Clash of Kings is played by a reported 300 million people worldwide, the project could also raise more awareness of the Unesco World Heritage Site, which is well known in China, but may be unfamiliar to a Western public. “It’s fantastic to be able to bring Dunhuang to people outside of China to learn about the site,” says Natasha Dyson, co-founder and licensing director of Artistory. “And I hope that the stories, the images and the designs from the cave art will inspire Clash of Kings to expand their audience.”

According to Han, “Allowing gamers to experience real living history and culture can achieve this like nothing else can, and we are seeing other museums and cultural institutions seeking opportunities in the gaming world.”

Dyson adds that games are part of Artistory’s digital licensing plans for museums, along with digital collectibles, NFTs and augmented reality experiences. She acknowledges, though, that developing a new video game takes a long time. “There’s a lot of research, a lot of work, a lot of design from both sides before we launch.”

This level of commitment might be what makes cultural authenticity so appealing in video games. Ubisoft, the maker of the Assassin’s Creed series, for example, employs a full-time historian, Maxime Durand, who works with a team of archaeologists, researchers and consulting specialists to add historical depth to their games.

“Interestingly enough, because the players start to feel part of this virtual world, they often want to learn more about this world, and video game designers play into this need: they scatter around virtual books that players can collect, which give brief overviews of real-life events or historical battles… They write in shortcut scenes to visualise the historical context of an event, and some games even have elaborate Wikipedia pages about the game world and its historicity,” writes the scholar Tine Rassalle in an article about “archaeogaming”, a popular term for the crossover between archaeology and video games, in a recent issue of the journal Near Eastern Archaeology. “In other words, they completely immerse the player in historical information, but are doing this in a nonlinear form, in which the player gets to pick and choose what she wants to spend time on.”

While there is an obvious allure for players in discovering history through cultural heritage, what do museums, heritage sites or historians get out of working with companies that make these forms of entertainment? “We can use these games as entry points to talk with students and the general public about archaeology and the problems with looting and the black market,” Rassalle suggests, or work with companies to dispel the myths around what archaeologists do, and how heritage should be treated in the real world. The truth is that a whip and a fedora are not really of much use in the field.

Some researchers are even using gaming technology to help in their studies of the ancient world. David Hixson, an anthropologist at Hood College in Maryland, for example, turned to Epic Games’ Unreal Engine software framework to build a three-dimensional reconstruction of the ancient Maya city of Chunchucmil. For Hixson, one of the main benefits of working with the Unreal platform was its online connectivity, “meaning that two (or even 32) people, miles apart, could load the map of Chunchucmil at the same time and meet each other there to take a walking tour together”, he wrote in a paper on the project. “This makes it an ideal platform for interactive learning.”

Art Industry News: A Sweeping Documentary Series About the NFT Phenomenon Is Coming to Amazon Prime + Other Stories