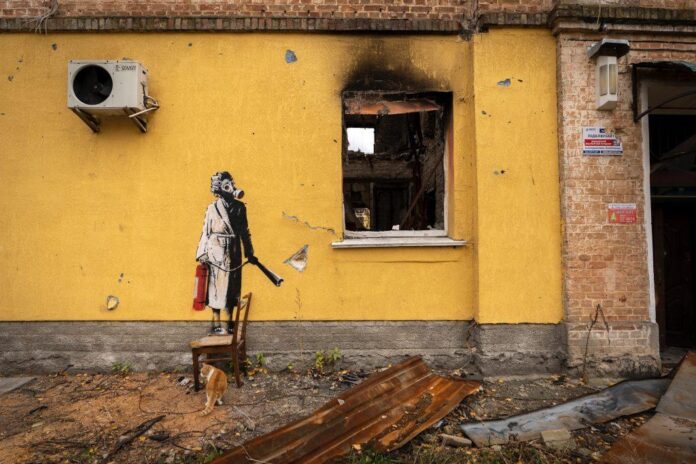 The Ukrainian police have managed to rescue an artwork by Banksy in the town of Hostomel, just outside Kyiv, after it was almost stolen by a group of eight people.

On December 2, the thieves cut the work from the wall of a destroyed and disused building that had been badly bombed when the city was captured by the Russians. The image shows a woman wearing a dressing gown with her hair in curlers. These signs of comfortable domesticity are jarringly juxtaposed with two accessories of war, a gas mask and a fire extinguisher.

Luckily, police were quick to arrive at the scene of the crime. “Several people were detained on the spot,” reported Kyiv’s governor Oleksiy Kuleba on a post on Telegram. “The graffiti is undamaged and is with the law enforcement officers while the investigation continues.” 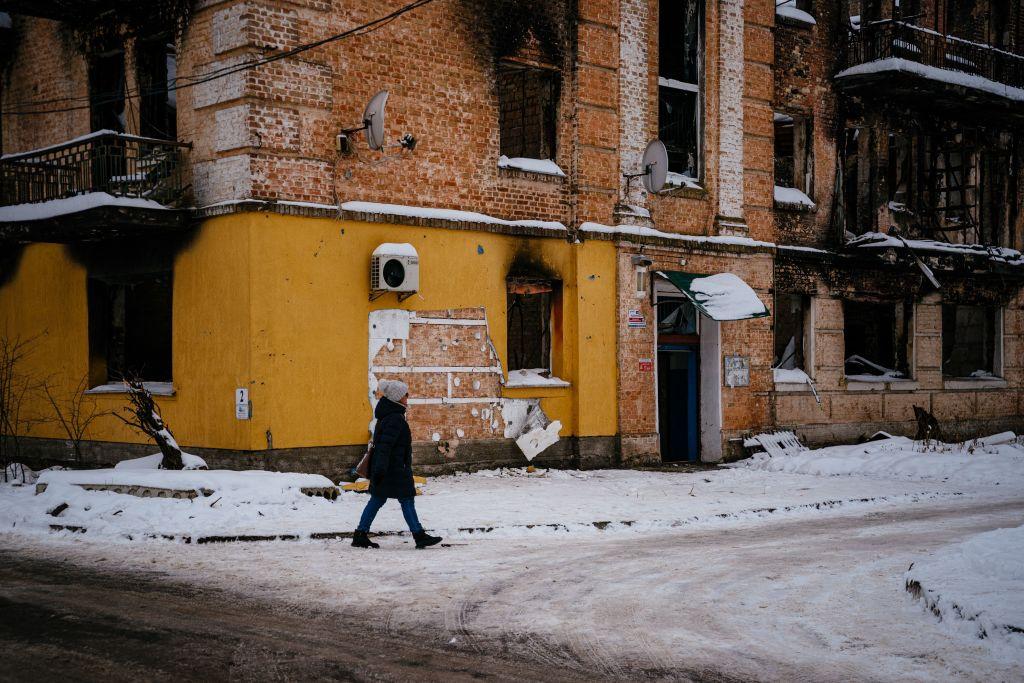 A woman walks near a cut off of the wall of a damaged building from where a group people tried to steal a work of the famous British artist Banksy in the town of Hostomel, near Kyiv, on December 3, 2022. Photo by DIMITAR DILKOFF/AFP via Getty Images.

Kyiv’s police chief, Andriy Nebytov, said that as many as eight people aged between 27 and 60 were suspected of having been involved in the attempted heist.

The mural was one of seven stencilled pieces that Banksy completed in several war-torn in Ukrainian cities in November. They are all now under police protection, according to Kuleba’s statement.

“These images are a symbol of our struggle against the enemy,” Kuleba added. “These are stories about the support and solidarity of the entire civilized world with Ukraine. Let’s do everything to preserve the works of street art as a symbol of our future victory.”

This is not the first time thieves have shown an interest in making off with one of Banksy’s public works. Earlier this year, another group of eight were found guilty of stealing a mural by Banksy that had been painted on the entrance to the Bataclan in Paris, in tribute to the victims of terrorist attacks in 2015.

After being stolen in January 2019, it was recovered in an attic on a farm in Italy in June 2020.