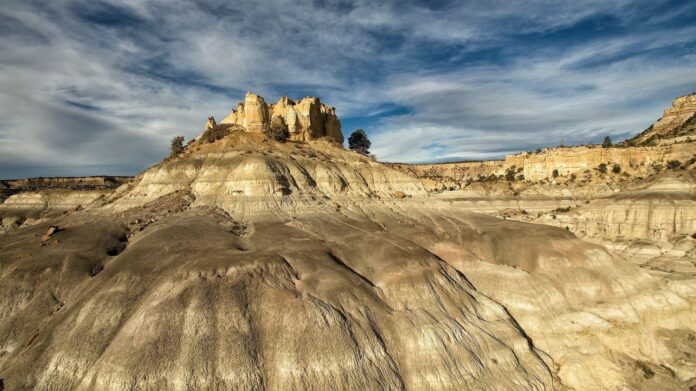 Every year, millions of visitors descend upon national parks in the United States to experience the vastness, natural wonders and dark skies of these great outdoor spaces. But looming near many of these landscapes, which are rich in fossil fuels, are oil rigs and gas wells that are increasingly encroaching on their borders.

A new report by preservationists highlights the need for vast reform to federal oil and gas leasing programs, arguing that several parks and monuments risk becoming “islands in a sea of development” that threatens not only scenic views but also sacred Native sites, biodiversity and the health of nearby communities. It focuses on five federally owned areas in the US Southwest that are the ancestral homelands of Hopi, Zuni, Diné and other Indigenous peoples: Chaco Culture National Historical Park, Dinosaur National Monument, Hovenweep National Monument, Mesa Verde National Park and Theodore Roosevelt National Park.

While lands within designated borders are protected areas, the US Bureau of Land Management (BLM) can lease parcels for drilling right up to these boundaries. At Theodore Roosevelt National Park, nearly 75% of the surrounding Little Missouri National Grassland has been leased for oil and gas development, according to the report. And many existing leases have already been developed in the surveyed regions, where oil and gas activity occurs as close as 20 miles from park borders. Natural gas flaring, mono-nitrogen oxide emissions and dust threaten an ecosystem already burdened by the climate crisis.

The July report was authored by Archaeology Southwest, a Tucson, Arizona-based nonprofit that works to protect heritage places, and the Coalition to Protect America’s National Parks, which represents over 2,200 current, former and retired employees and volunteers of the National Park Service. The All Pueblo Council of Governments (APCG), an organisation representing Pueblo Nations of New Mexico and Texas, and several Indigenous tribes reviewed the 30-page document.

Paul Reed, a preservation archaeologist with Archaeology Southwest, says the groups produced the report in response to increased oil and gas activity over the last decade that coincides with the development of new mining and fracking technologies. For instance, BLM announced plans within the past ten years to make more than 10,000 acres of public land near Mesa Verde National Park, which protects nearly 5,000 archaeological sites, available for leasing.

The authors also hope to mitigate the damage of former President Trump’s “energy dominance” agenda, which eliminated safeguards intended to ensure well-managed oil and gas activity. “Our move was really to get the public talking about it and take advantage of having an administration that wants to move in the direction that we feel is best for the environment,” Reed says. “With the Biden administration, we now have a sympathetic ear in Washington. We need to move on this. We don’t want industrial development on the doorstep of America’s most special places.”

The report outlines several actions that Congress can take, including closing surrounding park lands to new oil and gas leases, establishing new protective designations around these federal lands and developing consultation protocols with tribes. Its authors are also calling for new plans to reclaim and restore leased parcels of land where wells have been abandoned. More ​​than 140 orphaned wells, they say, sit within 30 miles of the Hovenweep National Monument, which protects the remains of six ancestral Puebloan villages.

Native groups have long called on the US Department of the Interior to work with them to identify no-leasing zones in culturally significant landscapes. APCG, for instance, has demanded greater protections for the Greater Chaco region, home to the Chaco Culture National Historical Park. Sacred spaces of Pueblo and Navajo peoples are preserved within the New Mexico park, but many more sites, from massive stone buildings known as Great Houses to Chacoan roads, lie beyond its boundaries. According to Archaeology Southwest’s report, BLM has leased nearly 92% of the land surrounding the park to oil and gas companies, which have already drilled more than 37,000 wells.

Tens of thousands of wells also dot the areas surrounding Dinosaur National Monument on the border of Utah and Colorado, which protects traditional sites related to the Fremont people. Their ancient culture is seen by present-day Zuni as material evidence of their ancestors. “Any harm to sacred sites and other cultural resources within the monument results in emotional and psychological trauma for the Zuni religious leaders and their community,” the report says.

From the start, the authors frame the issue of energy development as more than an environmental threat and one that concerns racial equity. Under Executive Order 13983, they write, “the administration has an historic opportunity to uphold its commitment to protecting the ancestral homelands and sacred sites of Tribes”.  The order—the first Biden signed upon his inauguration in 2021—calls for federal agencies to advance racial equity and support for underserved communities.

This approach reflects Archaeology Southwest’s own commitment to consult with Native groups, who are disproportionately impacted by resource extraction. “Over the last five to ten years, we’ve really gone through a reorientation in how we want to conduct our work and prioritise protecting lands that our Indigenous and our Native partners have said are important,” Reed says. “We feel like their voices have not been heard, nearly strongly enough, as we manage public lands.”

A difference of opinion among Native groups on the use of some of these lands, however, complicates this work. In November 2021, the Biden administration announced plans for a 20-year ban on oil drilling within a 10-mile radius around the Chaco Culture National Historical Park. Groups such as APCG, which worked with Archaeology Southwest to fight for these protections, celebrated the moratorium, but the Navajo Nation opposed it. Its council instead proposed a five-mile buffer to protect the interests of individuals and families who own land in the area. As Grist reported, many of these allottees can lease their lands to oil and gas companies and were concerned that their livelihoods would be affected.

Reed, who worked for the Navajo Nation Archaeology Department for 14 years, says he does not know of any other Indigenous group or tribe in the Southwest that opposes the planned protections of the Chaco region. “One of the things that we’ve emphasised is that moving to protect pieces of federal land, removing them from mineral extraction, would not and will not impact the rights of any Indigenous groups and tribes to develop the resources as they see fit,” he says.

He adds that in the case of Chaco, misinformation has led to much of the pushback.  “Folks have been told straight out by who knows who exactly, that they wouldn’t be allowed to develop their lands, get power, electricity and water if they have parcels within the ten-mile zone. There’s some oversight by the Bureau of Indian Affairs, but individual folks have a number of different options for economic activity and the administrative withdrawal really would not impact that.”

Archaeology Southwest is calling on the Department of the Interior to work quickly to make its proposed reforms permanent.

“Now’s the time for the federal government to think harder about protecting these places and doing set-asides, maybe employing buffer zones, to have those areas considered for other parks and monuments,” Reed says. “These are areas that Americans universally want to see protected. So we don’t feel like there should be much controversy at all about this.”