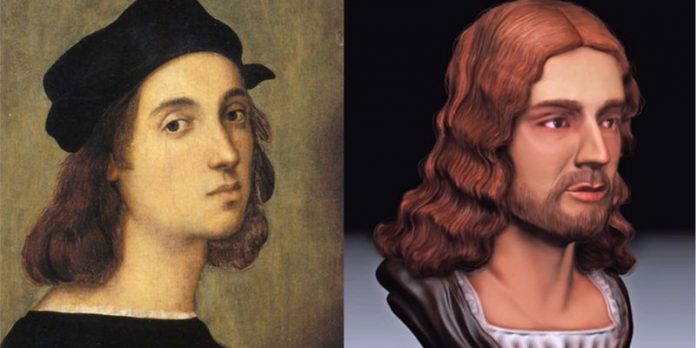 Italian art historians have created a three-dimensional reconstruction of the artist’s face. With the help of modern technology, they managed to unravel the mystery of his final resting place. Scientists from Italy have denied rumors that Santi did not have the head in the tomb. In 1833 the artist’s sarcophagus was opened. It turned out that the skeleton was intact, but many doubted that the remains belonged specifically to Raphael. This year marks the 500th anniversary of Santi’s death, that is why Rome decided to reconstruct the artist’s face by scanning the skull.

Researchers from the University of Rome Tor Vergata have reconstructed the face of the great Italian painter Rafael Santi. Now scientists are sure that the artist is buried in the Pantheon of Rome. Researchers made facial reconstruction from a plaster cast of Raphael’s skull and compared it with all possible images of the Renaissance master. The experts concluded that the coincidence is obvious.

Thus, now we can definitely say that Raphael died in 1520 in Rome at the age of only 37 years old and was buried in the Roman Pantheon. In addition to him, there were other remains in the grave, so for a long time, scientists were not sure that this body belonged to him.

In the course of the study, experts also found that Raphael really liked to portray himself in self-portraits younger than he really was. In addition, he distorted the shape of his nose.