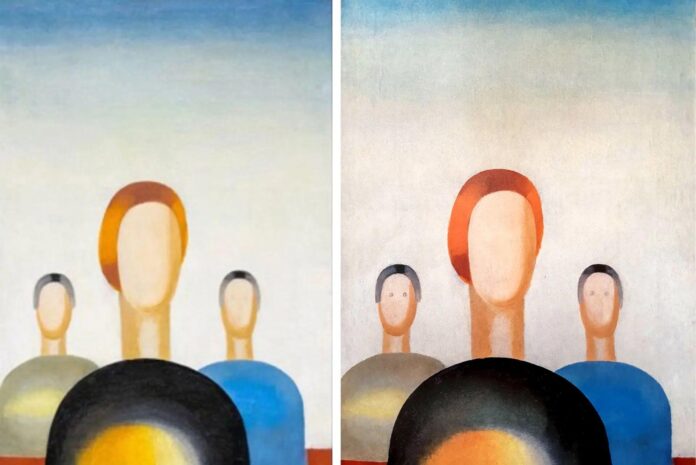 A magistrate’s court in Yekaterinburg, Russia, ruled today (29 August) that a security guard at the city’s Yeltsin Centre who doodled eyes onto a 1930s painting by avant-garde artist Anna Leporskaya last December was guilty of vandalism and must serve 180 hours of “compulsory labour” and undergo “psychiatric evaluation”.

Moscow’s State Tretyakov Gallery, which had loaned the painting, reportedly worth 75 million rubles ($1.2m), to the Yeltsin Centre, refused to petition for charges to be dropped against the guard, 64-year-old Aleksandr Vasiliev, despite his tormented life as a veteran of the Afghan and Chechen wars, the death of his wife and murder of his son.

Leporskaya was a student of Kazimir Malevich.

In a letter earlier this month to Vasiliev’s lawyer, Aleskei Bushmakov, which he posted on his Facebook page on 15 August, Zelfira Tregulova, the general director of the Tretyakov Gallery, wrote that “taking into account the circumstances of the criminal case, the damage inflicted to the painting Three Figures” and “the high level of public attention in connection with the incident”, the museum considered closing the case “via reconciliation” but in the end decided that it “does not regard it as possible to take such an appeal to the magistrate”.

At a hearing on 19 August, Bushmakov said that Vasiliev had asked forgiveness of the Tretyakov, the Yeltsin Centre and the state, It’s My City, a Yekaterinburg publication, reported. The 250,000 ruble ($4,100) cost of restoring the painting was covered by insurance.

“So what now? Execute him? Hold a public flogging?,” asked Bushmakov according to the publication.

Like most things in Russia today, the case has taken on political overtones. The Yeltsin Centre has been under attack for years by Russian nationalist Oscar-winning film director Nikita Mikhalkov, who says the centre is a bastion of anti-Russian, pro-Western liberalism and should be closed. The American-style presidential centre and affiliated art museum where the Leporskaya painting was shown was founded in 2015 to commemorate Boris Yeltsin, Russia’s first post-Soviet president, who launched his political career in Yekaterinburg. He died in 2007 after hand-picking Vladimir Putin as his successor.

In June, Mikhalkov said on his popular YouTube channel that the Yeltsin Centre should be declared a “foreign agent”, a repressive label often used by Russia’s Ministry of Justice to restrict free speech.

The centre is now being watched even more closely following the arrest last week in Yekaterinburg of Yevgeny Roizman, a popular opposition politician who was previously the city’s mayor and founded Russia’s first private icon museum there in 1999. He was arrested for speaking out against Russia’s unprovoked invasion of Ukraine. A judge released Roizman to wait out his pre-trial period at home, with some restrictions to communications and movement, a dramatically liberal move in today’s Russia’s that appeared to reflect Kremlin concerns about Yekaterinburg as a potential centre of protest.

The Art Angle Podcast: Marc Spiegler on the Evolution of the Art Business (and Life After Art Basel)