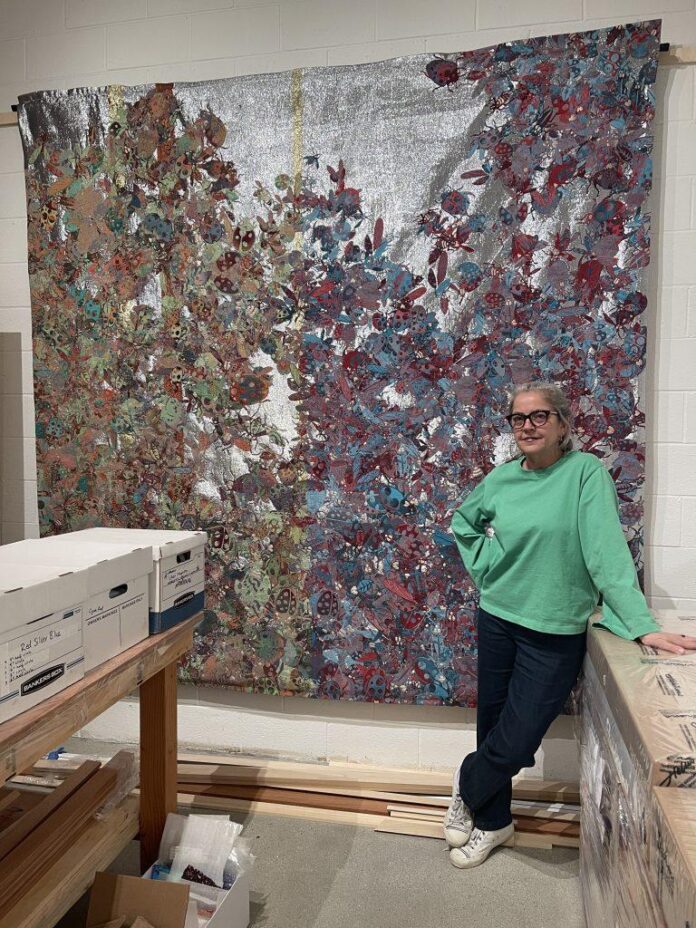 White’s first show with her new gallery, Jessica Silverman in San Francisco, features both of these kinds of work, with White’s “paperclay” sculptures as well as new ceramic serpentine forms climbing up wooden columns in a work titled .

A quintet of large-scale tapestries, woven in cashmere, cotton, and metallic thread, depict images drawn from nature, such as snails or falling leaves, reflecting the ecology of White’s second home at the Sea Ranch in Northern California.

In the days after the opening of “Pae White: Slow Winter Sun,” the artist took the time to walk us through her space and share how it shapes her artistic process.

I found my studio in 2019. It was a total fluke. I was driving around a nearby neighborhood of Lincoln Heights and came across a small industrial building on a quiet street. The roll door was open and I could see that an artist was painting inside. I ached with jealousy, but drove on and continued to drive by it for a half a year or so (in hopes).

In the meantime, I set up an alert with very specific parameters on a commercial real estate website. A few weeks later while I was in the dentist’s chair, I received an alert and there it was! I called the broker immediately but could barely speak through the novocaine. It turned out that the current tenant was an artist friend of mine and he gave me a solid endorsement.

I adore my studio, but sadly, as the neighborhood is being developed, toxic waste is being unearthed, and I am looking to possibly move to another location. 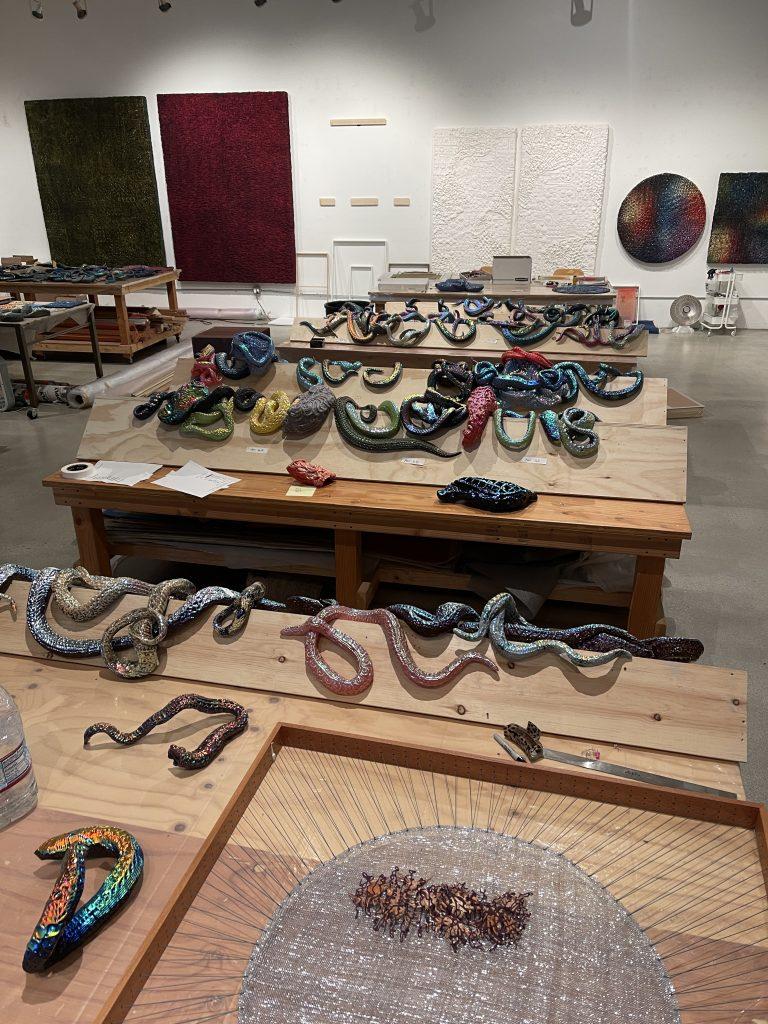 Pae White’s work in her studio. Photo courtesy of the artist.

It absolutely depends upon what I am working on. I don’t have any ritual to speak of, and approach matters differently if I am working directly on a delicate piece vs. an artwork that requires approvals. Regardless, I am very fidgety, and as soon as I start one thing, I simultaneously start working on one or two others.

My greatest focus occurs when it comes to anything technical, such as setting up files for a tapestry. Each one of these pieces has its own unique software. When I choose the final threads, it’s excruciating because I have to consider so many variables, such as material compatibility, availability, adjacencies, thread tension, color, etc. Sometimes, it takes me four or five hours to set up the worksheet alone. During those hours, I won’t move, nor can I listen to any music or have interruptions.

Typically there are three, sometimes four people on the in-studio production team. The in-studio team works on hands-on assembly of paper tapestry projects and sewing textile pieces, as well as ceramics. Testing new materials and approaches also happens in the studio, unless I go to Mexico or Belgium or Singapore, etc. There is an in-studio production manager, Michael, who oversees this area of work and coordinates with trades such as kilns, PVD chambers, and clay procurement.

The offsite team includes three other people who work in larger scale fabrication and technical production such as working with a loom, as well as production management and bookkeeping. Some people are remote and some work at my home studio, about five minutes from my production studio. Ideally, we would all be together in one space, and every year I promise to make that happen. 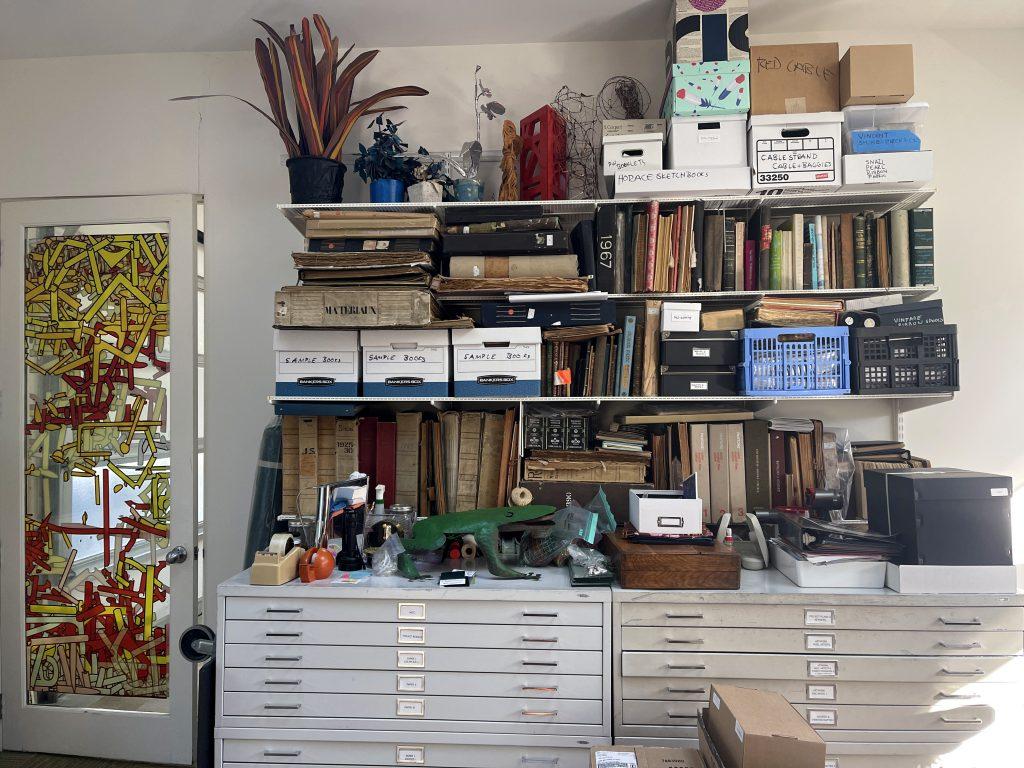 Since I just opened a show, the studio is pretty empty. We are currently finishing up some paperclay pieces that were in process before the exhibition, but are going to move into new areas of exploration, such as making sculptural forms incorporating landscapes with handmade paper. These will be illuminated from within somehow.

Is there anything you like to listen to/watch/read/look at while in the studio for inspiration or as ambient culture?

If I am involved in a repetitive task, I like to listen to podcasts. Music manipulates my decision-making process too much, so I keep it pretty plain sound-wise. I use the app AUDM to listen to stories from major publications and newspapers such as the , , , ,, , etc. It’s a huge range of articles covering every issue imaginable. The stories I have in the queue include those about Alex Murdaugh’s downfall, end of life issues, the father of the abortion pill, and new ways to coexist with animals in the world, to name a few. 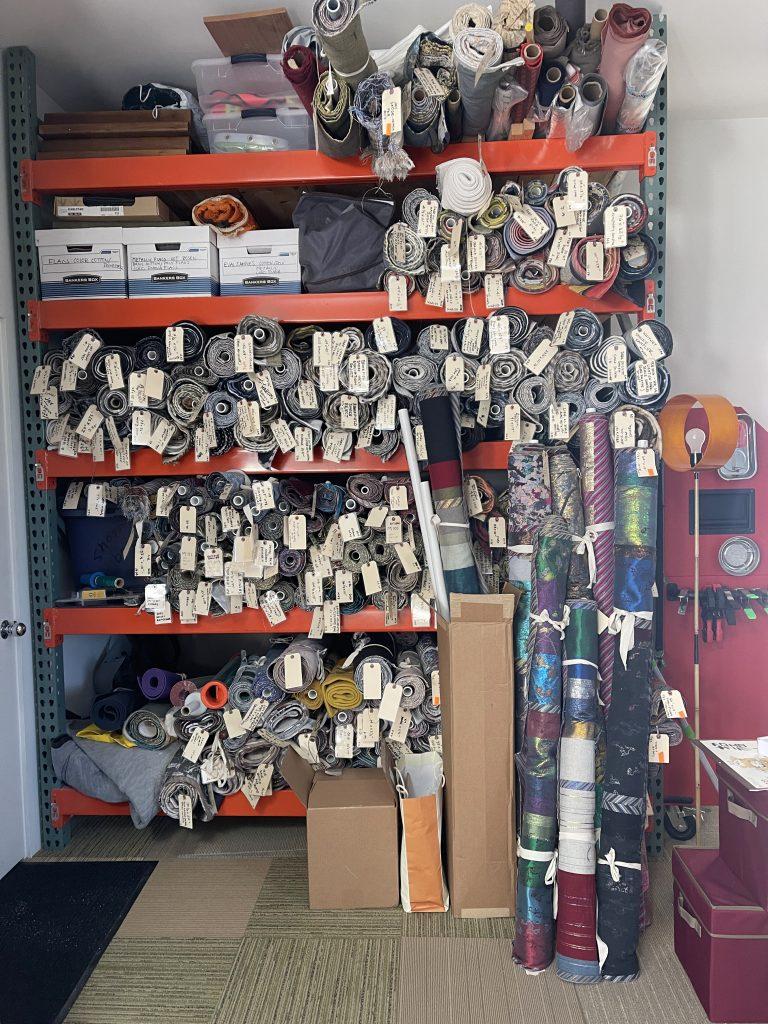 I would have to say textiles, especially those that I develop with a loom outside of Ghent, Belgium. I have worked with the family that owns the loom for well over 20 years. I have seen many changes within this family over the years, and they have been there and have always been extremely supportive of developments in new bodies of work that challenge the loom—to the point of sometimes breaking it.

My interest in textiles has been a constant, and I love the potential for a piece to go on forever. One of my greatest joys is to spend four days on the loom testing threads with ideas. It’s dreamy and rigorous and we sometimes cry and are overjoyed with technical triumphs that most people would find boring. It almost feels like an improvisational jazz session where there are lots of small changes that make a huge overall difference.

My early days with the loom involved illusion with cotton and polyester thread. Since then, I have moved to much more direct pictorial representations that try to fool the viewer into thinking that the pieces were slowly and thoughtfully hand embroidered, even though the loom is a loud, oily, industrial monster of a machine. 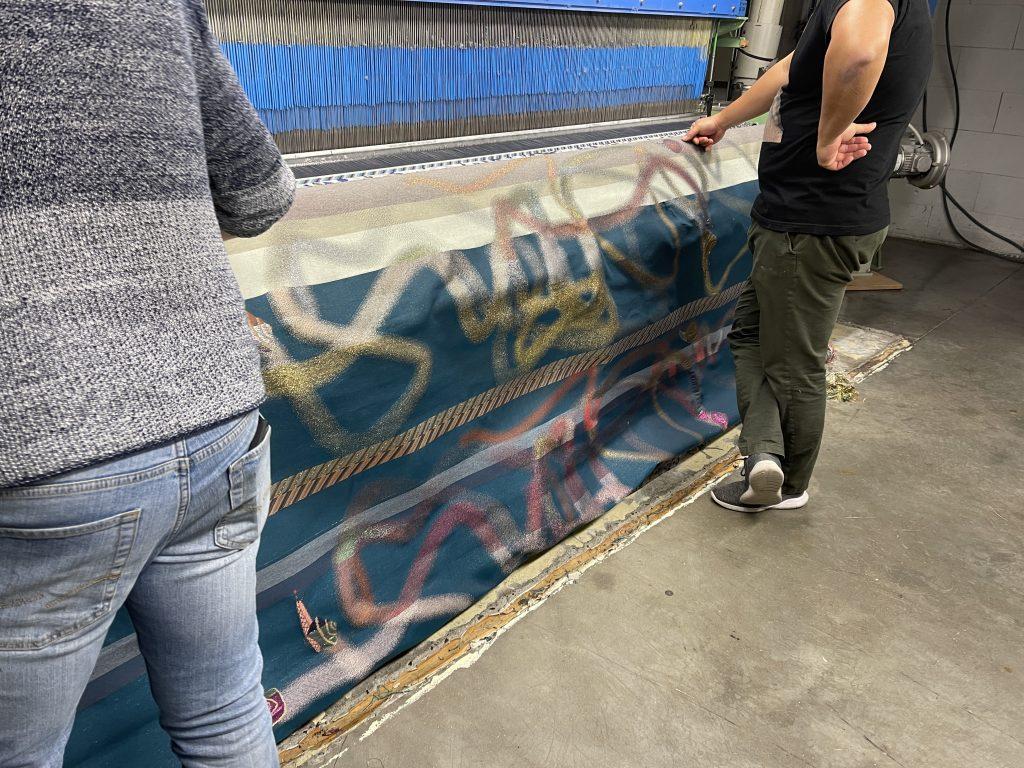 A Jacquard loom at work on a Pae White tapesty. Photo courtesy of the artist.

My home studio is where I spend most of my time, because I am not comfortable about making work, or even experimenting, with people around. The studio involves a few incredibly crammed dysfunctional spaces with tables in the middle where I am constantly banging into things or having to move a pile in order to introduce another pile. I sit at these tables and work.

It is a very meaningful place for me, as I can experience the garden through the windows and be surrounded by my animals, which is key. On the other hand, it also prevents me from having regular studio hours as I am in there all the time and late into the night, and hence don’t have much separation from my personal and art-making lives.

Do you have any other artist’s work in your studio?

I actually have a ton of work by Jorge Pardo. In fact, I believe I have the largest collection of his work in the world. We started dating very early in his career, and he would often give me work as gifts since he was broke, or probably because he was cheap. Sometimes I would rescue pieces that were stored outside or otherwise abandoned. I love every single piece, but also find that a significant part of my studio is devoted to storing this work.

The most visible piece is this wavy bench which I won at a raffle at his studio’s annual Christmas party. Every year he would host a holiday party for the studio and every year there would be a raffle with his artwork as the prize.

I don’t think his team wanted to see more of his work than they were already seeing on a daily basis, so they never would buy the $5 tickets. All it would take was $20 to virtually guarantee the win. Eventually I stopped buying tickets because it wasn’t fair that I would win every year! 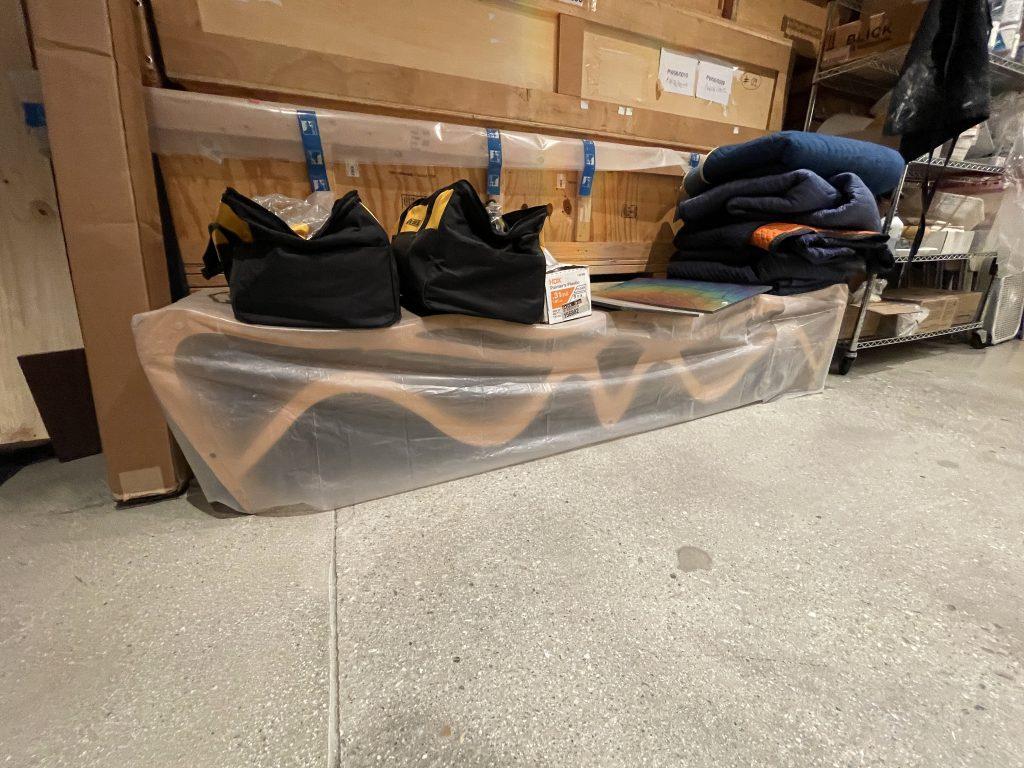 A Jorge Pardo bench in Pae White’s studio. Photo courtesy of the artist.

I think about Millard Sheets. He was truly a polymath of the arts. He produced drawings, prints, watercolors, oil paintings, bronzes, architecture, mosaics, fountains, furniture, and more. He is my ultimate model of an artist who is undaunted by scale, challenges or criticism. He was someone who 100 percent believed in himself and his abilities.

I had the privilege of knowing Millard and his family, and it forever changed my life. It is pretty much why I chose to pursue a risky career that in which one is always being asked to believe in oneself.

An Ancient Portrait of a Mystery King Has Been Unearthed at the Foot of a 4,300-Year-Old Pyramid in China

Remembering Vivienne Westwood, godmother of punk and designer to the art tribe, who has died aged 81