Home News See the Artist-Designed Balloons That Have Taken to the Street (and Sky)... 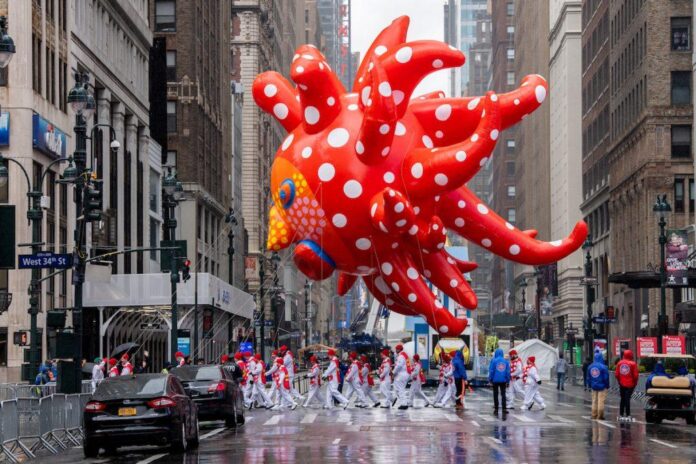 At the inaugural Macy’s Thanksgiving Day Parade in 1924, animals, rather than balloons, were the star attraction. As the event matured, the inflatables it floated into the Manhattan sky came to represent the great and good of contemporary American culture: Snoopy, Ronald McDonald, SpongeBob SquarePants, Smokey Bear, to name but a handful.

Beginning in 2005, the parade organizers began tapping contemporary artists to create balloons through its Blue Sky Gallery. Just as the event heralds a changing of seasons and the arrival of Christmas festivities, so too a Macy’s commission can be seen as affirming an artist’s status among the world’s most popular and commercial creatives.

Here are some of the artist-designed balloons to have flown the Macy’s Thanksgiving Day Parade. 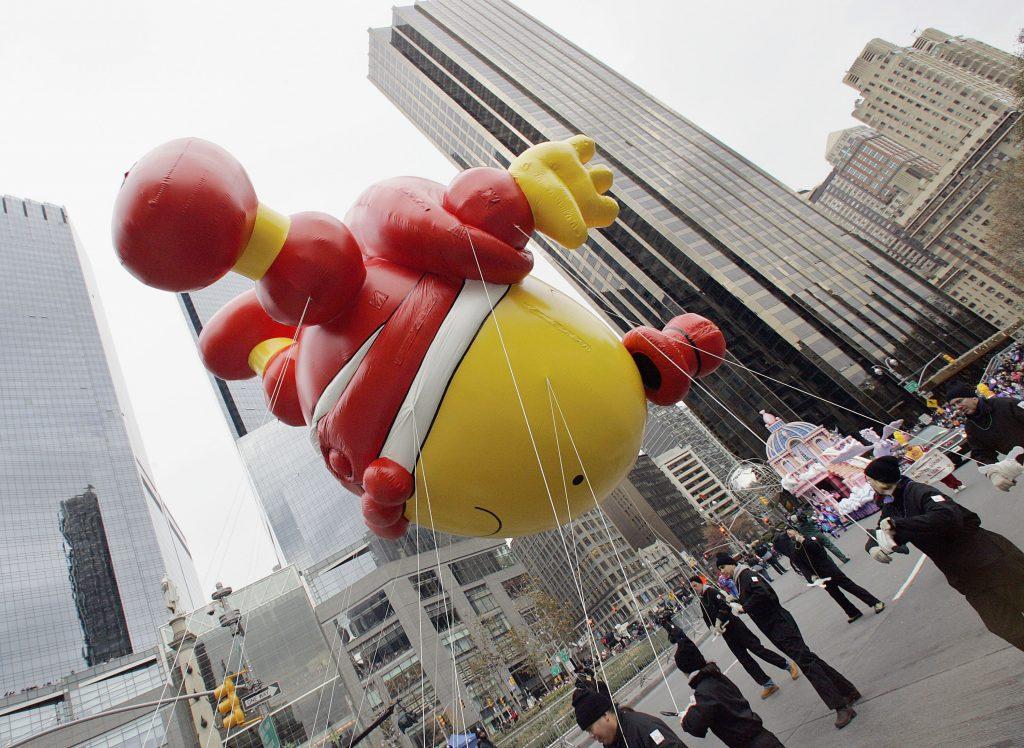 The American sculptor was no stranger to large-scale installations, having placed his playful bronzes in public spaces since the late ’70s. His balloon, which depicted the English nursery rhyme character flying rather than falling, arrived in the wake of “Otterness on Broadway” his largest-ever exhibition that stationed 25 works on the Upper West Side. Otterness had one of the king’s men accompany Humpty in the form of a life-sized puppet. “I grew up in Kansas where the Macy’s Day Parade was the biggest thing,” Otterness said. “I like the idea that this is in people’s living rooms.” The balloon has since been retired, following the surfacing of an “indefensible act” of animal cruelty in the artist’s past. 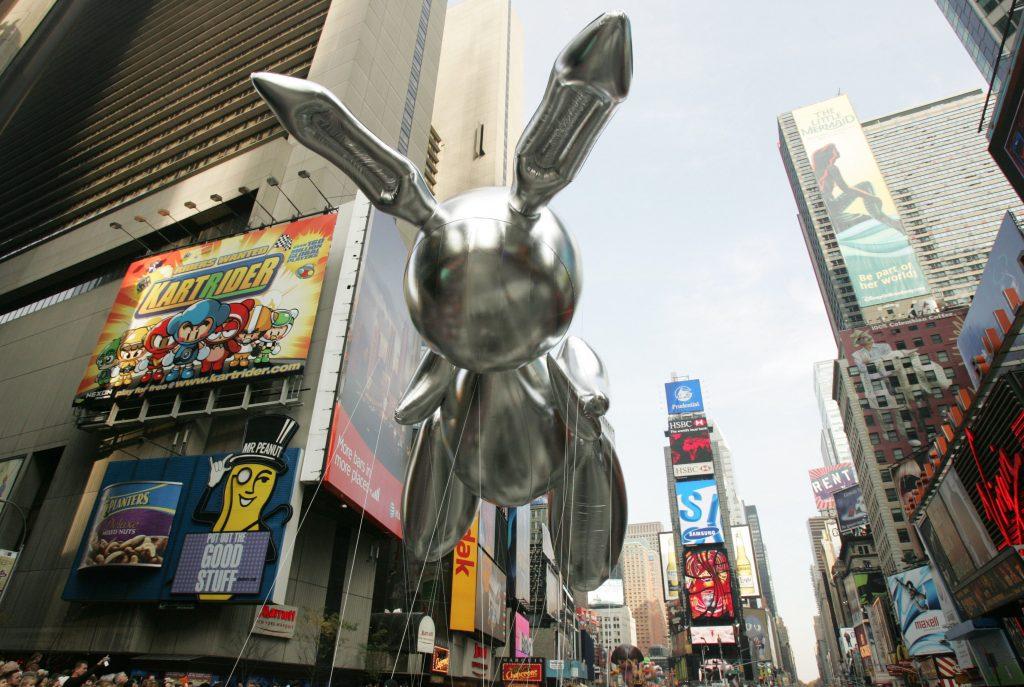 This time, the balloon was actually filled with helium. A decade on from dropping his mirror-polished, stainless-steel animal sculptures on the art world, Koons created a balloon that could fly. It was crafted out of a reflective nylon and measured 53-by-26 feet. “As it moves through the environment, it takes on its surroundings—the blue of the sky, the green grass, the crowd,” Koons said of the work. “It is always changing.” The balloon would later be flown to London for a Pop Art exhibition at the Tate.

The Keith Haring Foundation wishes everyone a healthy and happy Thanksgiving. pic.twitter.com/w7JlI014Vf

Supposedly, the New York street artist always dreamed of watching a balloon in his aesthetic styling soar through the city sky. Eighteen years on from his death, this wish came true on what would have been his 50th birthday. It later fronted the main entrance to Central Park’s AIDS Walk in 2014. The balloon is also remembered for crashing into NBC’s onsite booth and taking its broadcast temporarily off air. 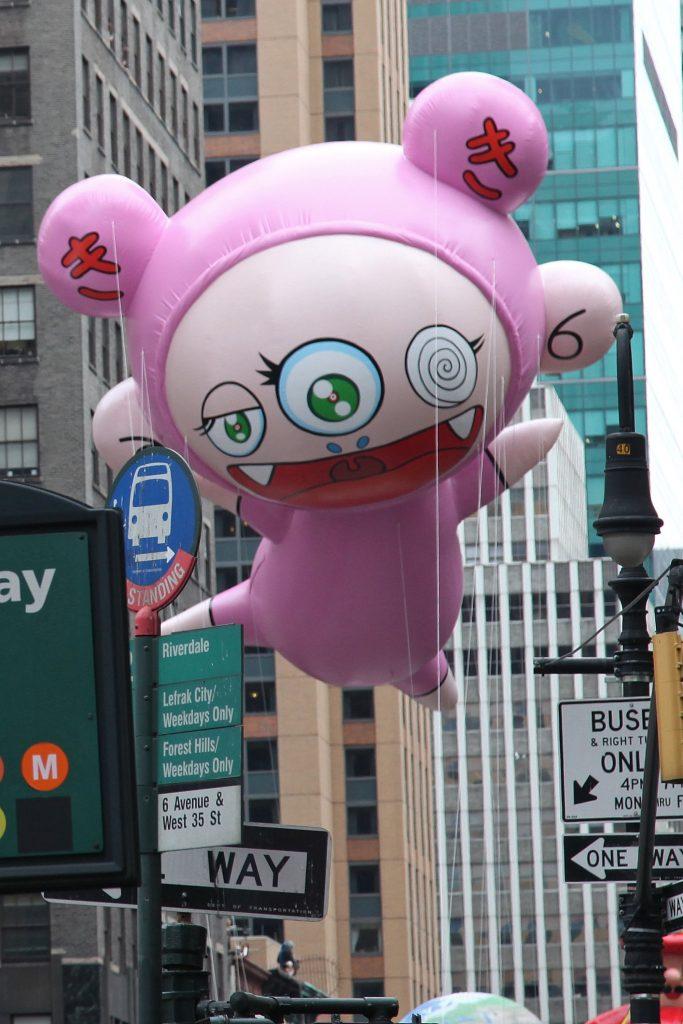 Ever the keen self-promoter, contemporary pop artist Murakami personally pitched the idea of floating balloons with the parade organizers. He chose to create 40-foot versions of his characters Kaikai and Kiki, a pair he described as “cute yet fearsome, modern yet connected to the past.” After tinkering with the proportion of their head and limbs to ensure they could fly properly, Murakami joined his balloons by walking the parade in a fluffy green onesie topped with a signature flower for headgear. 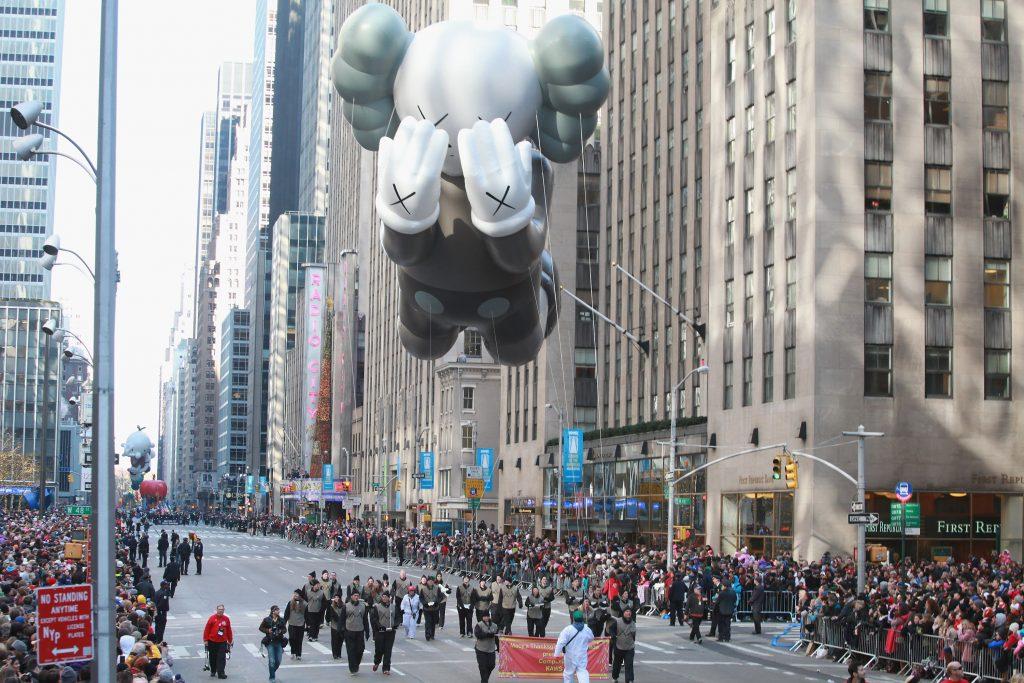 In contrast to the beaming smiles of Mickey Mouse and Pikachu, Brian Donnelly—aka KAWS—brought a forlorn, hand-covered face to proceedings. , a figure the ex-Disney illustrator has repeatedly recreated over the past two-and-a-half decades, has popped up in Hong Kong’s Harbor, Tokyo’s Shibuya Crossing, at the Millennium Bridge in London. Last year, KAWS took the idea of his Macy’s balloon a step further with , a hot air balloon version of the work which invited passengers on board. 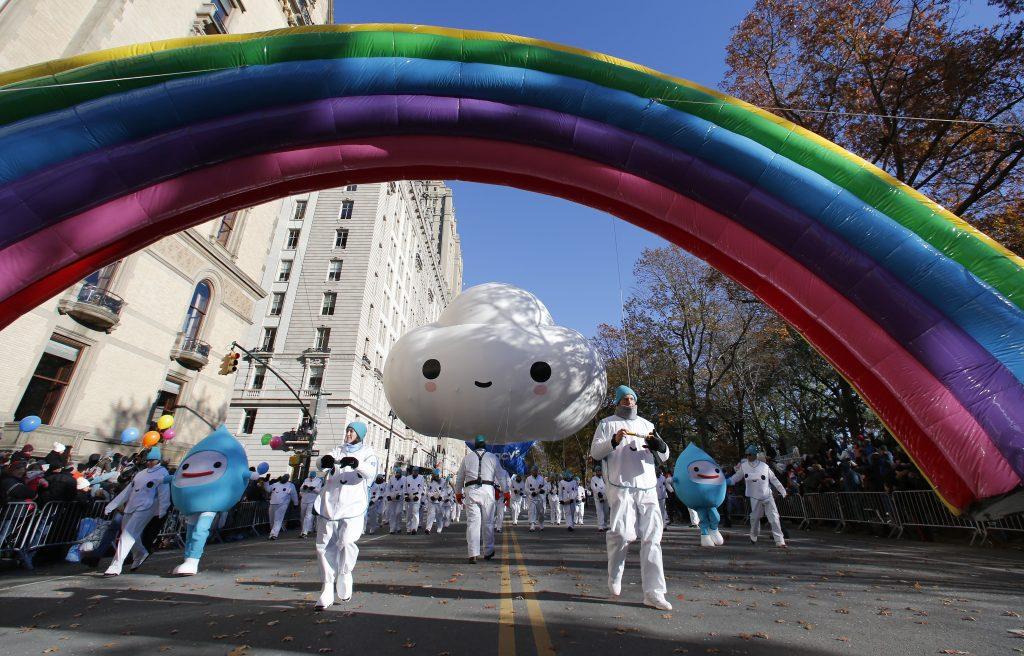 In 2006, Los Angeles art collective FriendsWithYou staged its very own procession of balloons at Art Basel Miami Beach with , a collection of 18 giant blimps that required the hands of 300 high school volunteers. Twelve years on, they brought their signature cloud to New York, a perfect match for a spectacle all about family fun. As the event’s executive producer Susan Tercero said, “Their cloud is cute and whimsical. What better balloon to create than a cloud?”

For the 1st time ever, a woman-designed balloon will be part of New York’s Thanksgiving #MacysParade.

This is Yayoi Kusama’s “Love Flies Up to the Sky” #草間彌生 pic.twitter.com/ACWKlf2pJX

To celebrate her 90th birthday, the Japanese artist unveiled a balloon that combined her most distinctive elements: a bizarre face, tentacles, and, of course, polka dots. She was both the first female artist and the oldest to receive a commission. The octopus-sun-clown creation riffed off motifs the artist developed in her painting series. The balloon had an inauspicious debut when, during parade preparations, strong winds ended up puncturing the face and ripping open one of its tentacles. It flew drama-free in 2020.