Home News See the Freshly Commissioned Artworks That Meta Is Unveiling at Its Sprawling... 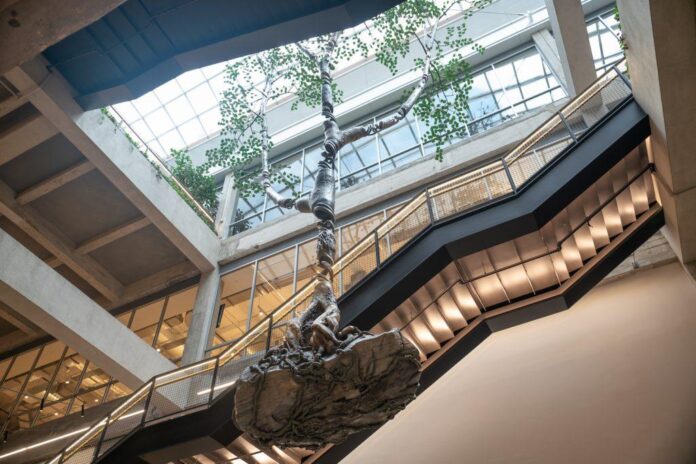 Meta is poised to make a splash in the New York City art landscape and beyond when it welcomes employees to its new offices at its massive Farley Station location on the West Side of mid-town Manhattan this fall.

Meta, the parent company of Facebook, is the largest tenant in the transformed former post office, which now includes the gleaming new transit hub Moynihan Station. Meta occupies 700,000 square feet and through its Open Arts platform, commissioned five, site-specific works from a range of emerging and established artists, all with ties to the local community. Many of the works mark the largest project for the respective artists to date. The results, some of which are visible to the public, are impressive to say the least . 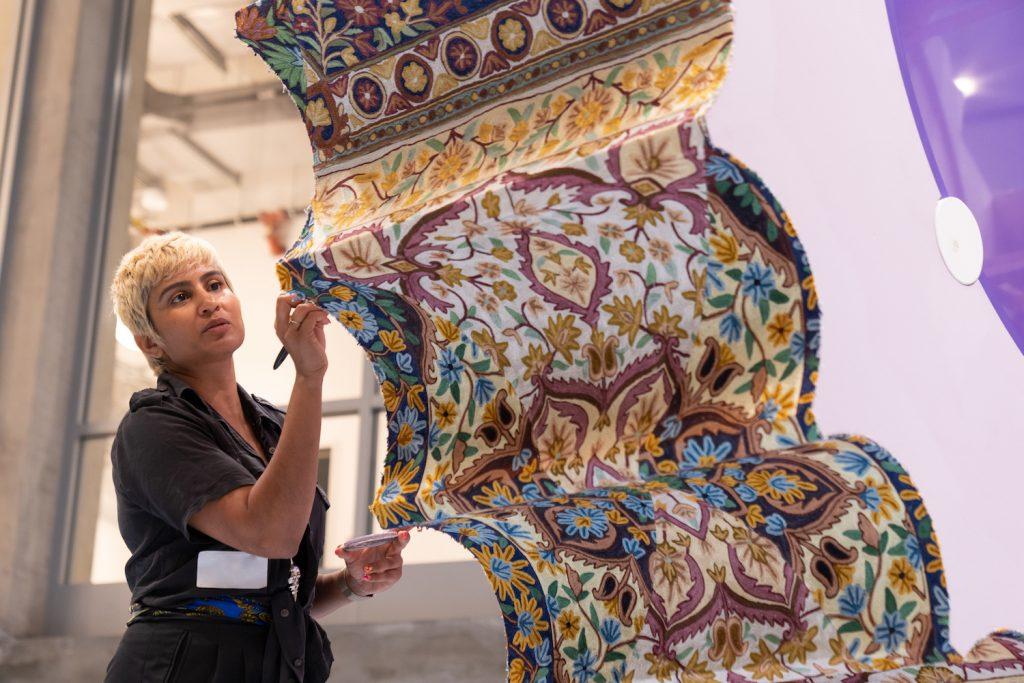 The Farley Station building, which still has an operating post office, “has been at the center of how people connect with each other and communicate with each other,” said Meta Open Arts head Tina Vaz, who was formerly deputy director of global communications at the Guggenheim Museum. “So for Meta to be here now, in this hub, feels really special,” she added.

Vaz took Artnet News on a tour of the new space and the commissioned works late last month. All but one of the pieces were fully installed at the time, with the exception of the largest work at the center of the building, artist Timur Si-Qin’s , a 50-foot tall, two-ton, stainless steel and aluminum, suspended sculpture, that he created and engineered to span the four-story skylit space. 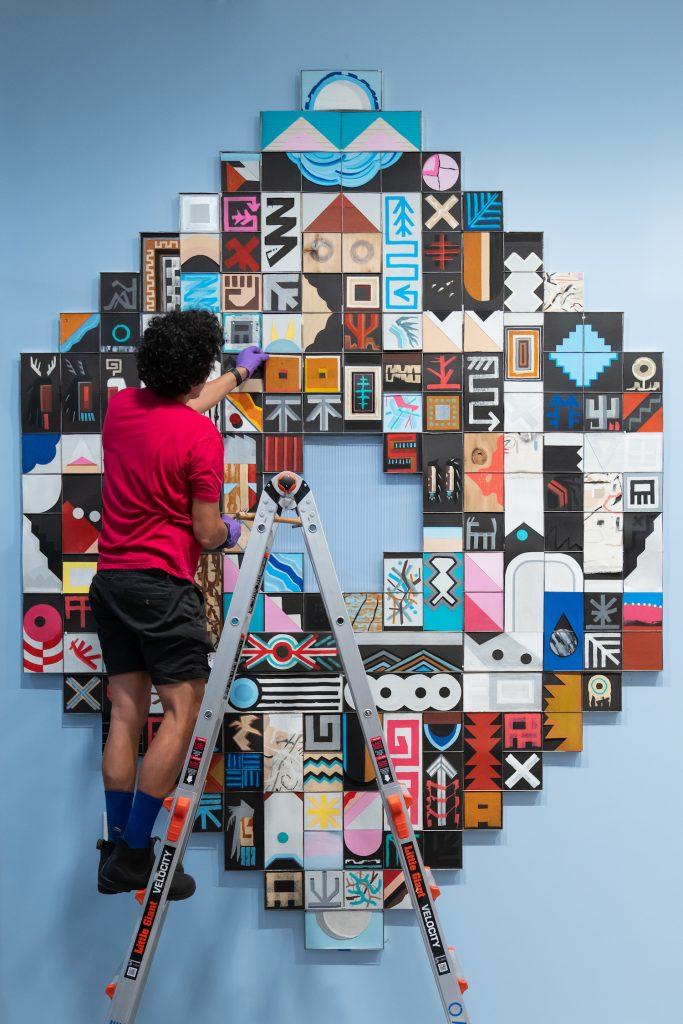 Matthew Kirk at work on the piece commissioned by Meta for its new offices in New York at Farley Station. Photo by Bradford Devins/OWLEY

The work, which is based on the ancient symbol of the Tree of Life, represents the interconnectedness of all things. Vaz explained that Si-Qin scanned various tree species in the Catskills and the Adirondacks and then turned them into this sculpture which “plays with science and the DNA helix.” It represents “this intersection of physical and digital words at the heart of our program and much of the work we commission,” she said.

Fresh off a solo show that just wrapped at the Brooklyn Museum, artist Baseera Khan created a two-part installation that includes a major sculpture and a mural located in a main area of the second floor offices. 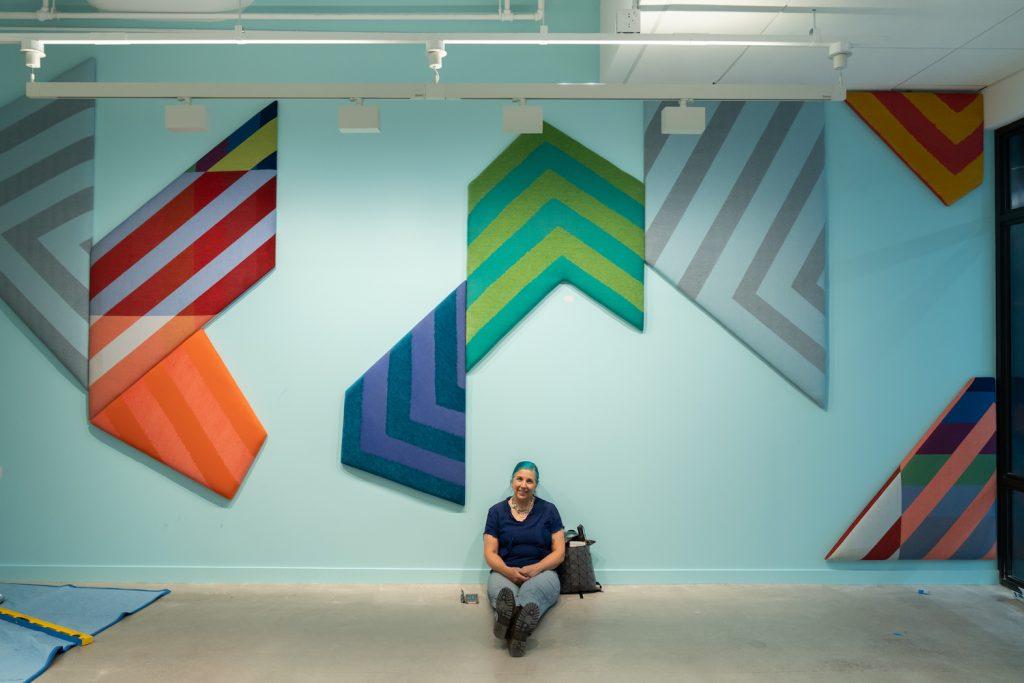 The large sculpture references a Corinthian column, and is composed of a hollowed-out column form, the exterior of which is wrapped in handmade silk rugs created by men and women in Kashmir, a Muslim-majority disputed territory between India and Pakistan that was once under the rule of British colonizers.

“Wrapping power with power,”  is how the artist has described the work in a statement. Khan further pays tribute to the craft and labor behind Kashmiri rugs by enlarging the patterns into a nearby, hand-painted mural that spans over 50 feet. Khan was born in Denton, Texas to Muslim immigrant parents from India and today lives in Brooklyn. Throughout their practice, the artist uses a range of media to examine patterns of exile and modes of decolonization. 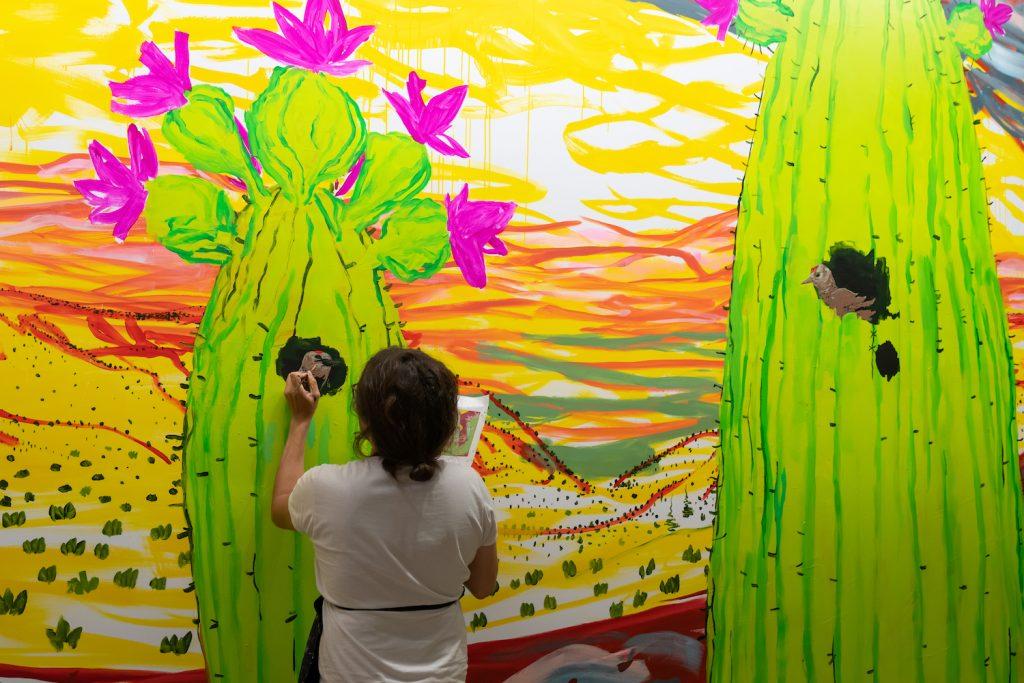 Long Island City-based artist couple Esteban Cabeza de Baca and Heidi Howard’s two-component piece, , is meant “to evoke an empathetic relationship with plants, other animals and the land,” according to Howard.

In the building’s “Ring Lobby”, which is visible from the  waiting area of the Moynihan train hall, Brooklyn-based artist Liz Collins has applied her signature, vibrantly-colorer textiles to create , a sprawling  installation across four walls spanning more than 100 feet in length. 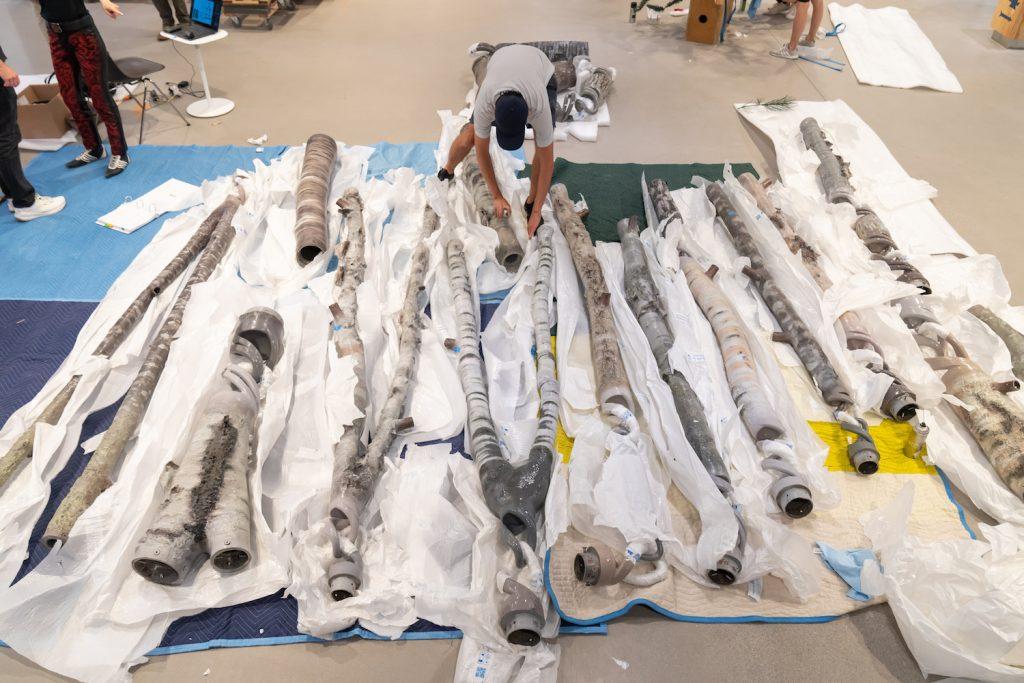 Vaz explained that the artist mines patterns found in New York street signage, roadways and trucks to create zigzag-striped textiles. The works are also created on a Jacquard loom, which Vaz notes is “widely considered a precursor to technology and modern computing,” via the loom patterns, circles and lines.

The last works we viewed were by Matthew Kirk, including the stunning , which spans 22 feet in length, and which measures eight feet across and 11 feet high. Kirk is an enrolled member of the Navajo nation, who was born in Arizona and raised by a non-Native family in Wisconsin. He now resides with his family in Ridgewood, Queens.

Kirk’s “weaving” paintings for Meta rely on the same grid structure as the Navajo rugs of his heritage, but use modern-day construction materials woven through a steel rebar grid as the ground for the hundreds of small paintings that adorn these works, according to Vaz. The diverse imagery references a wide range of subjects from the Navajo language and rug-making to superheroes and post-industrial landscapes, resulting in “a cross-cultural hybrid language,” according to a statement from Meta. 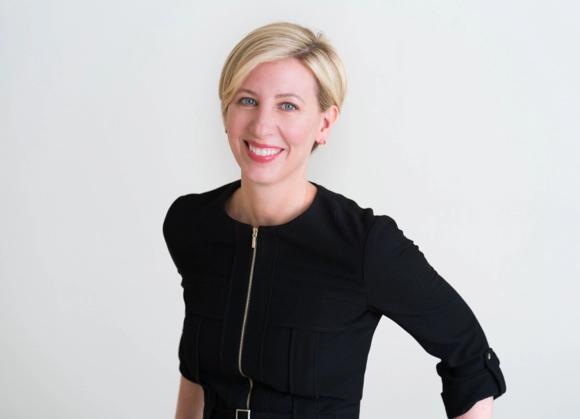 Kirk’s artwork is a prime example of what Vaz says is intended to encourage deep engagement. “All of the work we commission rewards repeat viewing, with more for the viewer to discover each day. People will be coming here every day and we wanted to create a feeling. This is not a gallery space, it’s really about process,” says Vaz, who has been Open Arts director since 2019.

Open Arts was initially founded in 2010 as a residency program at Facebook. Artists were commissioned to create work along with employees on site at the company’s headquarters, giving Facebook workers insight into the artistic process.

More recent initiatives that constitute something of a spin on the residency concept have included inviting a cohort of three artists to work with its creative AI team, which Vaz described as open-enid and more of a “knowledge transfer,” than a mandate to produce new work.