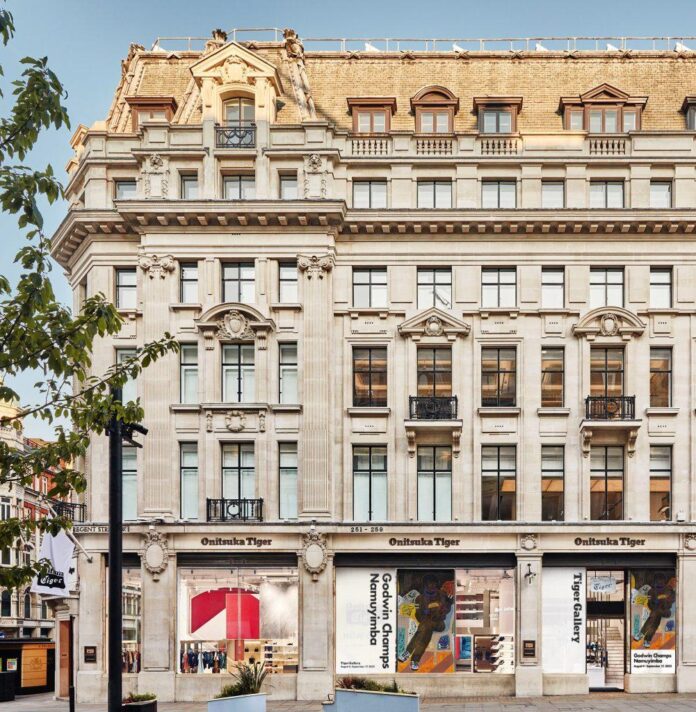 Today, the company announced that it has partnered with the fashion label Onitsuka Tiger to launch Tiger Gallery, a roving art initiative that will put contemporary work in both stores and more traditional gallery spaces.

Inaugurating the new project will be a show by Ugandan artist Godwin Champs Namuyimba that’s set to take over Onitsuka Tiger’s flagship store in London starting August 4. Future projects will follow a similar model, according to Art Intelligence Global’s announcement, as the gallery invites artist to exhibit in Onitsuka Tiger stores and shop windows, on the fashion label’s website, or at dedicated gallery spaces.

“As a long-term partnership, Tiger Gallery goes beyond the scope of a seasonal artist/brand collaboration and aims to give global visibility to a diverse range of artists,” said Terase in a statement. She explained that the project will be overseen by Jack Eisenberg, AIG’s director of artist programs.

Representatives from AIG did not immediately respond to Artnet News’s request for more information about the project, such as how many shows the gallery plans to present annually or whether or not it is considering a permanent brick and mortar exhibition space.

AIG was founded last fall, around six months after both Cappellazzo and Terase departed Sotheby’s amid a leadership shakeup atop the auction house.

Global ambition was built into the advisory firm’s design from the beginning. Cappellazzo would run AIG’s office in New York while Terase would helm its Hong Kong outpost, and both executives avowed to make major inroads with the increasingly powerful young Asian collector set. The collaboration with Onitsuka Tiger, a global streetwear brand founded as a sneaker line in Japan in 1949, aligns with the way many younger Asian collectors buy art as part of a broader luxury portfolio.

Terase, in particular, has shown a talent for cultviating this crowd. During her time at Sotheby’s, she turned Hong Kong-based contemporary art auctions into nine-figure affairs, and sometimes recruited celebrities, like K-pop superstar T.O.P and pop star Jay Chou, to organize them.

Namuyimba, who paints intimate, brightly colored portraits of family and friends, has seen his prices climb at auction over the past year and already has an audience in Asia. On November 30, his painting of a figure ironing, (2021), sold at Phillips Hong Kong for a record HK$1.3 million ($169,682), more than three times its high estimate.

Reflecting on Onitsuka Tiger’s appeal for such a partnership, Eisenberg noted the label’s “global vision and interest in contemporary artists reflect how we at AIG look at the expanding future of the art world.”