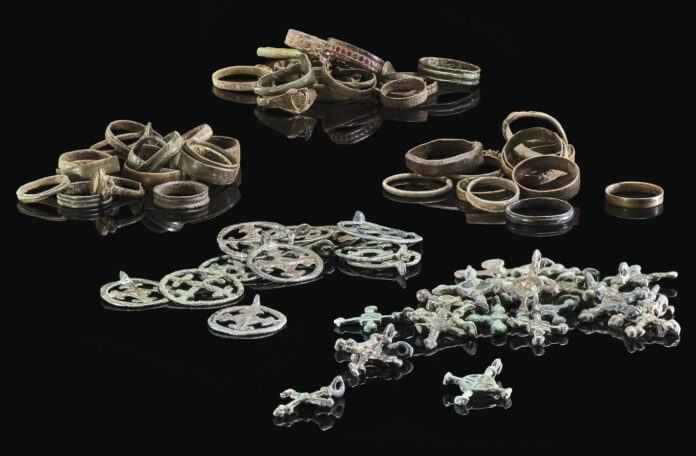 The British Museum will today unveil a collection of Ukrainian antiquities that has been seized in the UK. The early medieval jewellery, intercepted in the post last year, was illegally acquired and exported from Ukraine. The trafficked haul will be exhibited in London, until it can be safely returned to Kyiv.

The Art Newspaper can report that the 86 recovered metalwork antiquities include pendant crosses, dating from the 11th to 14th centuries, which are local copies of Byzantine prototypes. Disc pendants with a cross of a similar period, showing the influence of Christianity, are part of the hoard. There are also finger rings—some early medieval, although most are later.

Hartwig Fischer, the British Museum’s director, will be using the unveiling to speak out about the invasion of Ukraine: “Culture is fragile yet precious. We extend our deepest sympathy to our colleagues in museums, and to all the victims of this conflict, whether trapped or displaced, within Ukraine and beyond. We are working together with other organisations to provide aid and support to museums in Ukraine.”

The copper alloy antiquities were posted from Ukraine and intercepted by the UK Border Force at Gatwick airport last July. It has not been revealed whether this was a chance discovery or the result of a tip-off.

UK government agencies usually consult with the British Museum over antiquities seizures, and St John Simpson, the museum’s curator responsible for Arabia, Iran and Central Asia, was brought in to advise. Vadym Prystaiko, the Ukrainian ambassador in London, has been kept closely informed about the seizure.

A British Museum spokesperson says: “This seizure demonstrates the excellent around-the-clock work Border Force do to search, find and stop these historical artefacts entering the UK illegally, and we will continue to work with international partners to detect such items.”

The objects will now be put on display in room 53 of the British Museum until it is logistically safe for them to be returned to Ukraine. This could be many months away. The museum also has a separate small display of Ukrainian objects from its own collection, which opened in April in room 2.

Although it has not been revealed where the trafficked objects originated, they are due to be restituted to the National Museum of the History of Ukraine in Kyiv.

Simpson has been in close contact with Fedir Androshchuk, the director-general of the Kyiv museum, telling him that the return will represent “a small symbol of the reconstruction that lies ahead”. Simpson also pledged that the British Museum will do what it can to support their Ukrainian colleagues.

According to Androshchuk, in recent years “objects acquired by illicit metal detectorists in Ukraine were sold to private collectors in Russia, Germany and Britain. Some of these artefacts are unique, such as a Viking Age ship’s vane terminal found in Ukraine in 2015 and sold in England in 2016 with a fake provenance.” This was an important animal figurine that seems to have been sold through a smaller London auction house.

Androshchuk is now facing the challenges of safeguarding one of Ukraine’s major museums and the country’s antiquities: “We are facing gigantic transnational looting of Ukrainian heritage which needs to be stopped through common efforts. Today these prevention measures are strengthened by the contribution of the British authorities and the British Museum.”