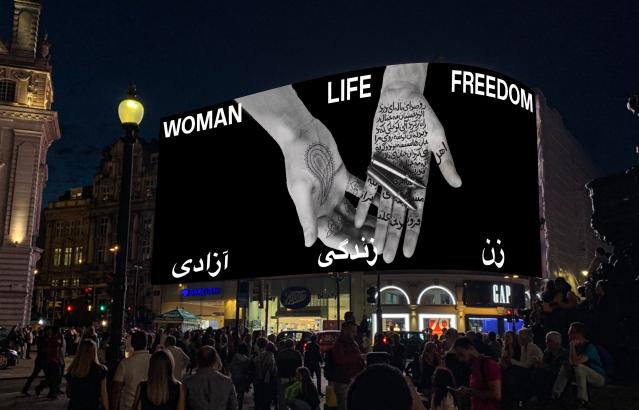 The New York-based Iranian artist Shirin Neshat has unveiled a digital art piece in London’s Piccadilly Circus and at Pendry West Hollywood in Los Angeles highlighting the deteriorating human rights situation in Iran sparked by the death of Mahsa Amini. California is considered to have the largest concentration of Iranians outside of Iran, with many immigrating after the 1979 Islamic revolution.

The initiative, known as Woman Life Freedom has been organised by the digital art platform Circa. Neshat’s work is being shown at 20.22 local time until 4 October. A time-limited print by Neshat is also available via Circa with 50% of proceeds donated to the New York-based organisation Human Rights Watch.

Woman Life Freedom consists of two works from Neshat’s Women of Allah series (1993-97): Moon Song and Unveiling. “For me, the meaning of the text and the bullets [in Moon Song] suggests the modern and contemporary reality of Iran, while the paisley and other floral motifs are symbolic of Iranians’ rich ancient Persian history,” Neshat says in a statement.

“In my view this cultural contradiction has been the Iranians’ biggest grief and dilemma who are struggling between these two opposing identities. The majority of Iranians do not identify, nor feel comfortable abiding to such oppressive Islamic codes and laws,” she adds. In the black-and-white self-portrait Unveiling (1993), the artist is seen covered with verses from a poem by the late influential writer Forough Farrokhzad.

Mahsa Amini died in an Iranian hospital earlier this month after being detained by the regime’s morality police for allegedly not complying with the country’s hijab regulations, reported The Guardian.

Mahsa Amini’s father has meanwhile accused the Iranian authorities of lying and says that her brother Kiarash was told that she had been beaten, according to the BBC.Iranian authorities say Amini was not mistreated but suffered “sudden heart failure”. Amini’s death sparked mass protests in Tehran and cities including Yazd, Isfahan and Bushehr, which have continued for more than 12 days.

Meanwhile an open letter published last month and signed by Iranian filmmakers and actors including Neshat, Ali Abbasi and Bahman Ghobadi, said: “The Iranian government has restricted internet usage and blocked access to social media platforms in order to further suppress people’s voices. Last time such measures were implemented in 2019, the Iranian government murdered 1,500 people. Independent Iranian filmmakers are standing by these fearless Iranian women and men and are trying hard to capture and document history as it unfolds with limited resources.”

Neshat has also created a collection of NFTs (non-fungible tokens) called Loss for Words commissioned by the Artwrld platform. In each piece, a pair of hands is shown slowly opening in a gesture of prayer, revealing a fragment of Iranian poetry written by various poets such as Farrokhzad, Sohrab Sepehri, Ahmad Shamlou and Nima Yushij.

“Coming from a country where we have so much censorship and so much has to be hidden, and yet so much subversiveness is in the air—this is what the Iranian people have learned to deal with: the absence of freedom of expression means finding ways of speaking without really opening your mouth,” she tells W magazine. Ten per cent of the NFT primary sales will go towards the non-profit organisation The Brooklyn Rail.

Top Tips For Portrait Photography In 2022