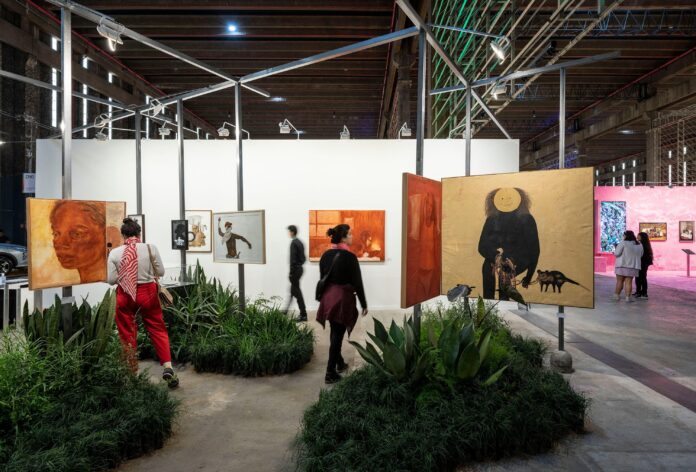 The inaugural edition of the Rotas Brasileiras (Brazilian Routes) art fair in São Paulo, which opened this week (24 August) and features 70 exhibitors, aims to highlight the diversity of cultures, traditions and artistic production in Brazil outside of the traditional São Paulo-Rio de Janeiro axis.

An enterprise of the organisers of SP-Arte, the new fair underscores the “importance of regionality”, according to Fernanda Feitosa, the director and founder of the fairs. “There is high-quality production that comes from different regions in Brazil that we do not always have access to; the fair is an invitation to this immersion.”

The art market outside of São Paulo and Rio de Janeiro is arguably very fragmented and not structured in the traditional configuration that the market is accustomed to. “Most of them are not even galleries but projects, or collaborative networks or places that function as cultural and educational spaces,” Feitosa says.

Potential exhibitors were asked to present “something different” to be included in the fair and to investigate the value of regional art in their proposals. The coronavirus pandemic also sparked the idea that “being global is good, but being regional is also very valuable”, Feitosa adds.

Many of the artists featured in the fair have never displayed their work in major market hubs like São Paulo. For example, the Baiano artist Igor Rodrigues, who is represented by Acervo Gallery in Bahia, Salvador, is showing his work outside of his hometown for the first time. The fair “opens up space for the type of art that today is understood as peripheral and not part of the art market, but that is normally consumed in large urban centers”, he says.

Renan Quevedo, the founder of the art collective Novas Para Nos (New for Us) from Minas Gerais, adds that the venture “breaks the expectation of how an art fair should be”, and that a “fair that talks about Brazil, that celebrates Brazil and that represents parts of Brazil that most people don’t know about is a very important novelty”.

Quevedo is presenting three artists from the Jequitinhonha Valley of Minas Gerais state, including Dona Izabel, who is renowned for having revolutionised ceramics in the region. In the first two hours of the public opening of the fair, three of Izabel’s six clay figures on display had been sold.

Maria Amelia Vieira, an artist and the owner of Karandash Gallery in Maceio, Alagoas, is exhibiting several self-taught artists, including the abstract sculptor like Zé do Chalé, an Indigenous artist from Sergipe who began sculpting aged 90 and died at 105 in 2008.

Brazilian folk art has always been historically considered an art of lesser importance, according to Vieira, one that is made by untrained or semi-literate artists from rural regions of the country. “This idea for the fair to mixing contemporary art with popular or folk art is very democratic,” she says, noting that there are countless talented Indigenous artists who have been overlooked due to systemic social and racial prejudice in the country.

One Great Mystery of the Pyramids’ Construction Has Been Solved. It Involves Boats