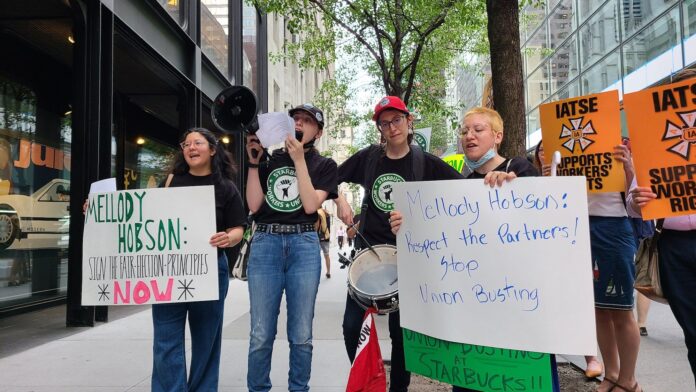 On Tuesday evening (7 June), New York’s Museum of Modern Art hosted its annual Party in the Garden fundraiser, this year honouring artist Wolfgang Tillmans, film-maker and former gallerist Linda Goode Bryant, whose legacy will be celebrated in an exhibition at the museum this autumn. Film-maker George Lucas and his wife, the celebrated businesswoman Mellody Hobson—the co-chief executive and president of Ariel Investments, the chair of the board of directors at Starbucks and, with her husband, co-founder of the $1bn Lucas Museum of Narrative Art currently under construction in Los Angeles—were also honoured at the event for their philanthropic work.

As festively dressed attendees began to arrive at the museum’s West 53rd Street entrance around 6pm on Tuesday, they were met with a crowd of union organisers wielding signs, distributing flyers and chanting in unison, “Starbucks partners under attack! What do we do? Stand up, fight back,” and, more pointedly, “Mellody, it’s not hard to see, you’re on the wrong side of history.”

Over the past several years—and especially since the start of the pandemic—Starbucks workers (identified by the company as “partners”) have faced unsustainable labour conditions including chronic understaffing, unpredictable hours and a lack of job security and transparency. In August 2021, staff at a location in Buffalo, New York, formed Starbucks Workers United (SWU) and filed a petition to unionise. Since then, 11 Starbucks locations in downstate New York have filed union petitions, with six victories, four pending elections and one challenge.

In retaliation to partners’ attempts to unionise, Starbucks has launched an aggressive union-busting campaign to discourage workers from participating by laying off staff, closing locations, reducing hours and spreading anti-union materials. The pushback from Starbucks and its refusal to sign SWU’s Fair Election Principles and concede not to intervene with the union campaign efforts appear to have served largely to galvanise partners, who continue to organise nationwide. To date, over 115 locations have voted to unionise, and more than 275 petitions have been filed across the country.

While Starbucks’s partners have been immensely successful in their efforts to unionise, they allege that persistent scare tactics employed by the company are a hindrance to the progressive movement to ensure that workers in non-traditionally unionised industries can obtain job security and, by extension, perform better in their roles.

The gathering outside of MoMA—comprised of members of Starbucks Workers United and supported by union groups including Workers United NY/NJ, IATSE (the International Alliance of Theatrical Stage Employees) and Local 2110 of the United Auto Workers (UAW), which represents workers at dozens of nonprofits and art institutions—convened in an attempt to get their message to Hobson directly, in the hopes of stopping Starbucks’s union-busting efforts. “All we are asking her to do is agree to neutrality and non-interference in the union process,” a representative of Workers United told The Art Newspaper.

The unions allege that since she became chairwoman in March 2021, Hobson’s lack of leadership and support for Starbucks partners—who, according to Starbucks, are 71.3% female and 48.2% Black, Indigenous and people of colour (Bipoc)—suggests she is complicit with the company’s union-busting tactics, a stance that is at odds with her reputation as a philanthropist. Among her numerous positions, Hobson is a board member of the George Lucas Education Foundation and Bloomberg Philanthropies and is on the board of trustees of the Los Angeles County Museum of Art, the Rockefeller Foundation and the Center for Strategic & International Studies. As one organiser in attendance at the protest asked, “how can you be awarded as a philanthropist when you’re not allowing workers to make a living wage and support themselves?”

Maida Rosenstein, president of UAW Local 2110—which represents around 250 workers across several departments at MoMA—attended the protest to show support for Starbucks workers. “It’s a great time to be involved in the labour movement, with so many young workers organising,” she said. “Unionising is the only way for workers to have a democratic voice in the workplace. It enables them to safeguard and better their workplace conditions. It’s the only thing that will give workers any power or leverage to push for better conditions.”

A representative of Workers United explained that the Starbucks union efforts are so pivotal in large part because the campaign is driven by the workers, and Starbucks partners are involved in all of the meetings and decisions regarding the campaign. Partner involvement and power-sharing are central tenets of the organisers, who assert that unionising is the best way for workers to “contribute meaningfully to the partnership” and collaborate to improve the company while maintaining stable careers.

Rosenstein added that the Starbucks union movement is significant because it is composed of young, primarily minimum-wage workers in an industry that has largely not been organised. She likens the movement with that of museum workers, who are similarly paid low wages and often have to negotiate precarious, part-time positions.

“Right now, there is tremendous, systemic wage inequality, housing is extremely expensive, and college-educated people are coming out of school with a lot of debt while also seeing wealthy people becoming even wealthier. During the pandemic, this wealth inequality became even more clear, with mass layoffs and furloughs,” said Rosenstein, who believes the labour movement will continue to grow.

CJ Toothman, a 26-year-old organiser and barista at the Starbucks Reserve location in Williamsburg, Brooklyn, which will vote on unionising next week, said, “there’s definitely momentum throughout New York City and across the country”. Hailing from West Virginia, Toothman grew up going to picket lines with her father, a coal miner, and mother, a postal union worker. “I believe this is the future of union organising and American labor,” she said. “This is some of the strongest union activity the country has seen since the 1920s and 30s.”

Since starting to work for Starbucks in October of last year, Toothman has seen the consequences of being short-staffed, explaining that several new workers have quit because they were not offered supervision. “I work overtime pretty much every week, and despite that, I still struggle to make rent,” she said.

Toothman added that at her Starbucks location, the company’s anti-union campaign is inescapable. “We have seen animosity towards workers that sign the letter saying that they want a union. We’ve all had to sit through one-on-one discussions with our district manager and have been forced to read through anti-union materials.”

Addressing Starbucks leadership, she said, “We show up every day to work for you; you need to show up and work with us.”

As the protest outside the MoMA gala wound down, Hobson had still not been seen entering or leaving the museum via the 53rd Street entrance, having presumably used a different entryway. Organisers were nevertheless in high spirits, having come together to spread their message.

Representatives for the museum did not respond to requests for comment.