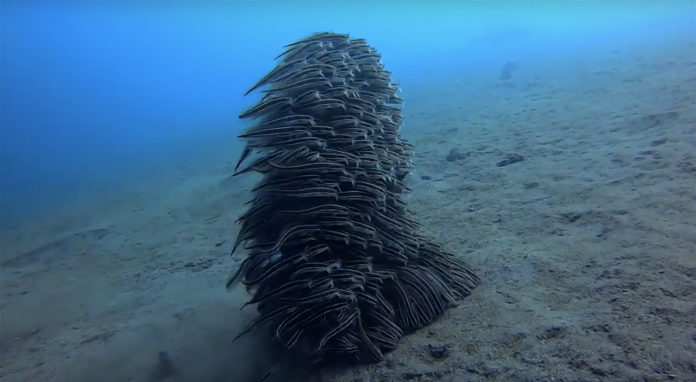 For young striped eel catfish, there really is safety in numbers. A recent Instagram post shares a video by Marie-Laure Vergne of about one hundred juvenile fish moving across the bottom of the ocean. The Abyss Dive Center, a scuba diving school located in Amed, Bali, explains in the post that until the fish are fully grown and gain all of their deadly capabilities, they protect themselves by swimming in dense groups. Similar to other catfish, this species has four pairs of barbels on the upper and lower jaws. In their pectoral and first dorsal fins, though, the fish have a highly venomous, and sometimes fatal, spine.

As suggested by The Kids Should See This, the aquatic animals appear to take turns as they move, diving toward the bottom before appearing back at the top only to repeat the cycle. If you focus on one of the fish’s movements, you’ll spot the undulating pattern. The dive center does have a cautionary tip for anyone who encounters the phenomenon: “The young ones can only produce a mild version of the venom, tingling the fingers of the people putting their hands in the school (which we don’t recommend you do! ).”