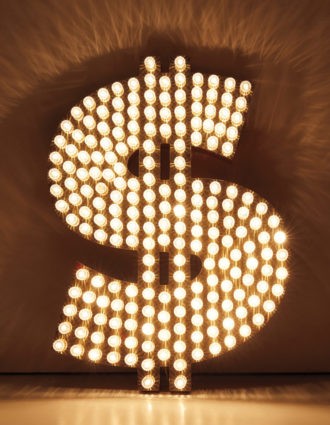 Although one commentator, Colin Gleadell, focused on the several guarantees offered at Phillips for their London sale, the truth of the matter was that there wasn’t much to talk about good or bad. That’s not a slam on Phillips. Of the 28 art works offered, 24 sold. Many of the works that sold showed that the market is mostly at a level where prices are neither advancing or retreating.

If you follow Damien Hirst’s market, you’re probably pleased to read that an early spot painting that passed through the Mugrabi family’s hands, according to Gleadell, and Phillips’s sale room was able to triple in nominal value over an eleven year period. A February 2004 sale at Christie’s netted £139k. Nine years later, the Mugrabis bought the picture at Phillips for £361k. Last night it made £509k.

A better return, even with the falling pound, came to the seller of a small Richter abstract that reminded observers that the market for these works had moved into the lower ranges even as the auction houses are gathering large canvases for New York’s upcoming sales. Here’s Tully:

Gleadell left us with these reminders that trying to pick the next artist to pop in a flat market is not easy business:

The only guarantee completely backed by Phillips was the opening lot, Thomas Schutte’s yellow PVC sculpture, Little Spirit, which had been acquired at Christie’s two years ago on the top estimate for £128,500. Now guaranteed to just about equal that amount with a £120,000 low estimate it sold for £125,000 ($158,750).

Of course, there’s also the important reminder that a once sought after object can become less so. Though in this final case, it is probably not such a bad sign that the work was able to transact, as several others have over the years, even if it sold for a substantially lower price than was once paid:

Another bright British star of yesteryear, the Tim Noble and Sue Webster duo, also witnessed more restrained enthusiasm as a lightbulb $ sign, such as one that sold for £240,500 in 2007, came back after having been unsold in New York in February to sell for £87,500.