Home News Supermodel Heidi Klum Has Always Been an Artist. Now, She Tells Us... 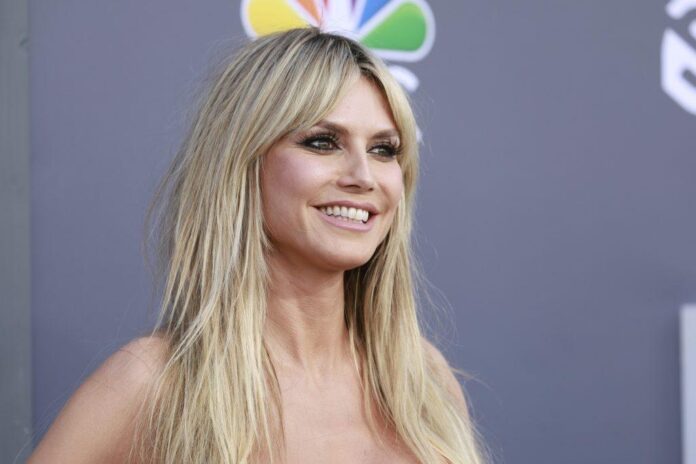 For Heidi Klum, before there was fashion, there was art—and it’s never been a secret.

The German American supermodel, perhaps best known for her 13-year stint as a Victoria’s Secret Angel and 16 years hosting , has always turned to painting as part of her life.

In 2002, she was one of 100 artists who painted sculptures for a public art project paying tribute to search-and-rescue dogs who served during 9/11. In 2016, she auctioned off a painted Roche Bobois desk to support UNICEF during Art Basel Miami Beach. And during lockdown, Klum shared her exploits in the studio in numerous posts on social media.

Most recently, Klum unveiled one of her paintings of a Bored Ape Yacht Club NFT on a digital billboard in Times Square as part of Apefest in June. She’s planning an upcoming drop of 10 NFTs, all based on the popular collection. 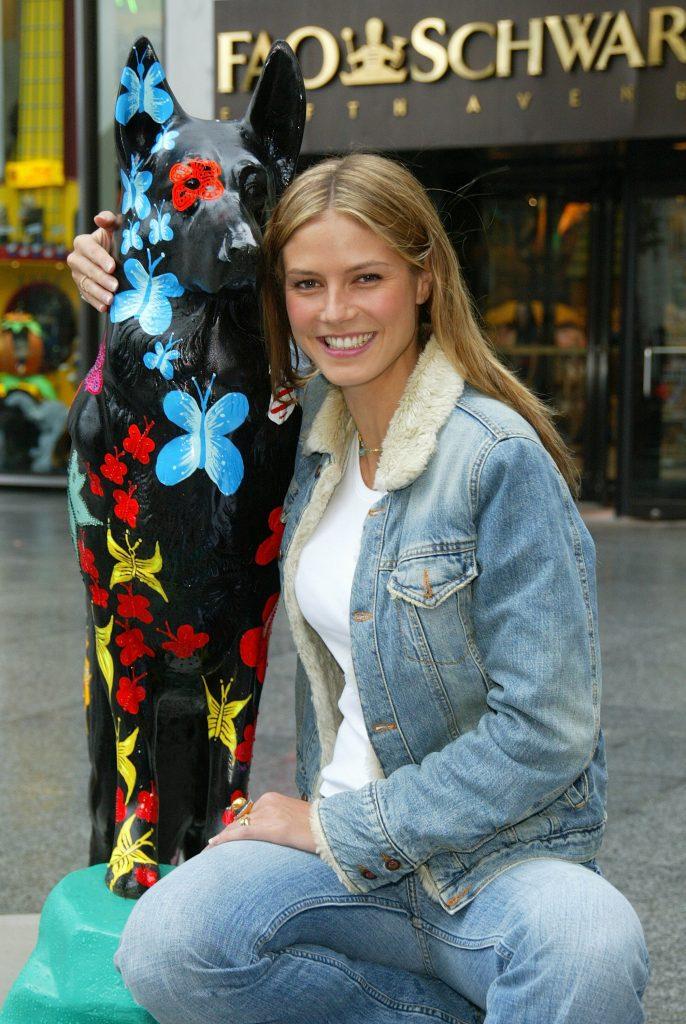 Heidi Klum poses at the installation of her painted sculpture September 27, 2002 in New York City. Photo by Matthew Peyton/Getty Images.

(As with many celebrities, Klum’s ties to the space are somewhat complicated by business relationships. Her wallet transactions show that her first NFT was purchased at cost from an investor—who also paid to register her wallet—in the company who made her second NFT, as reported by Dirty Bubble Media.)

Thankfully, Klum was happy to bring us into the loop in a wide-ranging phone interview about art, critiquing, collecting, and more, although she declined to discuss her romantic relationship with Vito Schnabel. 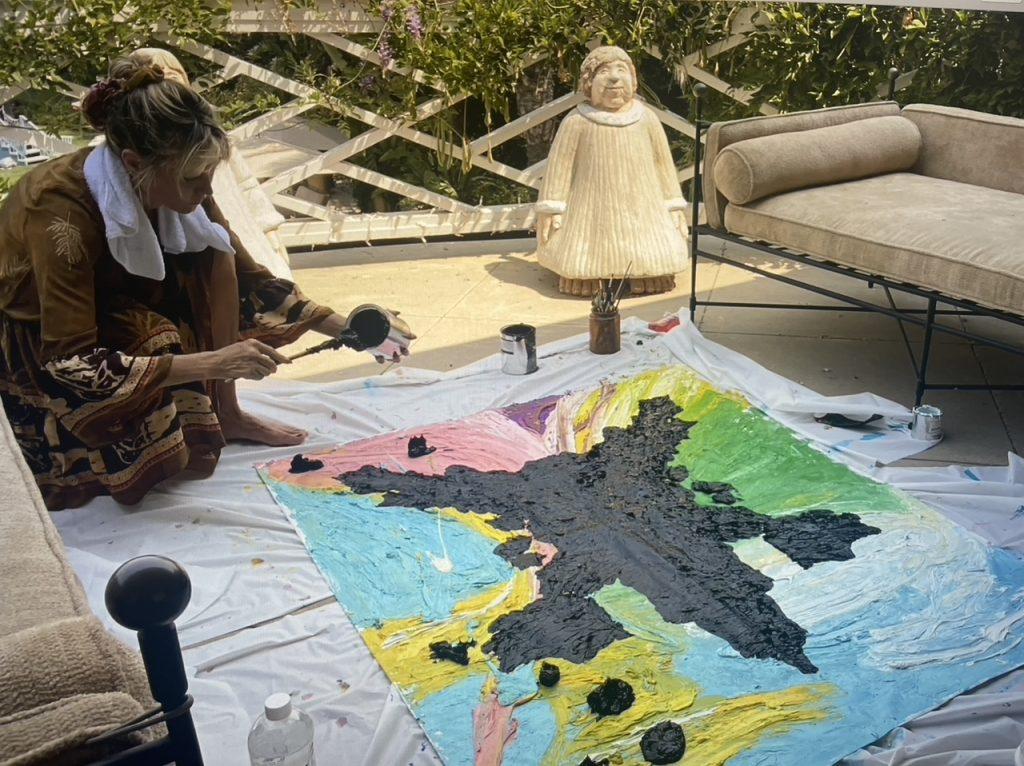 What is your earliest memory of making art?

Just drawing and painting as a kid. We didn’t always have the money for everything and anything, so we were a very creative household. My mom was always quick with the sewing machine, making something for me, and then also something matching for my Barbie.

Did you have any formal training in painting?

Art was one of my majors in Bergisch Gladbach, a small town outside Cologne. When I first went to New York in 1994, I took oil-painting classes with Wade Schuman on the weekends.

I danced for 15 years before I started modeling. My poor parents had to bring me to dance three, four times a week, and my team went to national competitions. So I always was into expressing myself in many different fields.

Because of life and work and traveling for modeling and later having children, there was less and less time for painting. But I never really stopped. And when the pandemic happened, I did more paintings.

The fun thing was that we did one big painting together as a family when we were all stuck at our house. For about six months, everyone was always painting as they felt like it.

Where do you paint at home?

I have an outside studio. It’s up on the bedroom patio. Everything I paint is with oil. I have two gigantic easels there, cans of paint, my brushes, and more canvases. I also have two couches there so people can lounge around and watch me paint. It’s a beautiful, big, outside space.

And how often are you in the studio?

Sometimes I do three or four paintings, and then I won’t paint anything for the longest time. I just did 10 paintings for my NFT project and they’re quite big. 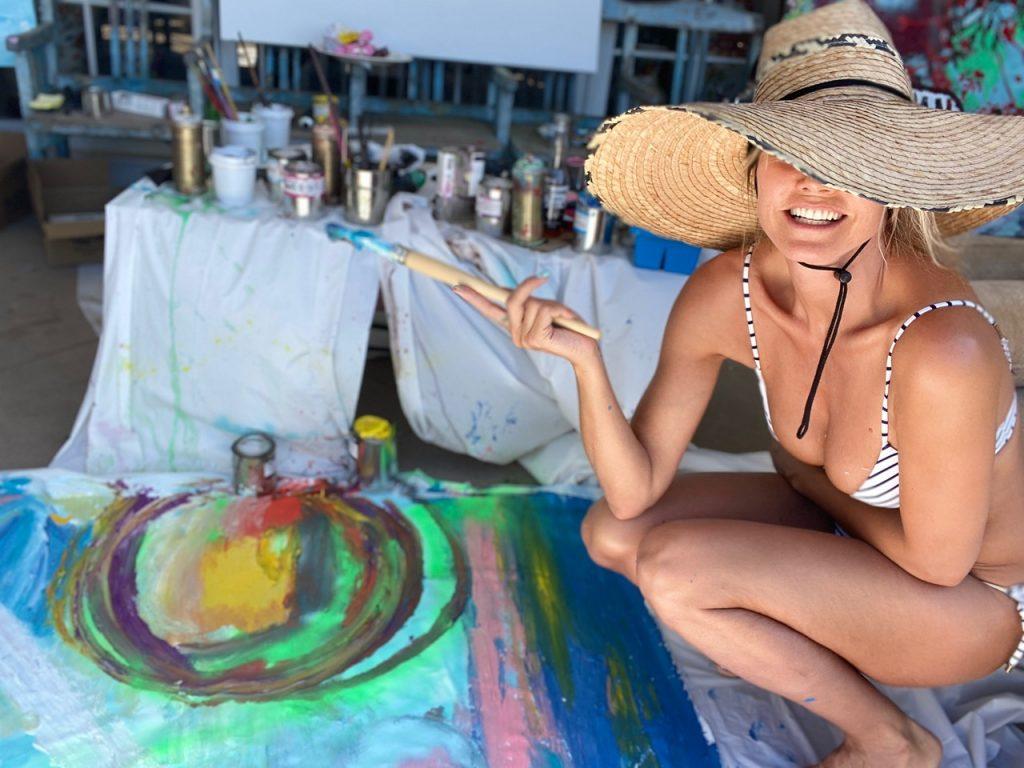 How would you describe your taste in art?

My style in general is very eclectic. Our house, it’s kind of like the Pippi Longstocking Villa Villekulla. It’s very vibrant. I love raw energy. I have butterfly wallpaper. We have a gigantic blue snail in the backyard. Even my kids sometimes say, “this doesn’t go together.” But for me, what doesn’t go together goes together even more.

I usually prefer paintings over photography. But I became friends with the photographer Adam Fuss like a hundred years ago when I was in New York. I always loved his photos. He took these life-size photographs of me, kind of silhouettes, of my pregnancies. 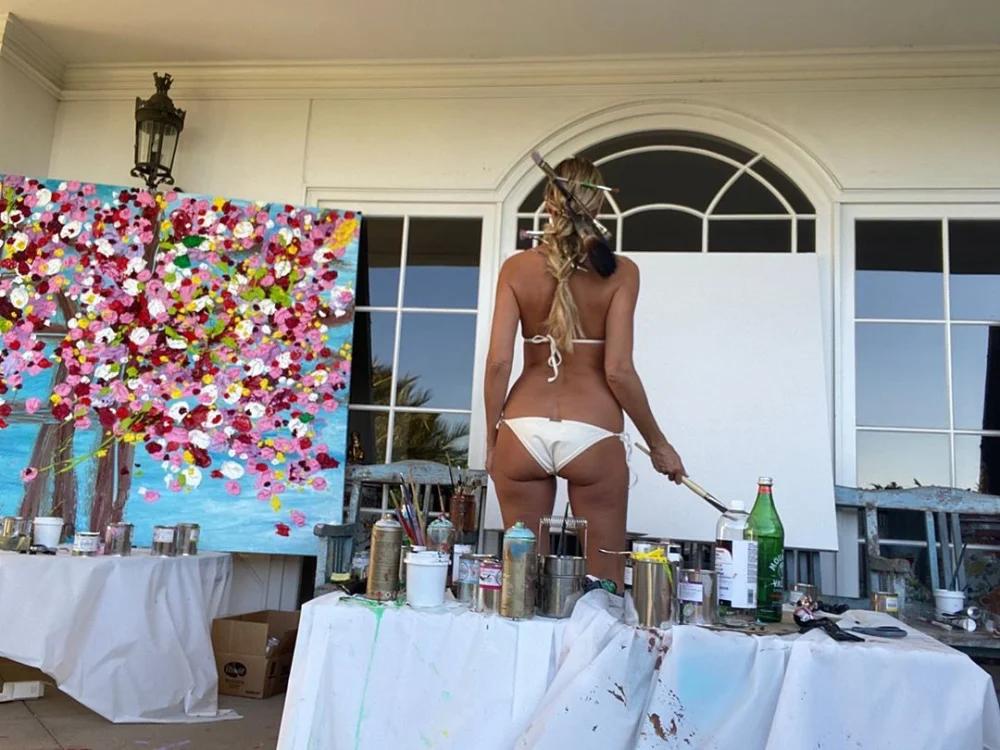 Is there a favorite piece you own?

My most valuable possessions are probably my kids’ art. I have one gigantic staircase that has 50 paintings that my kids have done. But one would also be the first rose painting Julian Schnabel ever did, one of his plate paintings. It was a consignment, and I gave him the idea to do one with roses. When you actually ask someone to paint something for you, and then they do another series of like 12 of them—it’s one of my proudest moments. He is one of the greatest painters of our time, and I respect and love him so much. 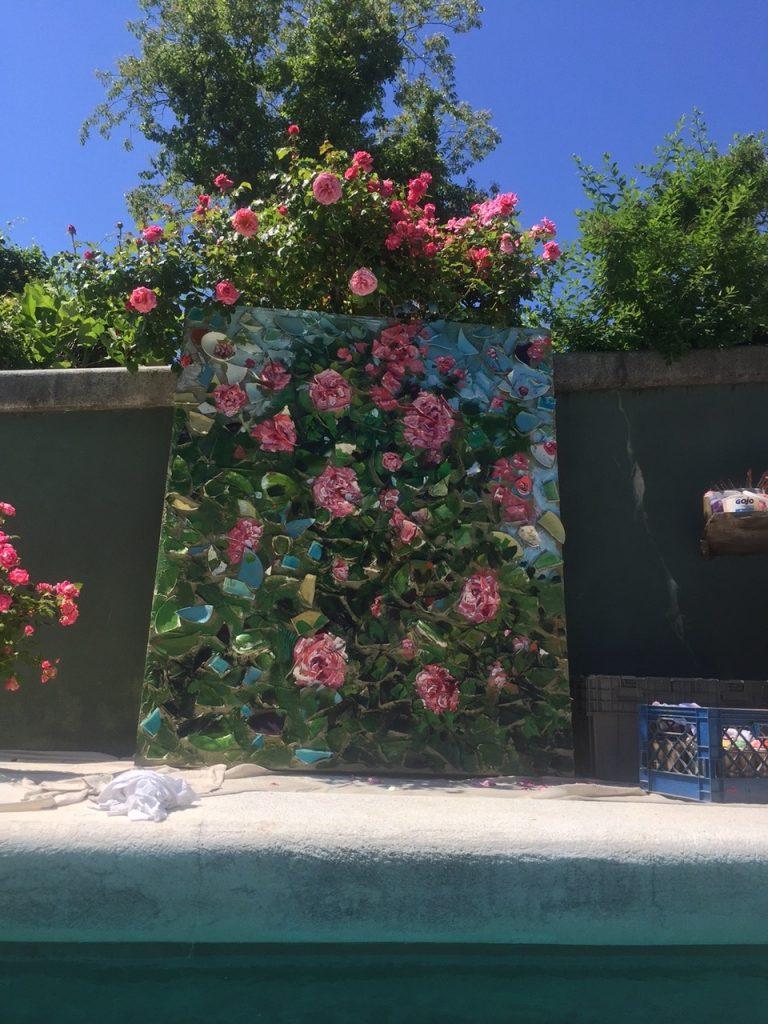 Do you see art and beauty as a through line in your life connecting the art studio and in the fashion industry?

Yes and no. In making clothes, there’s a lot of different steps that you don’t have when you are painting or making a sculpture. I feel like with art, the sky’s the limit. You don’t have always someone behind you and saying, “this is gonna be too expensive” or, “how do we manufacture that?”

From your days on , you obviously know the importance of critique. Do you ever get feedback on your paintings, and has that even been a difficult experience?

I have never really gotten that much feedback, to be honest with you, because I don’t think I’ve ever really put myself out there too far. But I think getting a reaction is half the fun in a way—I’m also not afraid of it. I’m a big girl.

Launching these NFT paintings is really the first time putting myself out there. Being on a Times Square billboard with one of my paintings was probably one of my most proudest moments. Normally I hang there with my face on it, so it was different! 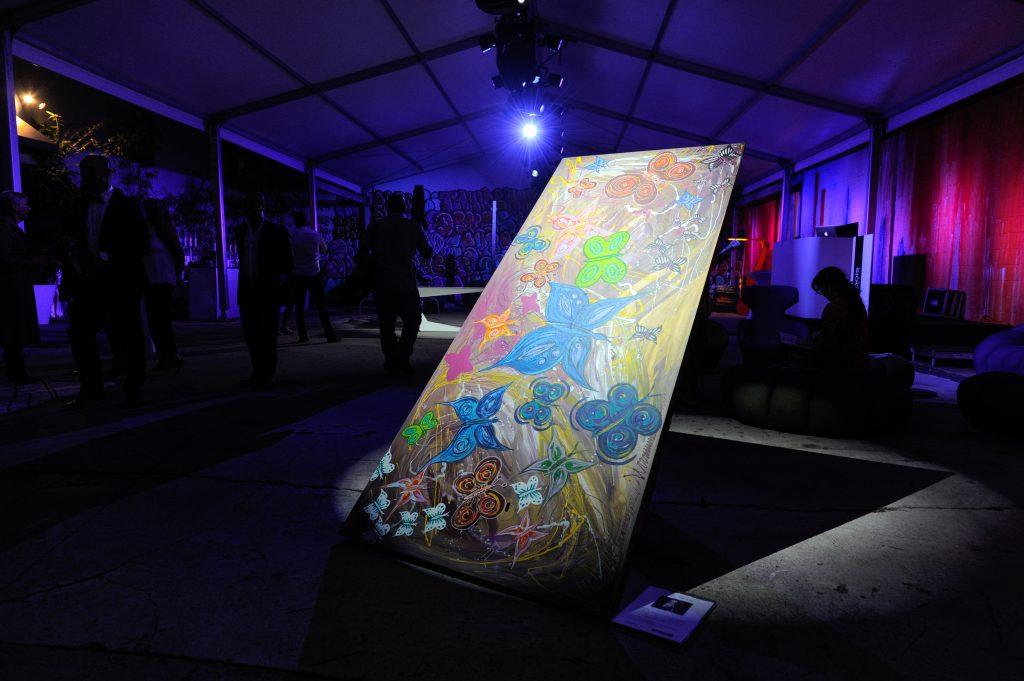 What inspired this new NFT project? Do you collect them?

I only have two NFTs, which I display on screens in my home. The first one is my Cryptopunk, which kind of looks like me. And my second one is a Utopian for Afterparty, which is this community that does special events. They have a house in Los Angeles where influencers come—it’s kind of what the young people are doing. I was very interested to see what this was all about.

The NFT art world is wild. You don’t know what art I have hanging in my house. But with NFTs, because of your wallet, people can see what you have. I think that’s why a lot of people enjoy it. And it’s kind of like a new way to play the stock market. You can lose a lot. You can win a lot. It’s a way for people to get bragging rights—not that I do it for bragging rights!

When I was looking around at all these different people doing NFTs, I thought, “What would my NFT be?” Most people have artists create their NFTs for them. But I wanted to create my own, because I love doing painting. So my idea was to paint on 10 of the most important NFTs out there, which next to the Cryptopunks, are the Board Apes.

I think I got kind of the idea subconsciously, because I had asked Richard Prince to make a painting of me a long time ago, using one of my favorite pictures of me, shot by Rankin. That’s kind of what I wanted to do. 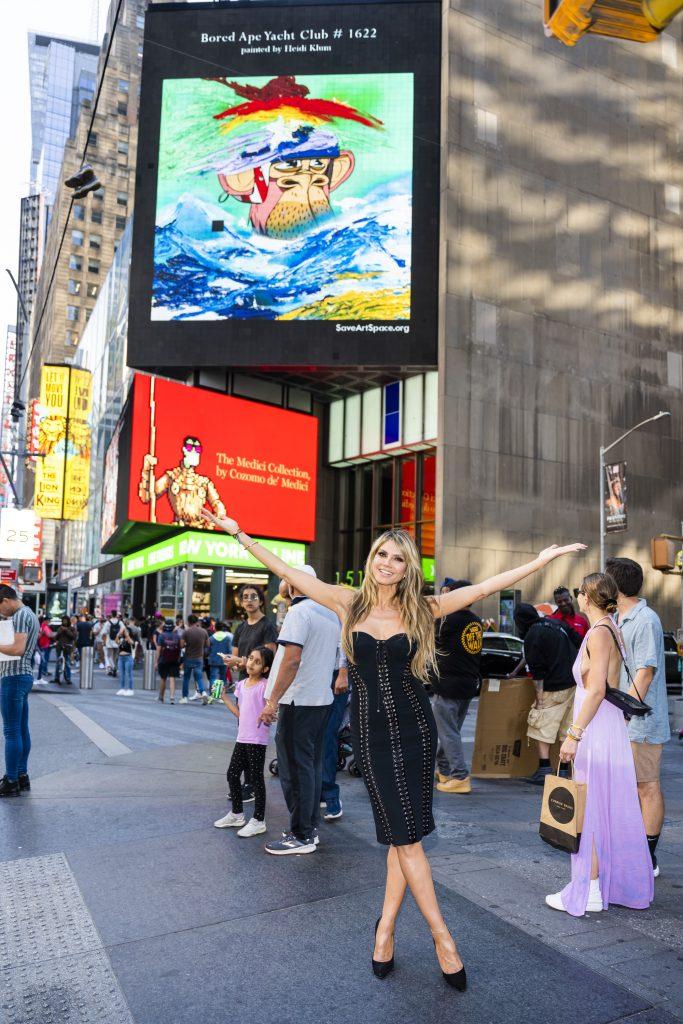 Heidi Klum attends Apefest during NFT NYC in Times Square on June 24, 2022 in New York City, with her new NFT art based on the Bored Ape Yacht Club displayed on a digital billboard. Photo by Gotham/GC Images.

How did you chose which apes to depict?

I found someone who owns many of them and was willing to let me paint on them. I don’t wanna say who it is, because they’re a private person. [Based on OpenSea records for Ape #1622, the first work depicted in Klum’s series, the owner is NFT collector j1mmy_vault.]

I printed them out all out, five by five, on canvas and had them stretched. I went into a studio downtown, a gigantic warehouse, had them all hung from the ceiling. And then I just gave myself 12 hours to paint all of them, which was crazy, but so much fun at the same time.

That just happened because Cozomo de’ Medici stumbled across them—in the NFT world, word goes around. He believed in my project and showcased it during Ape Fest. 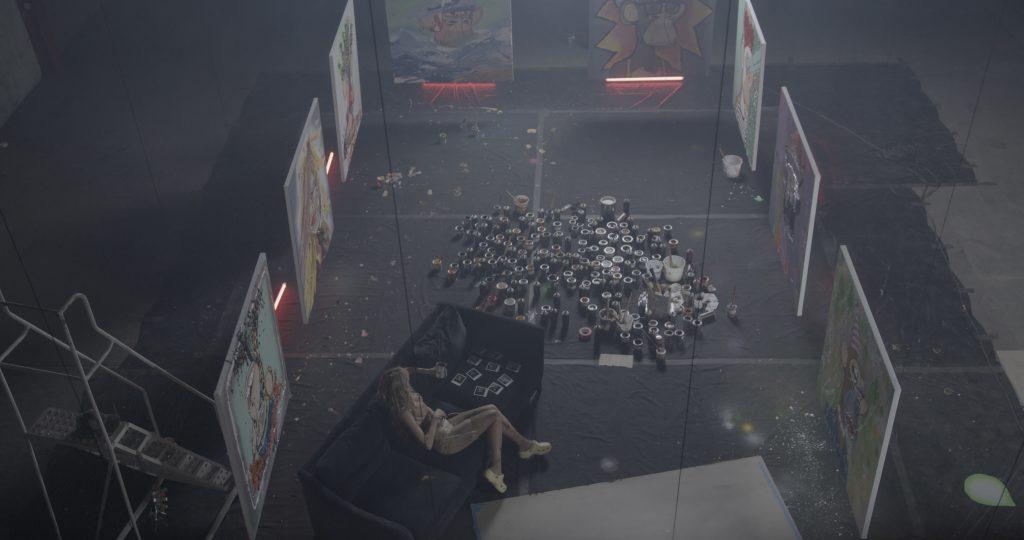 Heidi Klum with her NFT paintings based on the Bored Ape Yacht Club. Photo courtesy of Heidi Klum.

Is there any truth to the rumor that Cozomo de’ Medici is Snoop Dogg?

Outside of NFTs, what was an artwork or exhibition that you saw recently that you really loved?

I’m friends with Lola Montes Schnabel, and her show was probably the last one I saw, at Nino Meir Gallery here in West Hollywood [through August 27]. I have many things from her. Right now, she’s experimenting with painting on tiles, but also she’s done beautiful sculptures for that show. 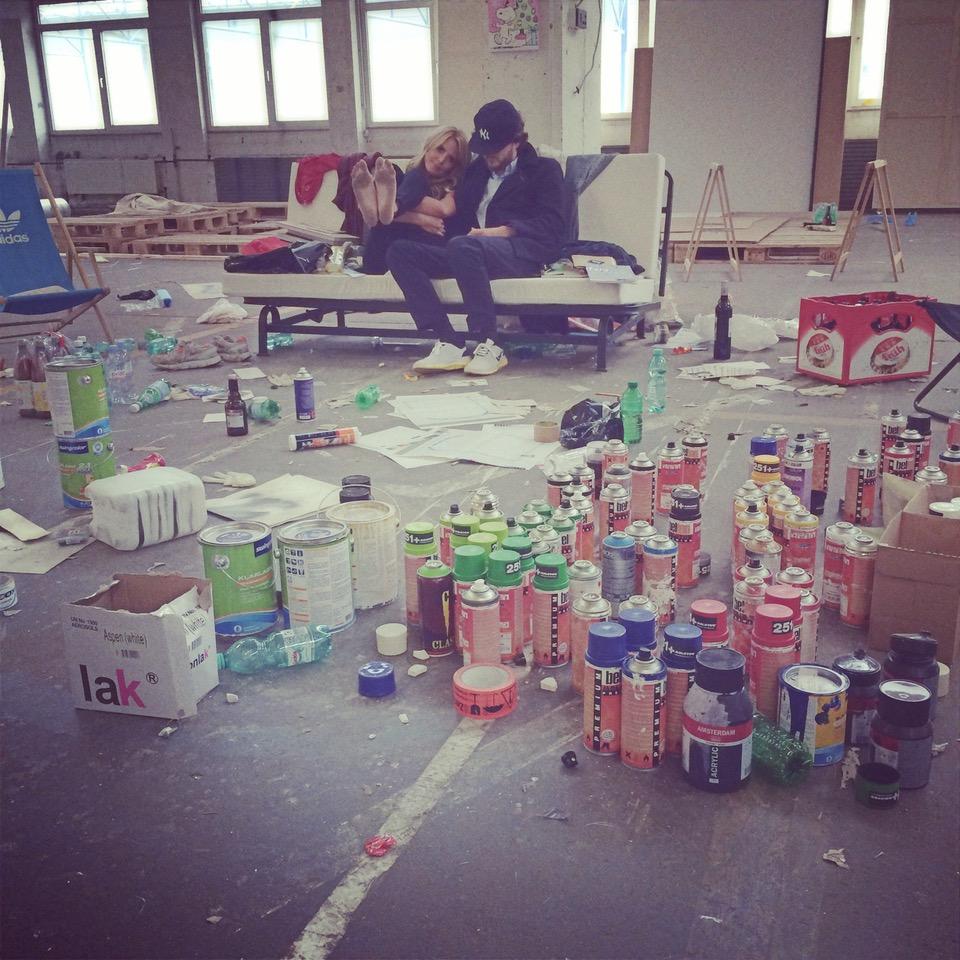 What other contemporary artists do you admire?

One of the first was David Ostrowski from Germany. Jeff Elrod I love, and we’re friends and have been to Marfa many times. Dan Colen, Ron Gorchov, Sterling Ruby, Rashid Johnson, Bruce High Quality Foundation, Rene Ricard, if that gives you an idea.

When do you plan to debut the full NFT series?

As you know, the whole market has crashed. It’s probably better to buy now than to drop. This is the worst time to drop anything. But it will be soon. For me, it was more the passion of making it—the same way that I love being an art piece myself once a year, when I do Halloween.

The makeup and costumes involved are definitely an art form unto themselves. What inspired you to start hosting these parties?

My love for Halloween and transforming comes from Germany. In Cologne, we have a big carnival, kind of the unsexy version of what they do in Brazil. We have different kind of costumes. It’s more silly, and also more political.

Now, I sit through 15 hours of having prosthetics glued on me, purely for the reaction I get from people—and then it takes another like three, four hours to get it off.

I feel like I’m the canvas, and I love showcasing these people’s art. And they love doing this on me. They’re like, “No actress wants to sit through 15 hours of this. You’re the only one. We love you, because we can really go for it.”

I really rack my brain every year to not let any of the Halloween fans down. This year, for example, will be my best Halloween costume ever. It’s thrilling for me.

Four years ago, I was in the window on a street in Manhattan all day, getting my make-up done. People could come from morning to night, and see me getting ready. I was kind of like a little art installation.

And what about plans for an art show of your own work?

Yes. I think I will do that. I wanna show the 10 NFT paintings in one room.