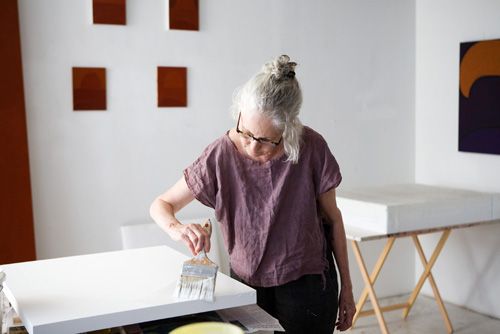 At 75 years old, Suzan Frecon continues to impress the art world. She is the latest recipient of the $25,000 Artists’ Legacy Foundation artist award.

“The recognition of your peers is so important,” she said in a statement. “If your peers respect your work that is really wonderful.”

In 2000, painter Squeak Carnwath, sculptor Viola Frey, and community advocate Gary Knecht created the foundation to encourage artists to consider their legacies and support other artists in the process. Frecon is the sixth woman to win the award.

She joins the center stage of artists such as John Outterbridge (2010), noted for his convergence of assemblage, folk art, African sculpture, and community activism; Los Angeles painter Mary Weatherford (2014), acclaimed for her emotionally charged and atmospheric flashe on linen works that incorporate neon lighting tubes, and Chicago artist Jim Nutt (2015),  known for his grotesque and surreal portraits. Suzan Frecon Book of Paint, 2015. Courtesy of the artist and David Zwirner.

Frecon was born in a small town in Pennsylvania called Mexico, and obtained a degree in fine arts at Pennsylvania State University in 1963.

For the past four decades, the artist has been known for her exploration of abstract oil and watercolor paintings. Using the pigments that she grinds herself, she focuses her attention on color composition and form, with large shapes filling her canvases.

Her work has been included in the 2000 and 2010 Whitney Biennials, and she has been exhibited in the United States and internationally. The artist is represented by Lawrence Markey Gallery in San Antonio, Texas, and David Zwirner Gallery in New York.