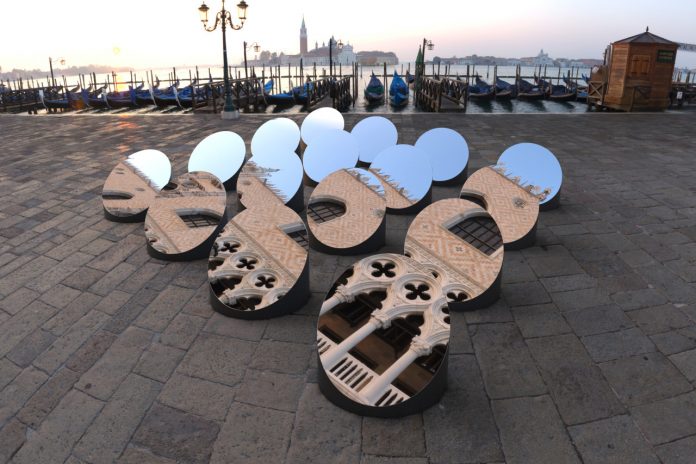 AZIMUT, an installation by French artist and designer Arnaud Lapierre, offers a prismatic look at some of Venice’s historic structures. Situated along the waterfront of Riva degli Schiavoni, 16 titled mirrors with battery-powered motors rest on the cobblestone walkway in front of the Palazzo Ducale, a gothic landmark that dates back to the 14th century and currently houses one of the Italian city’s museums. The reflective circles spin in tandem, offering a magnified view of the palace’s patterned stone and the intricate details on its facade.

When facing the water, the mirrors even pick up glimpses of the San Giorgio Maggiore, a Benedictine church that was completed in the 16th century. Featuring massive marble columns, the basicillica was designed by Renaissance architect Andrea Palladio.

Lapierre described the project as “a loss of balance, of recomposing landscape and a patchwork observation,” of the surrounding architecture and historic city. For more of his designs that question and alter perspectives, head to Instagram and Vimeo. (via designboom)