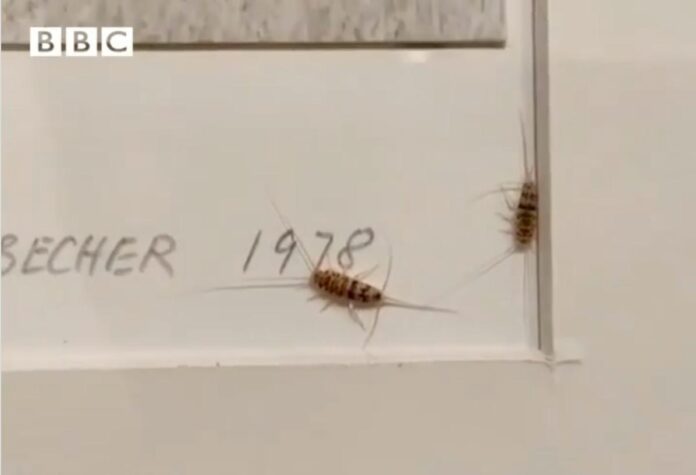 The Tehran Museum of Contemporary Art (TMoCA) has closed for fumigation after a viral online video showed insects inside the frame of an artwork. The museum will be shut from 18-19 August, according to a message posted on the museum’s Instagram account.

The Instagram video by BBC Persia—viewed over a million times via Instagram and attracted over 1,300 comments—shows two silverfish wiggling around underneath the glazing in the bottom corner of the mounting board in a work by the influential, 20th-century German photographers Bernd and Hilla Becher. The sighting raised concerns for the conservation status of works in the museum: Silverfish are attracted to moisture and like to consume paper, often damaging books and documents. The damage they leave has a distinctive fjord-like pattern where they have eaten away the paper.

The work in question is one of the Bechers’ signature Typologies, which show groups of photographs of industrial architecture. It is being shown in a display of the Bechers’ work as part of the museum’s current exhibition, Minimalism and Conceptual Art in the Mid-20th Century (until 18 September).

TMoCA was established in 1977 by the wife of the last Shah of Iran, Farah Pahlavi. Its collection of over 3,000 works is considered one of the largest and most valuble collections of 19th- and 20th-century Western art to be held outside Europe and North America—including pieces by Pierre-Auguste Renoir, Paul Gauguin, Andy Warhol and Francis Bacon, among many others.

The museum’s director, Ebadorreza Eslami-Kulai, told to the Iranian news agency ISNA: “A field investigation has been done and an external expert will come to the museum for further investigation. There is no concern.” He continued: “These things can happen when the works are taken out of their packaging and brought to the galleries.” He denied any damage had been caused to the artwork.

Eslami-Kulai became the director of the museum earlier this year. His predecessor was fired after an artist accidently fell into an oil-filled installation by Japanese artist Noriyuki Haraguchi during a performance. The museum posted a statement on Instagram, saying that “during this event, part of the performer’s body hit the oil, causing some oil to spill, which is replaceable”.

The museum did not respond to a further request for comment.