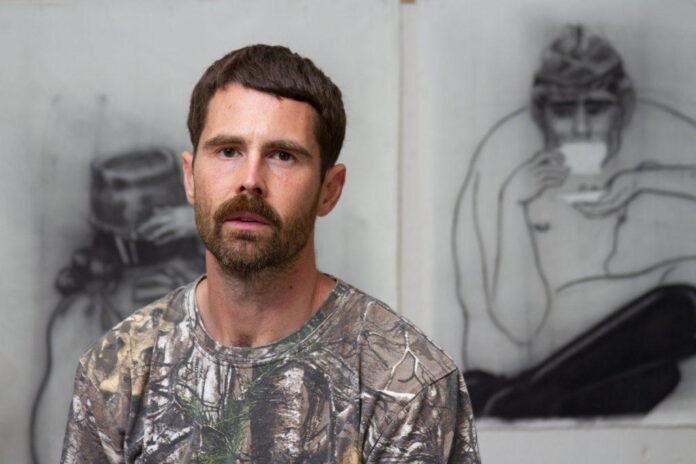 In March, the multimedia artist Jared Buckhiester was walking in Burberry’s fall show, looking rather sinister in a black leather union suit with a black leather jacket layered over it. He couldn’t believe he was modeling—and neither could the caterers, who kept informing him at the pre-show dinner that the buffet was only for models. Over the years his friend Riccardo Tisci, the British luxury brand’s chief creative officer, had occasionally pulled him back into his fashion orbit, commissioning his work for magazine collaborations or using his photos for store décor. But this runway foray was presaging a project they’d been intensely working on together—in some sense, for decades.

“Friends and Family” is a Tisci initiative in which he taps a trusted confidant to collaborate on the creative direction of a pre-season collection. “Jared and I have been close friends for a long time, and I have always admired him,” Tisci said in a statement, “as well as his commitment to living fiercely by his identity and being true to himself.” 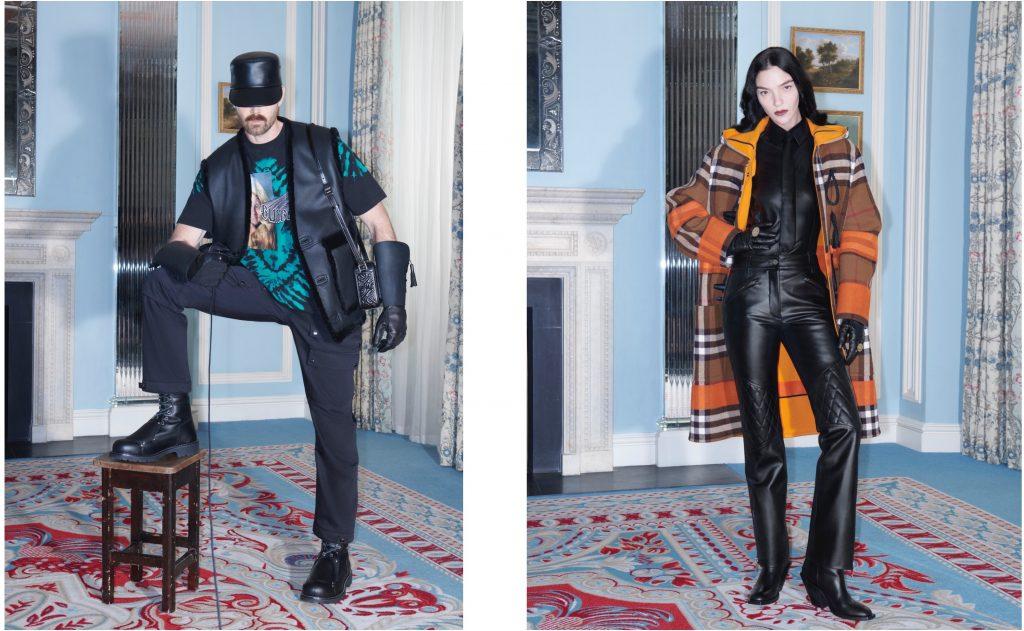 The latest “Friends and Family” collaboration, unveiled last month, centers on Burberry’s men’s and women’s spring-summer 2023 pre-collection, a curiously chic amalgam that incorporates nods to rave and biker culture. Leather was wielded liberally. There were restrained flourishes of safety orange and the brand’s obligatory tartan. It had all the hallmarks of Tisci: a sleek, sexy, streetwise take on modern luxury. The menswear balanced amped-up machismo with androgyne moments like kilts and denim maxiskirts. (Buckhiester’s work also often explores the extremes of masculinity, the macho vs. overtly fey juxtaposition). Buckhiester styled and photographed the digital lookbook starring the Italian top model Mariacarla Boscono, and makes a cameo too, his face obscured by a cap.

“That was the easiest part. I felt the most confident whenever I was behind the camera,” he said one day earlier this month. Buckhiester, who is 6’2″, was reclining in camouflage fatigues and a Michael Jordan T-Shirt on the stairs of a church in New York’s Nolita. He flipped through the lookbook images on his phone, pointing out allusions to Karlheinz Weinberger, Helmut Newton, and George Dureau. “My artwork is image-based and compositionally considered,” he noted. “For sculpture or drawings, I look at photography as reference.”

Some of the collection’s Southern gothic curveballs correspond to Buckhiester’s eccentric gaze. He is New York-based, but hails from Dahlonega, Georgia, and his origins are redolent in his oeuvre (and his retained accent). Leather accessories included a floor-length apron, women’s mud waders, and a falconer’s glove. Elsewhere were odes to the American workwear he is predisposed to, such as a welder’s hat and barn jacket.

“It felt so natural,” Buckhiester said of intertwining his work with Tisci’s. “If you look at the drawings I made last year, all of these references were in them.” A chain link that originated in Jared’s pencil works became a motif for a printed blouse and a white-on-white suit. “I really depended on Riccardo, ‘cause he’s known me for so long,” Buckhiester said. “He could see the things that were representative of me as an artist that also matched up with him as a designer, which would be the through-line that would really hold the collection together.”

The germination for this collaboration, which is much more personal than is already evident, actually began many years ago. It’s a story about friendship, creativity, and making art for art’s sake. 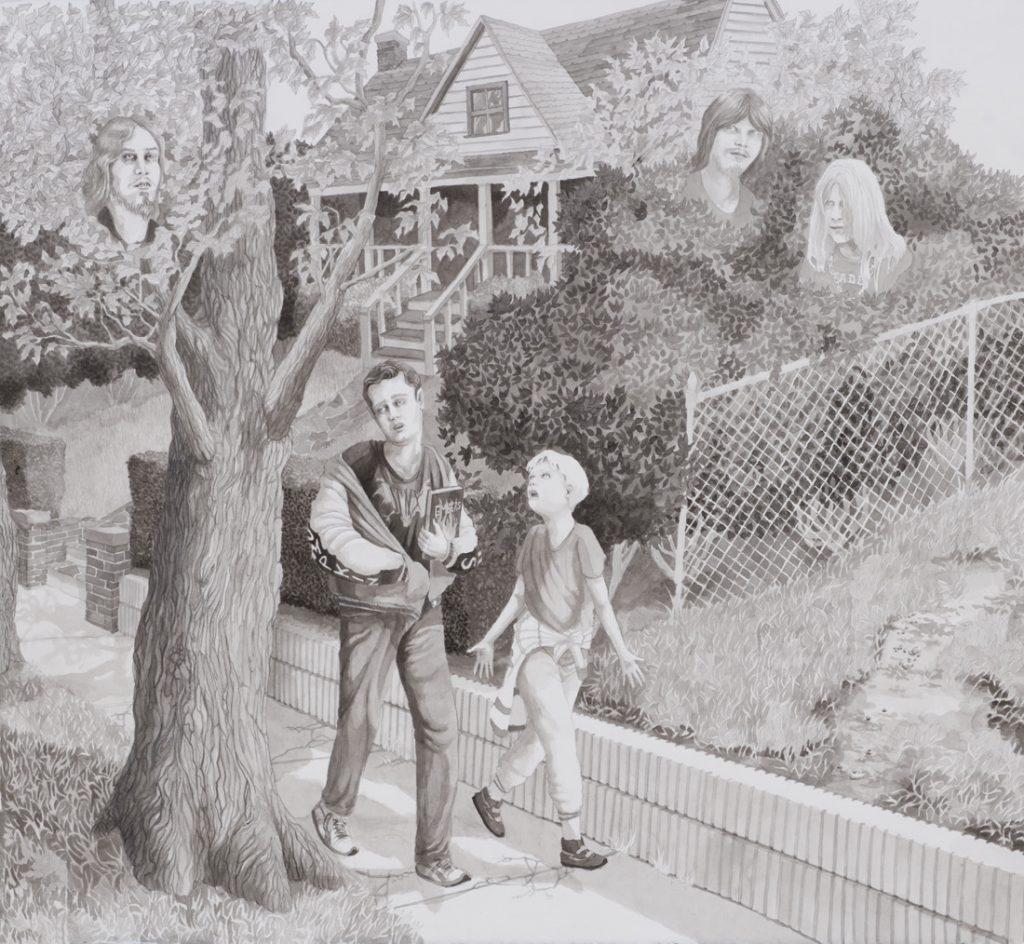 Jared Buckhiester, (2005). Courtesy of the artist.

Buckhiester started drawing as a child. “It was always the thing that I could do easily,” he says. “It’s a way that I process thinking and ideas. I think I’m compulsively narrative a lot of the time. The work I make is sort of fragments of bigger narratives.”

He moved to New York in 1995 to attend art school at Brooklyn’s Pratt Institute and majored in photography. “I stopped drawing because it was what was expected of me,” Buckhiester said. “I was a rebellious teenager and was like, ‘I’m only gonna do photography.’” He swiftly became immersed in the nightlife and rave scenes, and the focus of his photography became fashion. Fast forward to 1999, and Buckhiester was barely getting by as a freelance photographer. He shot for local indie publications such as an ahead-of-its-time magazine that combined fashion and hip-hop culture, but he mostly survived on model tests. A fresh face named Mariacarla Boscono came to town, and to her agency’s surprise and chagrin, she arrived bald.

“My career was absolutely not taking off,” said Boscono, recalling her defiant look. “Back then, the girls that were working were blonde and gorgeous with big boobs. I was really far away from that. I shaved my head every morning with a men’s razor.” It was evidently so off-putting that the photographer the agency had booked refused to shoot her. Buckhiester saw a fabulous alien gamine and readily agreed. He took her to lunch at McDonald’s and then to get massive fake fingernails applied, then photographed her in a corner barbershop near his Clinton Hill, Brooklyn, apartment. (These images have never been published; Buckhiester still has the negatives.) The two parted ways, but not long after, at the end of a very late night out, Buckhiester met an Italian shoe designer on the street who was due to return to home two days later—and moved with him to Italy.

In Milan, Buckhiester went to Boscono’s agency and left her a message with his number. She invited him over for dinner and they started hanging out and listening to techno. Jared picked up Italian swiftly (and bought a beat-up used Vespa) and paid the bills with off-the-books test shoots for the local agencies for about $200 a gig, which led to work for some independent Italian fashion magazines. “He was a proper photographer,” Boscono says of Buckhiester, “but also a DJ and party boy living the scene and living the life, like all of us. Back then, that’s what being an artist was. It wasn’t only being a model or doing clothes or music or pictures. It was living in a loft or a squat and going to this kind of party and listening to this kind of music. It was living like what you stand for.” 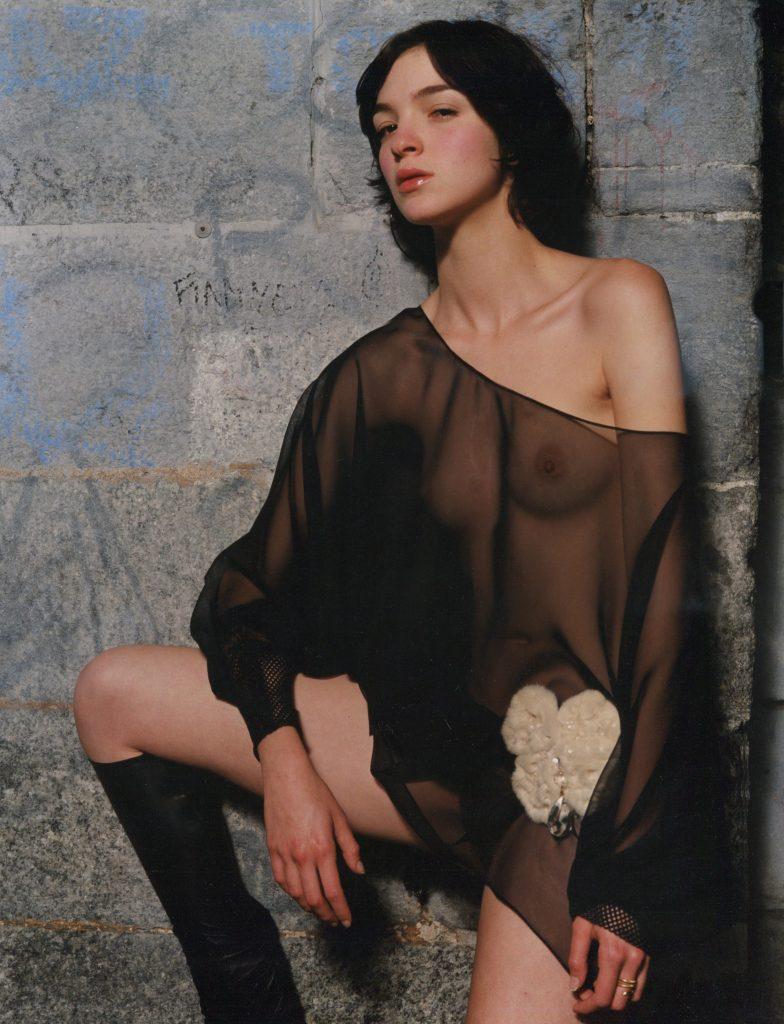 A summer 2000 image of Mariacarla Boscono, styled by Riccardo Tisci in his short-lived namesake brand. Photograph by Jared Buckhiester.

One night at Boscono’s house, Buckhiester met Riccardo Tisci, who had recently graduated from Central Saint Martins (Boscono walked in his student show) and was working on his own nascent brand. Buckhiester and Tisci had actually met in passing in London the year before at Kokon To Zai, a hip multi-brand fashion emporium and hangout (the store sold Tisci’s graduate collection). The three found commonalities in going out dancing, but also a shared fondness for image research at libraries (Boscono and Buckhiester are both still devoted to library jaunts to add photocopies to their stockpiles). “Our friendship was never like, ‘Let’s go for a burger,’” Boscono explained. “Jared talks about art, Riccardo about music. I talk about travel. We were exchanging info. The last thing we’d talk about was fashion.”

The three had creative synergy, differing skill sets, talent, and time on their hands. “Riccardo was really enthusiastic about making things together,” Buckhiester said. “He was the catalyst in getting us to produce images and bringing in ideas.” Over the months, the trio set out on a series of commando-style shoots, lugging gear and clothes, mostly Tisci’s designs. Buckhiester remembers Boscono nude except for a trench. “It was completely self-directed,” Buckhiester recalled. “We were staying up until 4 o’clock in the morning, shooting at Parco Sempione by the castle—just me and an umbrella light and Ricardo putting the things that he made on Mariacarla.” Boscono added: “Nothing  had a purpose but to just create art. It wasn’t about let’s make money, let’s be famous. Everything was, ‘We gotta do this because we have the urge to do this.’ This strikes me every time I think about it.” She continues, “We were like the queen and kings of everything, and nobody was watching. We didn’t care. We just went for it.”

The halcyon summer had to end. Riccardo Tisci showed his namesake collection for two seasons at Milan Fashion Week before he was tapped to take over Givenchy in 2005 (he joined Burberry in 2018). Mariacarla has been in the top echelon of modeling ever since. But while his collaborators were reaching the stratosphere of fashion, Buckhiester was on the verge of retiring from it. 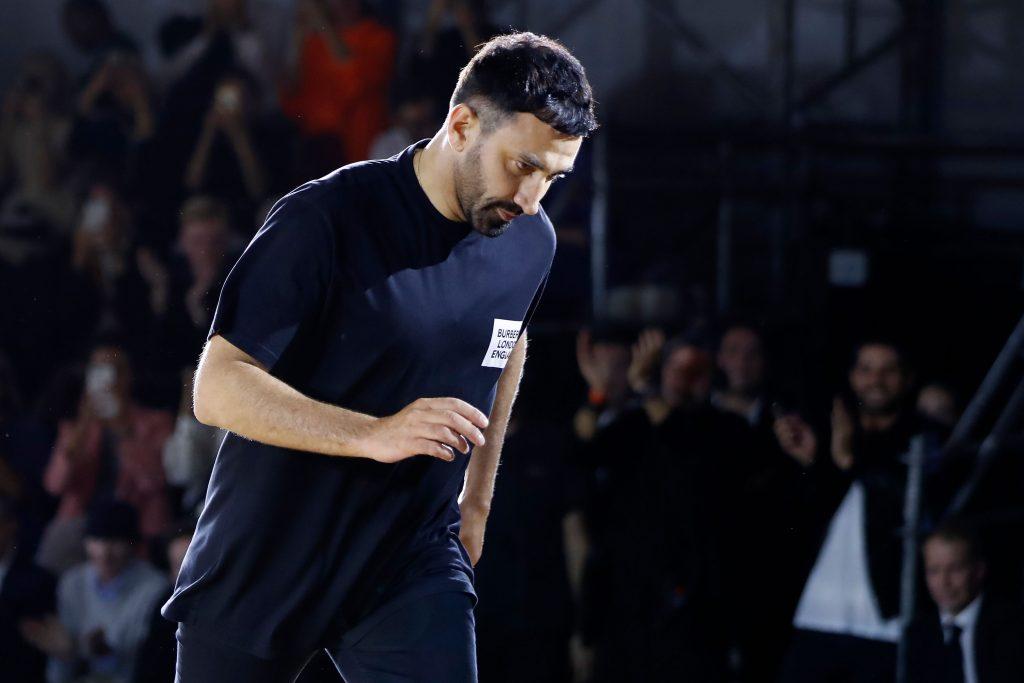 He split with his boyfriend and moved back to New York, assisting at Milk Studios and for other photographers. He continued shooting for niche publications, but after the exhilarating, heartfelt work with Tisci and Boscono, the shoots were unfulfilling. “I was in my early 20s and I realized I wasn’t making things that were representative of what I wanted to make,” Buckhiester said. “After shoots I wouldn’t have any emotional connection to them.” After a five-year pause, Buckhiester resumed drawing. “It felt right,” he said. “People were really responding to them, and then I started showing and selling them.”

He has focused on art ever since, graduating from Bard College’s MFA program in 2012, and has shown his drawings, sculptures, and films in various solo and group shows. His photography developed more of a reportage slant, and he has an ongoing series documenting truck drivers he passes on the highway. Critic and curator Hilton Als tapped him to work on the installation of three of his exhibitions and collects his work. “He doesn’t repeat himself, which makes him difficult to categorize from a commercial point of view,” says Als. “In a world where ‘sticking to what you know works’ generally works, Jared relies on his own unfettered and uncommodifiable imagination.”

Two years ago, Buckhiester decamped to the Massachusetts village of Great Barrington and developed a new body of drawings and sculpture. (He currently has a ceramic piece in the “Jung Lovers” group show at Soloway Gallery in Williamsburg, Brooklyn; earlier this month he moved back to the city and leased a West Village workspace and has been conducting studio visits.) When Tisci approached him in January to come to London for the Burberry project, it was a welcome respite from his bucolic isolation. And, just as he reconnected with his affinity for drawing, Buckhiester realized, begrudgingly, that fashion was still in his blood.

“I’m not a fashion photographer anymore. It’s not what I do,” he said. “But being asked to reengage in this way with Riccardo made sense, to set up the dynamic that we had originally.” Boscono doesn’t see the project as a reunion. “We might not have been taking pictures or making fashion,” she said, “but we’ve always been there for each other.” Now their bond has again been translated into art. 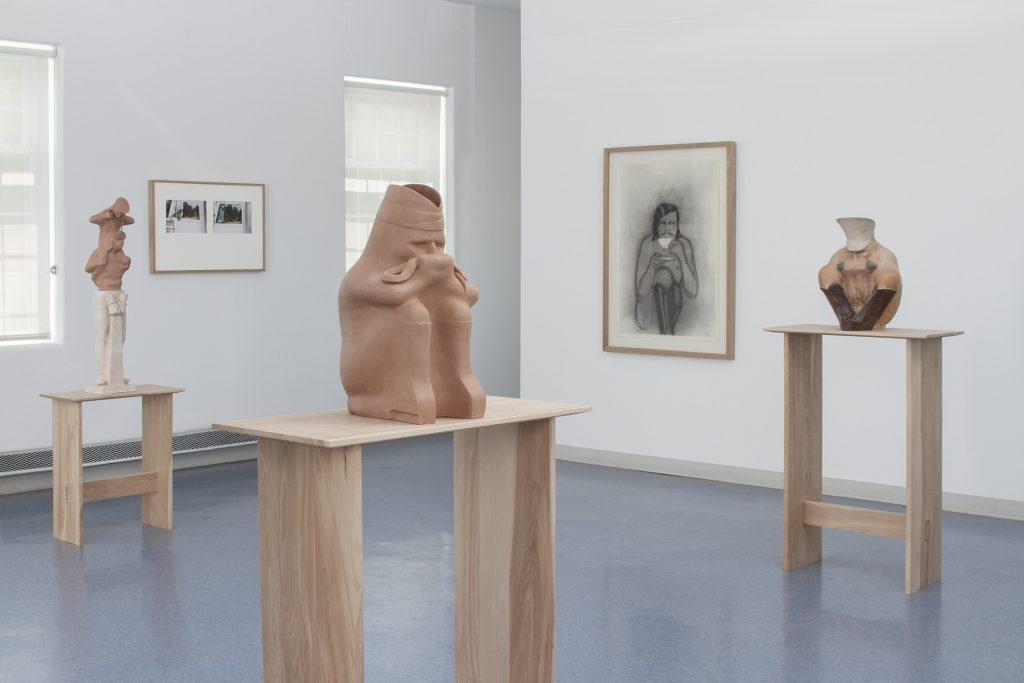 Installation view of Jared Buckhiester’s 2021 show “Too Fair-Spoken Man,” at the Lighthouse Works in Fishers Island, New York. Courtesy of the artist.

Wet Paint in the Wild: Magazzino Italian Art Museum Director Vittorio Calabrese Takes Us From Upstate New York to Houston and Beyond