Home News The Back Room: Keep Calm and Carry Cash 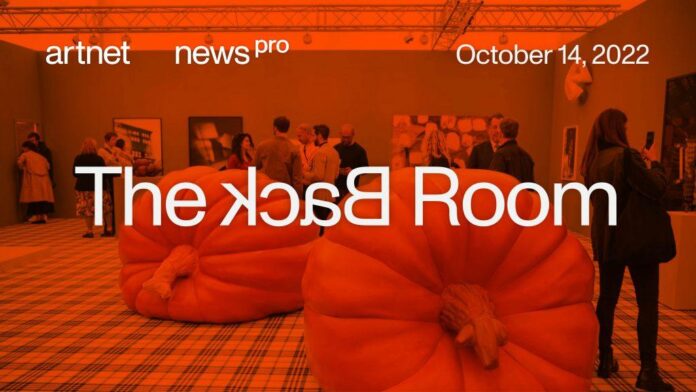 This week in the Back Room: Frieze London in a flash, Paris+ on the horizon, Lucian Freud up for reappraisal, and much more—all in a 7-minute read (1,916 words).

The Beat Goes On 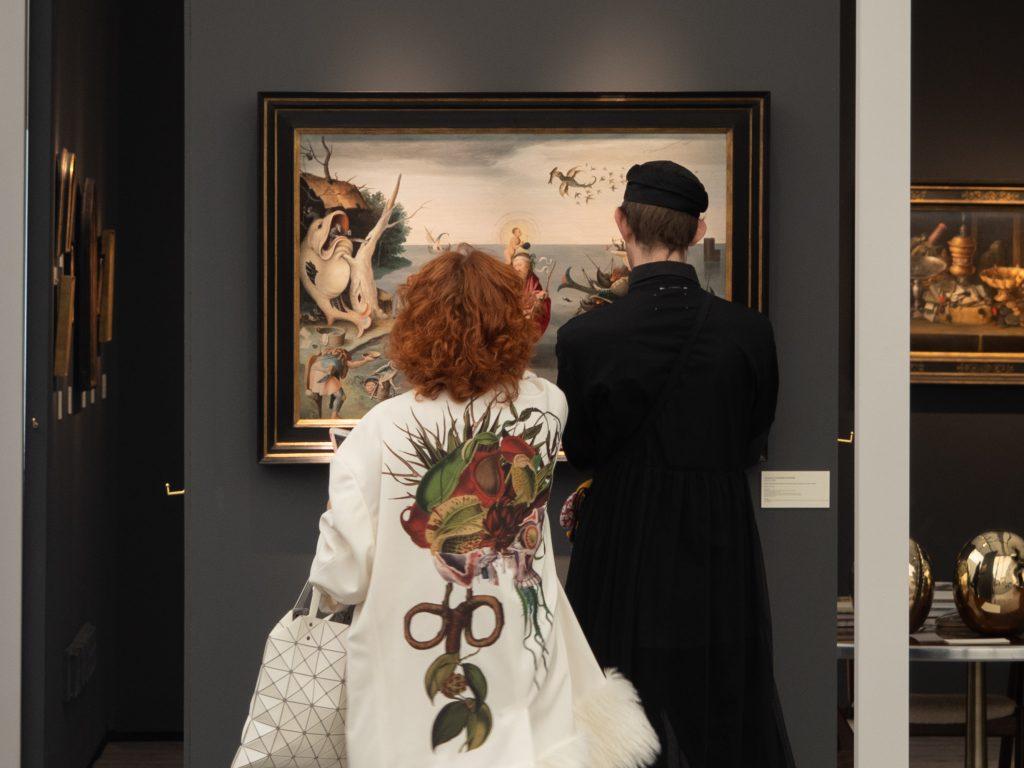 Roughly one year after Frieze Week’s tentative post-pandemic return to London, the city’s flagship fair fully spread its wings against the backdrop of rising tensions in the world economy. Below are our key takeaways from the festivities…

1. Overall Attendance Has Returned to, If Not Surpassed, Pre-COVID Levels.

The opening hours of Frieze London were mobbed with VIPs of all stripes. In fact, some collectors even left early, claiming the extreme crush of visitors was counterproductive to actually, you know, seeing and buying art.

Plenty of others persevered. Major U.S. collectors spotted early on included Pamela Joyner and Lonti Ebers. Institutional groups from the Aspen Art Museum, Centre Pompidou, and Sharjah Art Foundation made the rounds. Even a few celebs showed up, such as actor Jared Leto, original supermodel Claudia Schiffer, and Princess Beatrice of York.

Several buyers based outside of the U.K. said that the close scheduling of Frieze and Paris+ par Art Basel (which debuts next week) was more help than hindrance, making it feasible to wrap two major art weeks into one overseas trip, at least for the time being.

2. VIPs at Frieze Masters Have Never Been Younger or More Diverse.

Despite its general (though slippery) focus on works made before 2000, Frieze’s tandem event brought “a solid turnout of visitors in their 40s, 30s, and even younger, from diverse ethnicities,” Vivienne Chow wrote. That’s a heartening change-up from the predominantly older white audience that has been the standard.

Asia was more prominent than ever on the buy and sell sides alike. Jay Chou, the Mando-Pop king and Taiwanese collector, led the former contingent. A smattering of new Eastern exhibitors filled out the latter, including Johyun Gallery from Busan, South Korea. While it’s hard to tell how directly this boost is linked to the success of Frieze Seoul, the correlation can’t be overlooked.

One theory (put forth here by Zürich-based art advisor Thomas Stauffer) is that many younger buyers are digging in the archives for underappreciated—and thus undervalued—greats because they’ve been priced out of other key portions of the market.

For comparison, here were the richest deals handed to the press during the opening days of Frieze London and Frieze Masters in 2021, courtesy of the corresponding Back Room…

It’s only one segment of the market, but if you too have heard some chatter about this year’s expo underperforming at the apex, the actual numbers don’t support the narrative.

Setting aside that $2 million secondary-market Yukhnovich, the best symbol of this phenomenon was 29-year-old supernova Jadé Fadojutimi—and not just because abstract painting seemed to be overtaking figuration in the aisles this year.

Buyers also pounced on plenty of work by Fadojutimi’s peers in the ultra-contemporary demographic (which we define as artists born in 1975 or later).

5. A Powerful U.S. Dollar Had Complex Effects on Deal-making.

The dollar is stronger than it has been in 20 years, as our colleague Eileen Kinsella detailed. How strong? Greenback-equipped buyers purchasing in the euro or pound are basically “getting a 20 percent discount,” according to economist Olav Velthuis, including at Frieze and Paris+.

The dollar’s might has also defrayed the costs of shipping, install, hotel rooms, and other incidentals for U.S. dealers showing at fairs abroad. Whether these gains have been enough to counter the havoc wreaked by inflation, however, remains up for debate.

Still, don’t overestimate the currency market’s impact on those pricey ultra-contemporary deals. Olivia Davis, founder of the advisory Art of Choice, noted that collectors were traveling to London to get their names on wait lists for new works “regardless of what that exchange [rate] might be, because obviously at auction the prices soar through the roof and anything that you can get at a primary market level… is kind of a steal.”

While warnings about recessions have gotten starker and starker in the past six weeks, sales at Frieze’s expos in Seoul and now London held strong. There are few overt signs of distress elsewhere in the trade, either. In other words, every art-market forecaster waiting for the other shoe to drop is still frozen in place.

Yet none of this means the skeptics are fundamentally wrong. Just this week, the International Monetary Fund said the U.S. Federal Reserve’s aggressive interest-rate hikes had increased the probability of an international debt crisis, and the United Nations began warning that a global recession is almost certain.

The mounting trouble signs clarify that this year in the art market has come to resemble nothing more than an extended game of hot potato, as each major market event hopes to be able to pass the traveling coterie of buyers, sellers, and connectors on to the next event before the countdown to an inevitable contraction hits zero.

Frieze London avoided the buzzer, and it’s highly likely that Paris+ is in the clear with just a few more days before its opening. But for the many sell-side stakeholders banking on strong sales at the November auctions or Art Basel Miami Beach, our guess is that the clock feels like it’s ticking awfully loudly these days.

[Art-Market Effects of the Rising Dollar]

The latest Wet Paint was still being mixed when the Back Room was finished, but here’s what else made a mark around the industry since last Friday morning…

“It will be hard for us to remember FIAC once we’re done with Paris+ next week.”

—David Zwirner, who last year called out FIAC as a fair that “has tended to underperform for us,”  making clear that he thinks Paris’s expo landscape has made a huge upgrade by going with Art Basel. 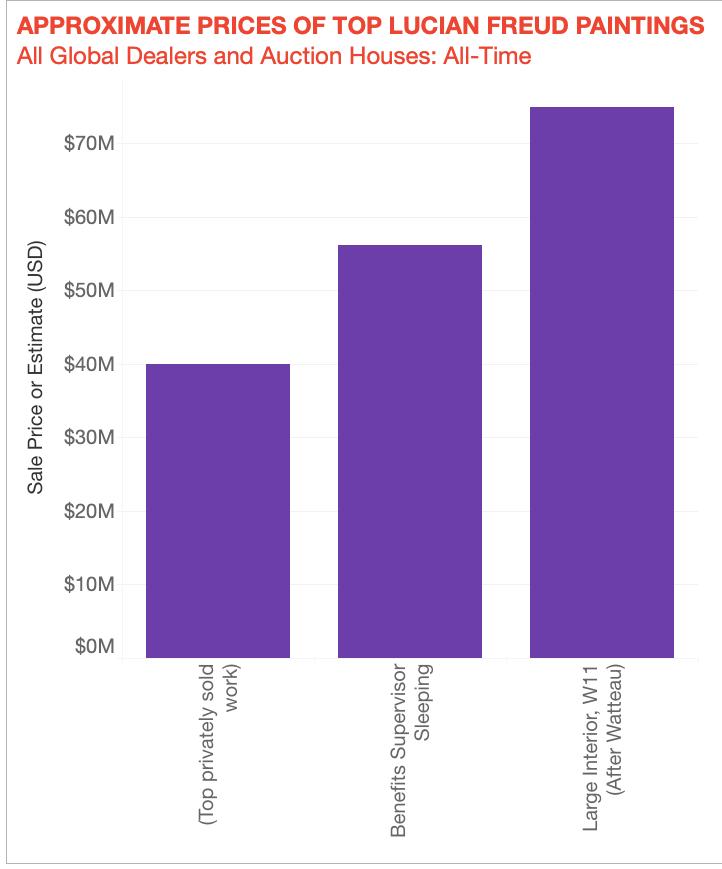 Christie’s hopes to recalibrate the market for Lucian Freud next month when it offers the artist’s (1981–83) as a part of the blockbuster sale of the Paul Allen collection. A freshly opened survey of Freud’s work at the National Gallery in London provides a chance to contextualize how big a shift the house hopes to achieve.

While none of the works above appear in the National Gallery show, it still has a surprising amount to teach us about Freud’s market. Click through below to find out what, how, and why.