Home News The Back Room: One Point Five Billion Dollars 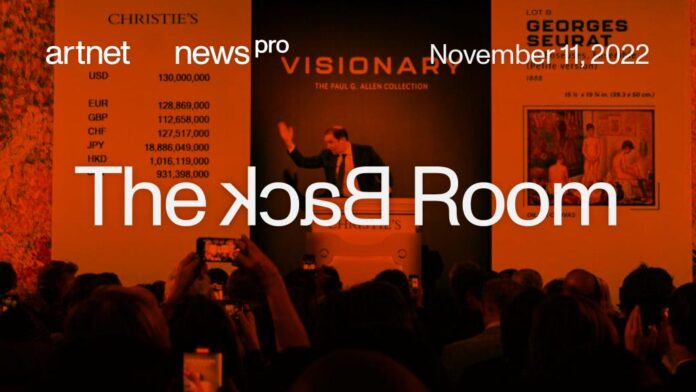 This week in the Back Room: Christie’s makes auction history, a Frida Kahlo legal conundrum, trophy lots keep rising, and much more—all in a 7-minute read (2,033 words). 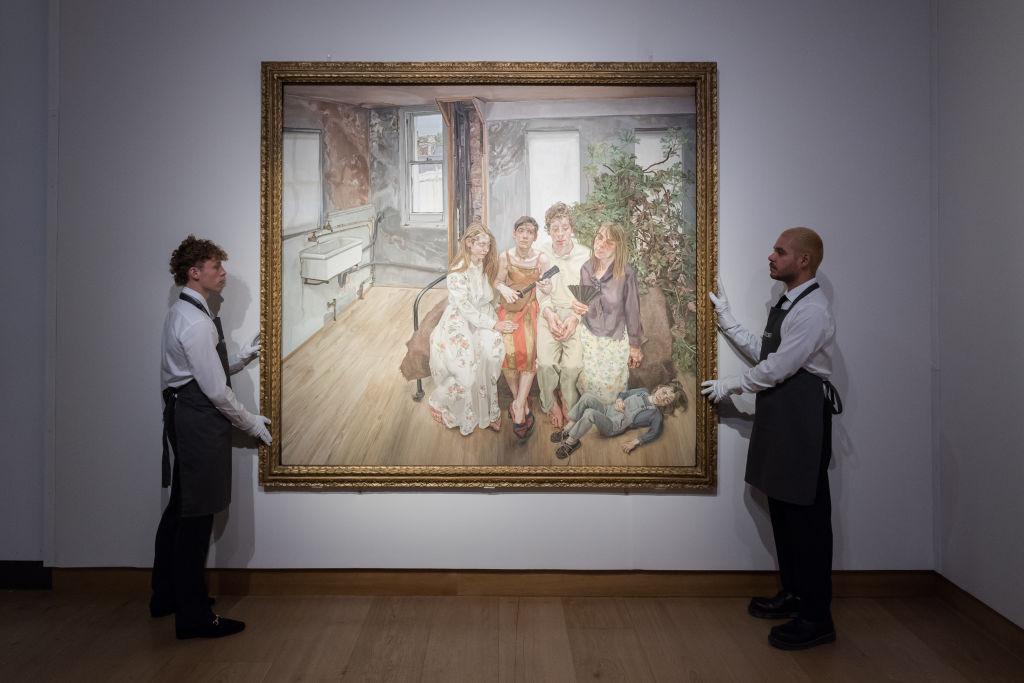 Large Interior, W11 (after Watteau) by Lucian Freud (estimate on request: in excess of $75,000,000) during a photo call to present the highlights from the estate of the philanthropist and co-founder of Microsoft, Paul G. Allen in London, United Kingdom on October 14, 2022. Photo by Wiktor Szymanowicz/Anadolu Agency via Getty Images.

By now, everyone reading this email already knows that Christie’s evening sale of the Paul G. Allen collection in New York brought a brain-bending $1.5 billion after fees on Wednesday. Today, we want to use this space to contextualize the results within the current market moment and broader market history.

Below, five takeaways from the milestone event…

For close to a decade, if not more, staging a single billion-dollar auction has been the Big Three houses’ white whale. Christie’s reeled it in decisively with the Allen evening sale, even without larding on fees or stretching the limits of marketing logic.

Strip away the buyer’s premium, and the hammer total still reached $1.3 billion. That was well over Christie’s presale low estimate of $1 billion, and close to the upper expectation of $1.4 billion. (As ever, presale estimates do not account for premiums.)

With 95 more lots on the docket, Thursday’s day sale raked in another $115.9 million. But Christie’s didn’t need this addendum to stake a claim on the “billion-dollar sale” designation. The evening sale was enough. Mission accomplished.

2. It Was the Richest Sale in Modern Auction History by Almost Any Measure.

Among single-owner auctions, the Allen evening sale reigns supreme even if you grant the most favorable terms to the priciest past competitors. (Note: We’re excluding any associated day sales and online sales to keep these auctions as “apples to apples” as possible.)

Ignore the six-month hiatus between the two evening auctions of the Linda and Harry Macklowe collection at Sotheby’s, and the combined events hauled in $922.2 million after fees. Adjust for inflation, and the premium-inclusive grand total would still “only” hit $971.9 million in today’s dollars.

Christie’s sale of the Peggy and David Rockefeller collection in May 2018 ends up even further south of the goal. Together, the main evening auction and the nighttime sale of the couple’s art of the Americas brought $753 million, which would equate to $888.4 million in the fall of 2022.

The only possible spoiler on record is a multi-consignor Christie’s contemporary evening sale that hauled in $852.9 million after fees in November 2014. Adjusting for inflation would hike that total to about $1.1 billion today.

But the above sale included 21 more lots than were offered from the Allen collection Wednesday night, and some market professionals disagree about whether inflation even affects the fine-art market in the same way as it does for everyday expenses that have far less inherent volatility.

In short, if you want to look down on Christie’s celebration, you’re going to have to contort yourself into shapes likely to make you seem a little odd to almost everyone else.

3. It Was an Unprecedented Bonanza of Trophy Lots.

All told, 60 lots actually reached the block in the Allen evening sale. (A René Magritte drawing with an upper estimate of $1 million was the lone eleventh-hour withdrawal.)

4. And Yet, Bidding Wars Were Scarce.

Wednesday’s most competitive tussles came for lots nowhere near the Allen collection’s summit. Andrew Wyeth’s (1980) sold for a premium-inclusive $23.3 million, more than 7X its $3 million high estimate. Georgia O’Keeffe’s (1927) shot up to $26.7 million after fees despite a top estimate of $8 million.

Nearly all of the marquee lots, in contrast, hammered at or slightly above their presale estimates.

Competition for Gauguin’s Tahitian canvas topped out at $92 million against an estimate in excess of $90 million. A lauded Gustav Klimt forest scene, expected to fetch $90 million, hammered at $91 million. Lucian Freud’s  brought a top bid of $75 million, right in line with its presale estimate. You get the picture.

Still, it would be silly to criticize these results. Christie’s had to assign some aggressive estimates—and pay an undisclosed but no doubt hefty guarantee—to win the Allen consignment in the first place. The house deserves credit for living up to those estimates by whatever means.

5. The Allen Sale Reflected a Market Caught Between Progress and Stasis.

Although bidders from 19 countries vied for the prizes on offer Wednesday night, according to Christie’s, 50 percent of the evening-sale lots went to U.S. buyers. Just 12 percent were won by bidders based in Asia.

But insiders agree that those Asia-based wins included some of the night’s highest-priced works, led by the Seurat that hammered at $130 million. In other words, the quality of the Asian bidding was critical to the sale’s success even if its quantity looked modest.

Despite its incredible breadth in time period and genre, the Allen collection was conservative when it came to gender diversity. Of the 60 lots offered Wednesday, only five were made by women: two by O’Keeffe, and one each by Louise Bourgeois, Barbara Hepworth, and Agnes Martin. Together, those lots brought $57.1 million after fees.

The great unanswered question about Allen’s holdings is whether there is more selling still to come. As our own Katya Kazakina reported, “The full size of Allen’s art collection remains unknown,” and representatives “declined to comment on whether any of the remaining works would be donated or held back for a private museum.”

What’s more, experts estimate that “just a handful of top paintings” omitted from this week’s festivities could fetch another $500 million. The absentee list includes Mark Rothko’s  (1956), at least three major Monet paintings (including a “Nympheas” work that anchored the touring exhibition of Allen’s collection in 2016), and multiple significant Roy Lichtenstein canvases.

So we may not have heard the last of the Allen collection. But no matter what happens next, the gavel strikes that rang out Wednesday night are guaranteed to resonate in the art market for decades to come.

“If he did actually burn it, he is breaking one law… And if he didn’t, if it was a reproduction, then he might have violated copyright law. And if he copied the original with an intent to deceive, it could be fraud.”

—attorney Leilah Amineddoleh on the legal conundrum faced by Martin Mobarak, who live-streamed the incineration of a purported drawing from Frida Kahlo’s diary to promote his series of 10,000 Frida-related NFTs. If an in-progress investigation by Mexican officials concludes the sketch was authentic, Mobarak could face up to 10 years in prison for destroying a national monument… and if it concludes otherwise, well, see above. ()

Erosion Below the Peak 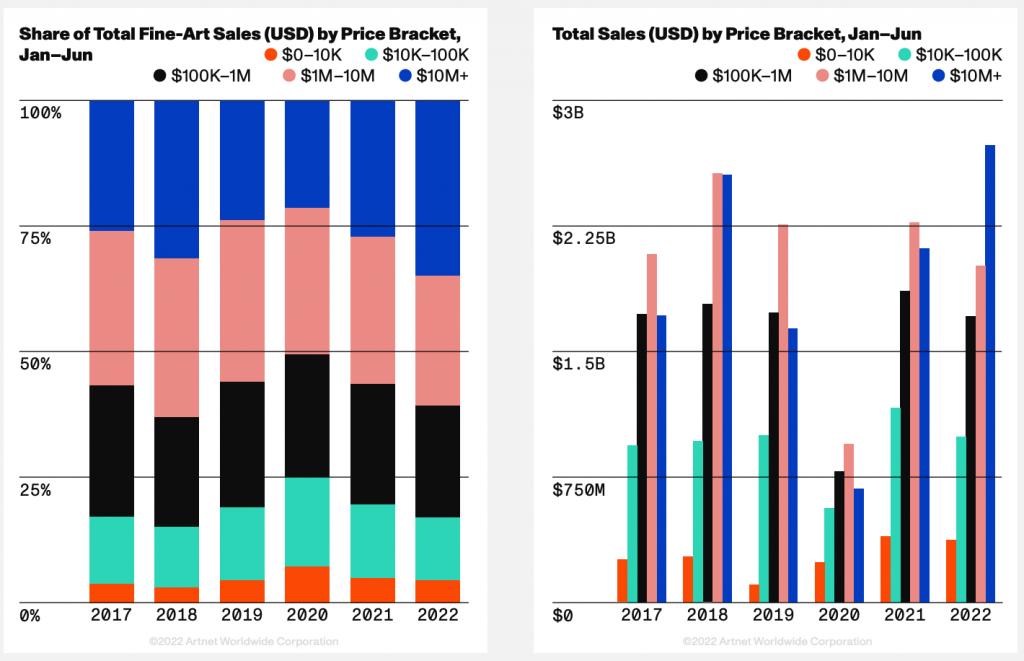 In the first half of 2022, sales of fine art remained largely flat compared to the equivalent period in 2021. But the composition of the market—and the most popular price points—changed considerably in just one year.

Growth at the top end in 2022 has been powered by headline pieces from the Ammanns and Anne Bass at Christie’s, and the Macklowe collection at Sotheby’s. Paul Allen’s unprecedented treasure trove should keep that trend going in the second half of the year, but time will tell how much of the rest of the market will follow.