Home News The Back Room: The Basquiat Slide 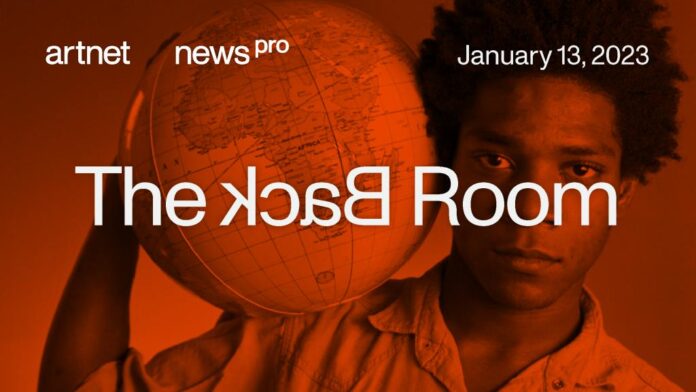 This week in the Back Room: Jean-Michel’s mixed signals, a power couple weathers the storm, top sellers consolidate their auction dominance, and much more—all in a 6-minute read (1,812 words). 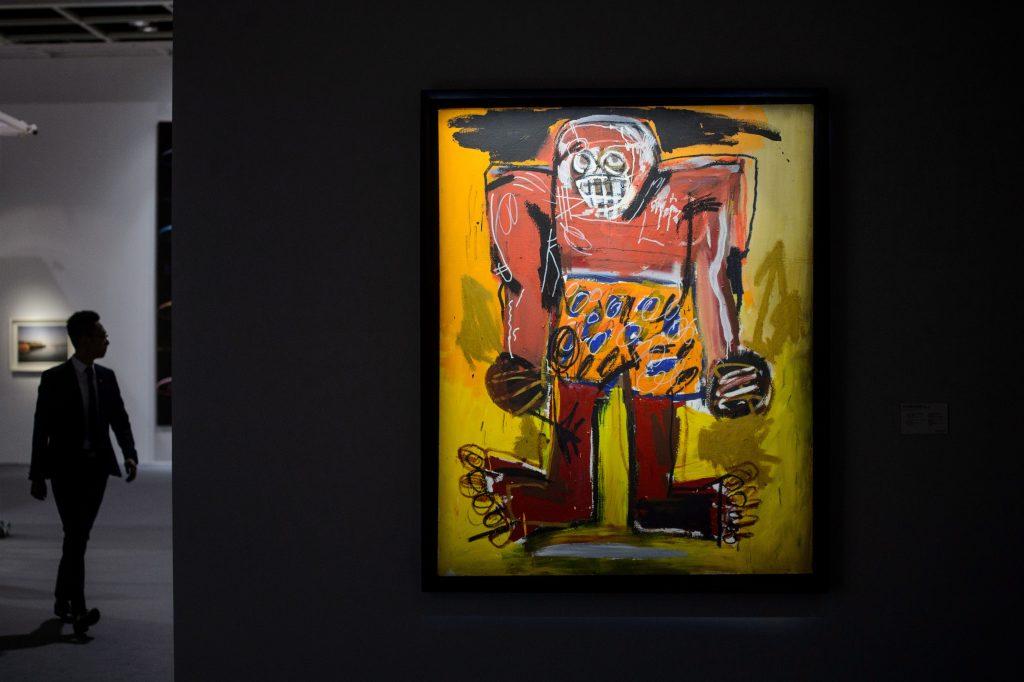 What on earth went wrong with the market for Jean-Michel Basquiat last year?

That was the question driving Katya Kazakina’s first column of 2023. The answers offer a vital perspective on both the state of his legacy and, to some degree, the prospects of the auction year ahead.

“Annual auction sales of works by Basquiat plummeted 50 percent in 2022 compared to a record high $439.6 million in 2021, when the artist was second only to Pablo Picasso in auction revenue, according to the Artnet Price Database,” Katya wrote.

In contrast, the 51 Basquiat lots offered last year generated just $220 million, plunging him all the way to seventh place among top-selling artists under the hammer. (See this week’s Data Dip for more context.)

Basquiat’s peak-performing canvas of 2022 fills out the picture. The work? An untitled 1982 rendition of a devil that fetched $85 million at Phillips in May. The seller? Japanese billionaire Yusaku Maezawa, who nabbed it for $57 million in 2016 and reset the artist’s auction record at that time.

It’s tricky to calculate the true return on his investment. As Katya noted, Maezawa reaped sizable “intangible benefits” from the purchase, which “catapulted the little-known e-commerce retailer to become a sensation in the art world and beyond.”

But, dollar for dollar, Maezawa would have been better off had he parked that $57 million in an S&P 500 index fund instead—a seeming contradiction to the narrative of Basquiat as an enduring secondary-market force.

The downturn in Basquiat’s auction fortunes is especially surprising because “his star has in fact never shone brighter in the popular culture,” Katya wrote.

The artist’s foundation said that “King Pleasure,” its sprawling exhibition of Basquiat art and ephemera that opened in Chelsea in April 2022, ultimately drew 200,000 visitors. The show could double that impressive total when it reopens in Los Angeles in March 2023.

“The Collaboration,” a theatrical production dramatizing Basquiat’s working relationship with Andy Warhol, is currently among the hottest tickets on Broadway. Global demand for JMB merchandise has soared to unprecedented levels over the past several years, and his name is now as prevalent in pop music as references to luxury cars.

Major international art institutions are still eager to bottle the Basquiat magic, too. In June, the Beyeler Foundation will devote its premier Art Basel-concurrent exhibition to the large-scale paintings Basquiat created in Modena, Italy, in 1982, still the most coveted year of the artist’s oeuvre.

So, what gives at auction?

Although some of the biggest forces in the Basquiat market disagree about the exact state of play, they are united in insisting that the core problem in 2022 was supply, not demand.

“The market for Basquiat is very solid,” said Alberto Mugrabi, whose family regularly collects and trades works by the artist. “Everyone thinks they have a $200 million painting. People don’t want to sell.”

Contrast his opinion with that of Hong Kong-based art advisor Yuki Terase, who was the Basquiat whisperer at Sotheby’s Asia for many years: “The market is very volatile and uncertain… Those who can hang onto the works would want to wait and see, unless attractive guarantees and packages are offered that they cannot resist.”

The challenge of supply is particularly glaring at the top. In 2021, eight Basquiat paintings went for more than $20 million at auction, including a $93.1 million top-seller. Only two paintings surpassed that mark in 2022, including the $85 million devil.

But while Basquiat’s annual auction performance may not be reaching the altitudes it once did, his remains one of the “deepest markets ever,” according to Gregoire Billault, Sotheby’s chairman of contemporary art.

Case in point: lots by the artist raked in $68.1 million in New York in a single week last November, despite that there was nothing “super special or completely fresh” on offer, in Billault’s words. That’s both a rare feat and an indicator of how bonkers the bidding could get when the next A+ Basquiat painting(s) hit the block.

The shortest answer to the question of what’s wrong with the Basquiat market is, “Nothing, really.” Last year’s downturn seems to have been about cyclical softening, not structural crisis.

His art-world legacy is secure. His pop-cultural relevance is only expanding. And his auction performance is likely one or two great consignments away from going intergalactic again.

Katya pointed to Warhol to show how quickly the momentum can reverse. After years of such auction dominance that his market was considered a proxy for the entire genre of contemporary art, an extended stretch of mediocre results led many gavel-watchers to wonder if Warhol’s work had permanently lost the crown.

Then Christie’s won the right to sell (1964) from the estate of Doris and Thomas Ammann last year. The painting brought $195 million in May, making it the second priciest work ever sold under the hammer.

The result also propelled Warhol’s 2022 sales total to a pulse-racing $585.9 million, more than every other artist in the Artnet Price Database last year.

There’s every reason to think that Basquiat will bounce back similarly. The real question is not if, but when.

The latest Wet Paint addresses the (false!) rumors of a split between Larry Gagosian and Anna Weyant, as well as Jens Hoffmann’s return to the art scene with a head trip of a new space in Nice, France.Hoffman says he manages the gallerywith two imaginary partners he calls “spiritual co-pilots.” Okay then!

“I left with a feeling of disdain for all galleries and museums.”

Winners Take All (or at Least 10 Percent) 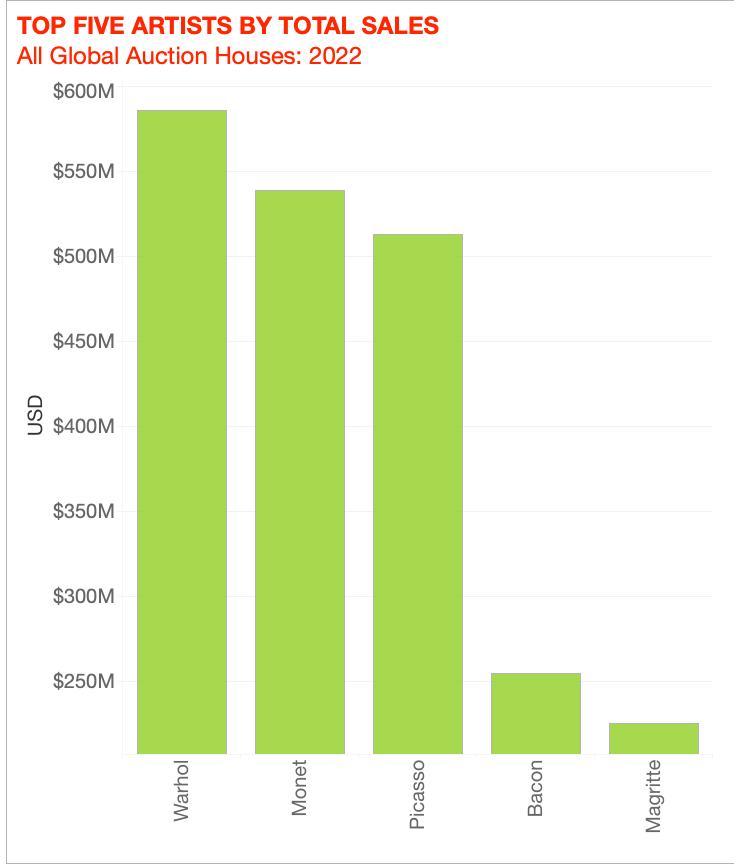 Cumulative sales of works by the top three artists—Andy Warhol, Claude Monet, and Pablo Picasso—pulled in $1.6 billion, or almost 10 percent, of the $16.8 billion in fine-art auction sales notched in 2022, per the Artnet Price Database. That figure underscores the high level of consolidation driving the public market year after year.

The high degree of concentration in the market makes popularity relative (and fickle). Sales of works by Yayoi Kusama, the only female artist to crack the top 10 in 2021, rose year-over-year to $43 million in 2022. Nevertheless, she was pushed back to 12th place last year as the boys’ club consolidated dollars.

An ambitious exhibition at London’s Whitechapel Gallery will celebrate the female artists from around the world who, against the odds, helped redefine art in the post-war period