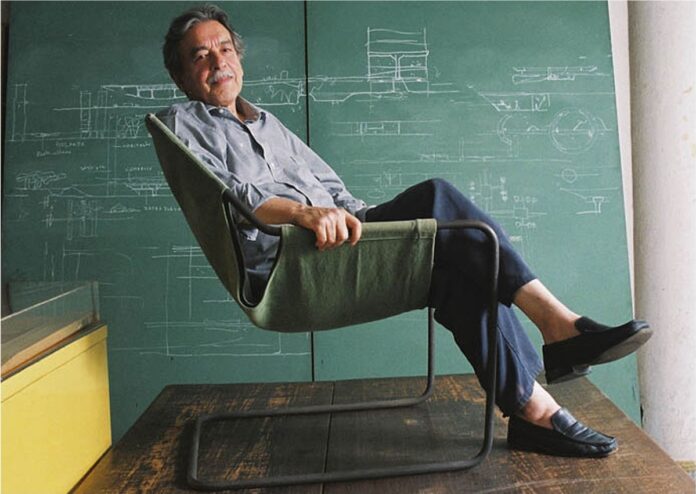 A practitioner since the 1950s, Mendes da Rocha pioneered the Brazilian Brutalism movement, filling his home country with graceful concrete and steel structures. In addition to teaching at the College of Architecture of the University of São Paulo, Mendes da Rocha has received a number of international awards for his work, including:

Paulo Mendes da Rocha was born in Vitoria, Brazil in 1928. In 1954, Paulo graduated from the Faculty of Architecture and Urbanism at Mackenzie University (FAU-Mackenzie).

During his studies, Paulo Mendes, along with other students, organized a group interested in modern architecture, which influenced his projects. From 1961 to 1969, Paulo Mendes was a professor at the School of Architecture and Urbanism of the University of Sao Paulo (USP). He was fired because of his position on the social role that architects should play.

In 1969, Paulo Mendes won the competition for the Brazilian pavilion at Expo’70 in Osaka along with Jorge Caron, Julio Katinsky and Ryu Otake. In 1980, Paulo returned as a professor of architectural design in the same faculty, where he worked until 1999 until he retired.

In 2001, the architect received the II Mies van der Rohe Prize for Latin American Architecture for the neoclassical design of an art gallery in São Paulo (Pinacoteca de São Paulo). In 2006 he received the Pritzker Prize, and in 2016 he was awarded the Golden Lion at the Venice Biennale and the Praemium Imperiale Prize.

In 2017, Paulo Mendes da Rocha was awarded the RIBA gold medal. In 2021 he got the gold medal of the International Union of Architects.

Paulo Mendes da Rocha died on 23 May in a hospital in São Paulo, where he was being treated for lung cancer. In July, he was to be awarded the Gold Medal of the International Union of Architects (UIA) as part of his congress in Rio de Janeiro.

Mendes da Rocha was one of the few architects of real international renown who built almost nothing outside their country.

He became the author of the Brazil Pavilion at the 1970 World Exhibition in Osaka, which impressed the public with its bold design, and the large-scale museum of carriages in the Lisbon suburb of Belem – in 2015. There was also a social housing complex in Madrid, but this is the end of the list of its foreign buildings.

At the same time, the brightness and integrity of the Brazilian heritage of the architect are such that in the first twenty years of the XXI century he became one of the leaders in terms of the number of awards among colleagues.

It is believed to have begun in 2000, when Mendes da Rocha was awarded the “Latin American Edition” of the Mies van der Rohe Prize for his renovation of the São Paulo State Art Gallery: a neoclassical building stripped down to brick in the interior received modern inserts, completely changing its appearance.

The world community discovered this master, and the Pritzker Prize (2006), the Golden Lion of the Venice Biennale for Life’s Contribution (2016), the Japanese Praemium Imperiale (2016), the Gold Medal of the Royal Institute of British Architects (2017) and already the aforementioned UIA Gold Medal, which Mendes did not have time to present.

However, his key achievements date back to the past, the twentieth century, in which he managed to work for 45 years. Paulo Mendes da Rocha is one of the main representatives of the Paulistani, that is, the São Paulo school of architecture, more daring and expressive, perhaps even harsher than the Carioca, that is, the school of Rio de Janeiro (where the main representative is Oscar Niemeyer).

In São Paulo, concrete was not plastered, they liked expressive corners, as a rule, they were more often engaged in social projects. Mendes da Rocha was teaching constantly, until 1999, and his last implementation was in 2017 one of the socio-cultural centers of the SESC series, created together with his constant co-authors MMBB Arquitetos.

The architect has invariably adhered to leftist views. In 1969, he lost his job at the University of São Paulo. But at the same time, he won the competition for the design of the pavilion in Osaka. Obviously, for the new government, in this case, spectacular architecture was more important than the political position of its author.

But when the organizers of the Expo wished to preserve this concrete pavilion after the exhibition as a university school of music, the Brazilian side forbade this, and Mendes da Rocha, in his declining years, recalled the dismantling as a big blow.

Today, the architect is also perceived as an adherent of democracy and the ideas of social justice, which was reminded by the reaction to his death by the Paulist authorities, who, for obvious reasons, emphasized this side of his personality.