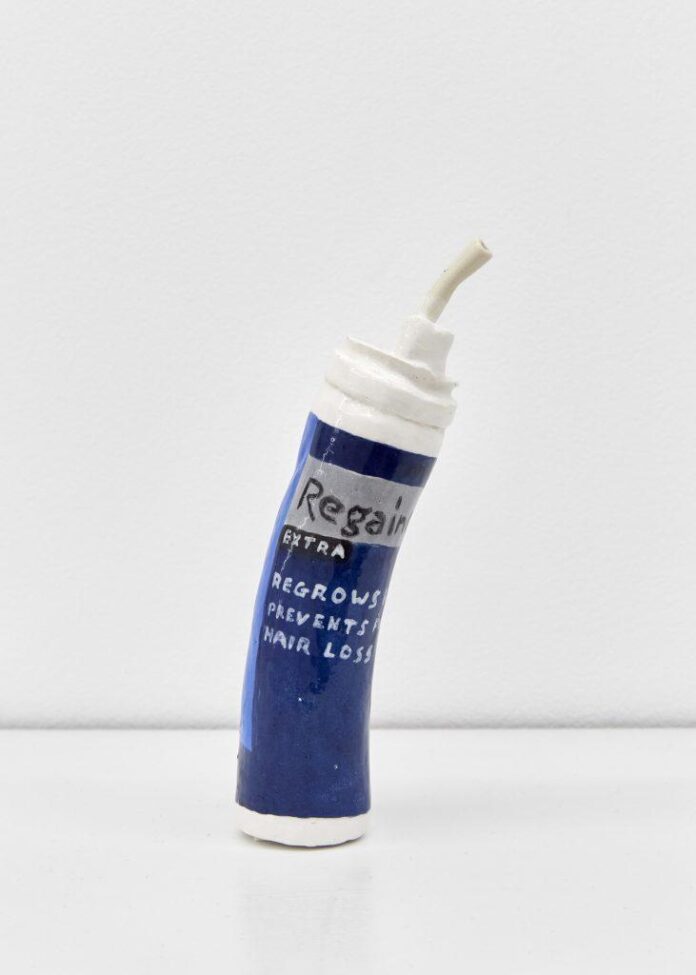 “I have always put myself in the middle of my work,” said Oliver in an interview with Artnet News. “It is an examination of how I am posited within the context of a wider culture. Ideas of masculinity have been in my work since I first used WWF wrestling as a subject years ago, which I was completely obsessed with as a child.” 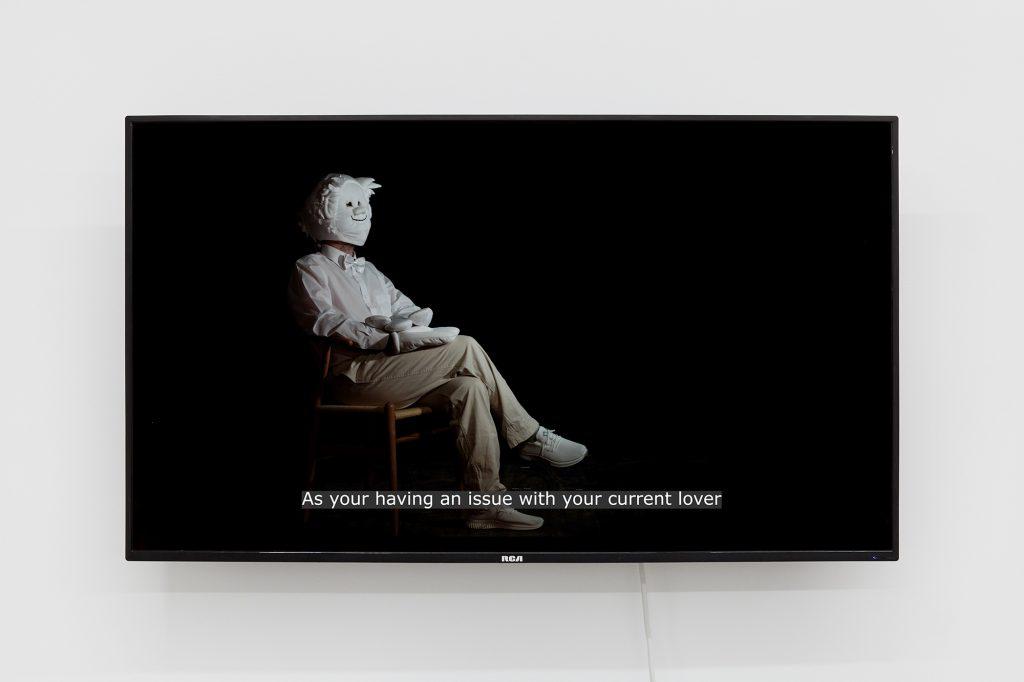 A graduate of the Royal College of Arts, Oliver is one of the most exciting names in Margate’s art scene. He co-runs the emerging artist space Quench (which is currently showing James Metsoja and a group exhibition exploring thirst), with fellow artist Lindsey Mendick. In 2020, Oliver won the Jerwood/FVU award, which led to the commission of the piece, You Know Nothing of My Work.

Both witty and alarming, the exhibition combines YouTube videos (including one featuring a man explaining how to breathe into your balls so as not to speak in a “castrated fashion”), with personal monologues about erectile dysfunction, hair loss, and body image. During particularly sensitive moments, Oliver is disguised as Mr. Soft—the mascot of British confectioner Trebor’s popular Soft Mints. The mood switches in seconds from self-pity to humor and the violent ends of masculinity: war.

“This work has come out of actual experiences over a large chunk of my younger life,” said Oliver. “It seemed to be an ideal way of talking about masculinity, particularly embarrassment, shame, vulnerability, and on the flipside—anger and aggression. I have never felt so nervous and uncomfortable showing work in my life. I’m addressing things that I’ve spent a long time trying to hide but hope that tension will make it meaningful.”

The work explores how men speak to one another. The YouTube videos often take a “tough love” approach, but there’s also a sense of everything that is not said. In one scene, the artist describes a young man holding up a ticker tape while Oliver was DJing. The tape stated that his music choices were making the man soft. Was the man trying to communicate something of his own erectile concerns, wonders the artist, while hiding behind this insult?

“In my own versions of the bro videos, I start being quite abusive to the viewer, but end up apologizing and saying they should be treated like a prince,” said Oliver. “It’s a bit like PUA [pickup artist] strategies of negging women to get their attention. Often bro videos talk about being vulnerable to ultimately be strong. I came across them while looking for help some years ago. I followed Farhan Khawaja [a.k.a. Doc Testerone] even though I found him repellent in many ways. His narrative is that he was a total loser, Ph.D. nerd, and had chronic erectile dysfunction until he went into the science of testosterone and turned himself into a love god. It is a seductive narrative that offers practical solutions, comparable to other self-help routes. But it’s a short algorithm away from more sinister things. It’s linked to PUAs, [clinical psychologist] Jordan Peterson, and Alt-right politics.”

The poetic use of language and musical beats accompany the video. Oliver plays with popular lyrics from the Pet Shop Boys, including “What have I done to deserve this,” and weaves references to performance artist Laurie Anderson’s iconic 1981 song O Superman throughout.

“O Superman has a distinct critique of masculinity,” he said. “Laurie Anderson is quite androgynous yet feminine, and her fist gesture that I have referenced is provocative and funny. There are references to American military power in the song, and it felt right to include [former U.S. president Donald] Trump in the video as a symbol of where you end up if you take the male ego and entitlement to the limit. ‘What have I done to deserve this?’, is meant ironically, like the original, to address the unironic self-pity I have felt in the past. I want to talk about self-pity as a destructive force that can lead to extreme behavior if allowed to fester.” 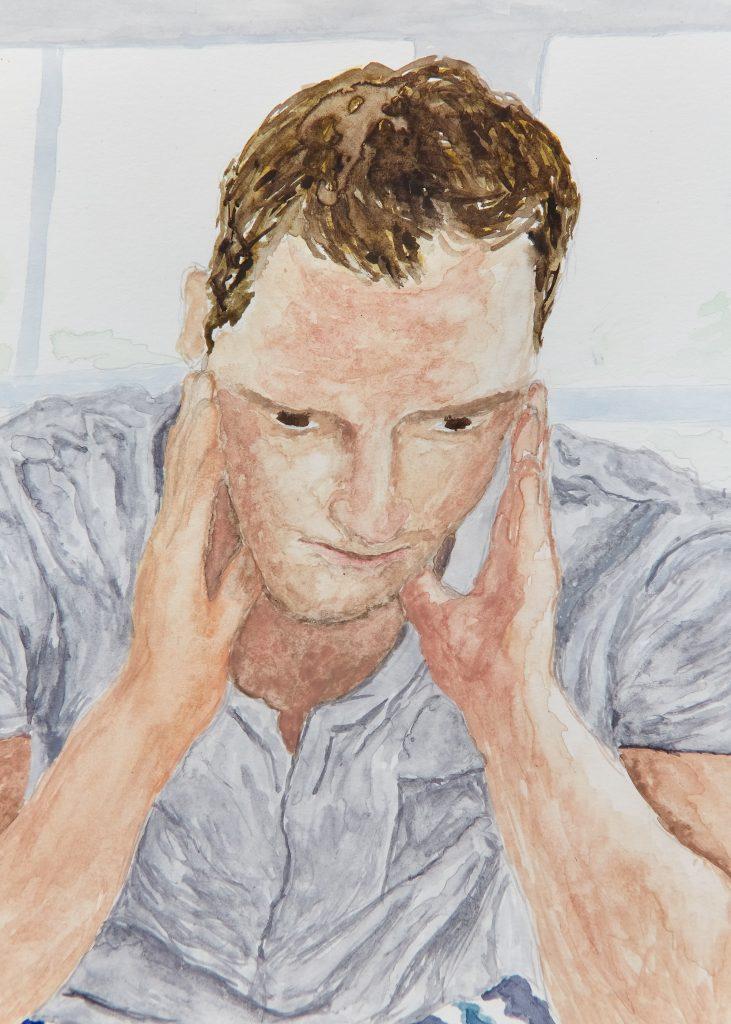 A detail of Hey It’s Fine (2022) from Guy J. Oliver’s exhibition, “We Put the Unction Into Erectile Dysfunction”, at London’s Brooke Benington. Image courtesy of the artist and Brooke Benington.

The Year Everyone Died is a 2021 video essay that discusses the spate of celebrity deaths in 2016, including the deaths of David Bowie and Carrie Fisher, alongside Oliver’s personal losses. Other moments from the year that rocked the world are threaded throughout the piece, from Trump’s election to Brexit. The Commissioner (2022) examines the artistic commissions of the Egyptian billionaire businessman Mohamed Al-Fayed, interspersed with clips of him on Da Ali G Show and snippets of his late son, Dodi, with Princess Diana.

Upon viewing We Put the Unction Into Erectile Dysfunction, it becomes apparent how universal these issues are. Body confidence and the pressure to perform in a certain way impact everyone, but these conversations still seem stilted around masculinity. “It is a taboo subject,” said Oliver. “Even talking about the exhibition beforehand, sometimes people didn’t know how to react. It has been encouraging since it opened though. A couple of friends have told me they had the same problems I refer to, like excessive blushing, and it really affected them when they were younger. I hope things are opening up but I think it’s the responsibility of male artists to be honest and address their own experience.”

Art Basel Miami Beach’s 20th anniversary edition, with 12% more galleries than last year, will be its largest ever