Home News The furniture restorer disfigured the Madonna of the XVII century – and... 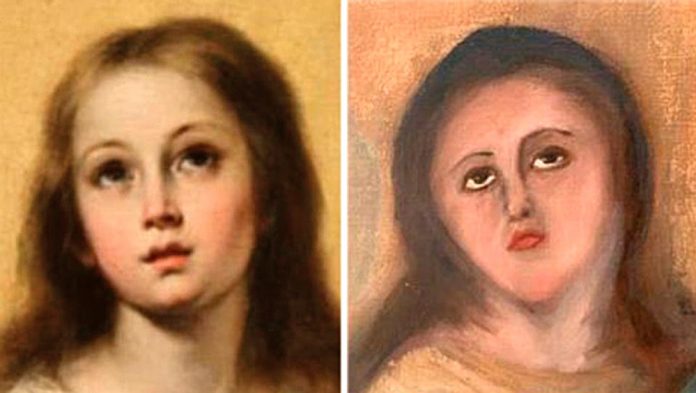 The Spanish community of professional restorers calls for stricter regulation of the industry.

An unsuccessful attempt to restore the canvas “Immaculate Conception“, undertaken by a furniture restorer, disfigured the angelic face of the Virgin Mary beyond recognition. According to the Spanish news agency Europa Press, it is a copy of the work of the master of the XVII century Bartolomé Esteban Murillo. The painting comes from the collection of a private collector from Valencia, whose identity is not disclosed. The owner gave the painting for cleaning to some specialist in furniture restoration, who requested € 1.2 thousand for the work. Seeing it after processing, the collector demanded a correction of the result, but a second attempt only exacerbated the situation. Now he has finally given the painting to a professional restorer of paintings in the hope that he will be able to restore it.

This is by no means the first notorious attempt at a failed restoration in Spain. In 2012, a parishioner of the Temple of Mercy in the city of Borja, who was guided by the best intentions but had no professional education, tried to restore the fresco “Beh, Man! The result of her efforts became widely known as “Fluffy Jesus”. In 2016, in the town of Estella in northern Spain, the colors of a 16th-century polychrome sculpture depicting St. George with the dragon were inappropriately renewed. In 2018, in Ragnadeiro, also in the north of the country, several Renaissance religious statues, painted in screaming colors by a parishioner, were the victims of unprofessional restoration.

Maria Borja says that, although some non-professional restoration attempts have become widely known by becoming memes on social networks, there are in fact many more such cases. “Unfortunately, they happen much more often than you think,” she said. – Spain’s cultural heritage is in a very vulnerable position.

Hong Kong is growing as the center of precious stones and jewelry, reflecting the Asian appetite for alternative securities