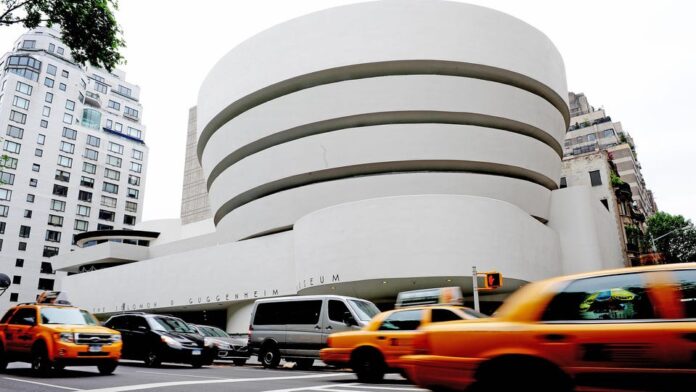 The National Gallery in London and the Guggenheim Museum in New York are the latest in a series of major art museums to scrap the billionaire Sackler family’s name from their walls, leaving only a handful of museums with the name after it became inexorably linked with the opioid crisis responsible for killing hundreds of thousands of people.

The room holds some of the most popular British paintings in the museum’s collection by artists like William Hogarth, Joshua Reynolds, George Stubbs and Joseph Mallord William Turner.

The Guggenheim also renamed its Center for Arts Education—which previously bore the family name since it opened in 2001—in agreement with the Mortimer D. Sackler family, the Guggenheim told Forbes in a statement, saying the decision was “in the best interest” of the museum.

Both the Guggenheim and the National Gallery announced in 2019 they would no longer accept funding from the Sackler family after lawsuits alleged that members of the family took part in efforts to downplay the dangers of Purdue Pharma’s drug OxyContin.

Last month, the Mortimer and Theresa Sackler Foundation and The Sackler Trust announced the member trustees would work with any institution that wished to “reassess its naming obligations to our family” in order to make sure the institutions “can pursue their missions without distraction or unwarranted pressure.”

The British Museum and the Tate galleries in London, the Metropolitan Museum of Art in New York and the Louvre in Paris all previously bore the Sackler name in galleries, wings and rooms.

While most of the world’s major museums have scrapped the Sacklers, the main holdout is London’s Victoria and Albert Museum. In 2017, the V&A unveiled a new $3 million pavilion and education center named after the family. The museum’s director, Tristram Hunt, told The Guardian in 2019 that the V&A had no plans to begin “taking names down or denying the past.” Theresa Sackler, the wife of late Purdue Pharma co-owner Mortimer Sackler, served on the V&A board of trustees for nearly a decade until 2019. The American Museum of Natural History in New York is home to the Sackler Institute for Comparative Genetics and the Sackler Educational Lab, both named for the family.

Not all of the money donated to museums by the Sackler family has ties to opioids. The Brooklyn Museum’s Sackler Center for Feminist Art and the Smithsonian National Museum of Asian Art’s Arthur M. Sackler Gallery in Washington, D.C., are named for Arthur Sackler and his descendants, who did not benefit financially from OxyContin. After Arthur died in 1987, his descendants sold his stake in the company to his brothers, Mortimer and Raymond. Purdue Pharma was incorporated in 1991 and released OxyContin five years later.

Nearly 500,000 Americans died of opioid overdoses between 1999 and 2019, according to the Centers for Disease Control. In March, members of the Sackler family agreed to pay out as much as $6 billion to settle litigation from states over their alleged role in the opioid crisis. The deal shields them from future civil lawsuits but not criminal charges. The Sackler Trust and the Mortimer and Theresa Sackler Foundation did not immediately respond to Forbes requests for comment. One of the paintings in the National Gallery’s former Sackler Room, Turner’s “The Fighting Tremiere,” was voted the country’s greatest painting in a landmark BBC poll, is depicted on Britain’s £20 notes and even played a key role in a scene of the 2012 James Bond film Skyfall that was filmed in the Sackler Room.

$10.8 billion. That’s how much the Sackler family was worth in 2020, according to a Forbes estimate.

Despite Years Of Litigation, The Sackler Family Behind OxyContin Is Still Worth Billions (Forbes)