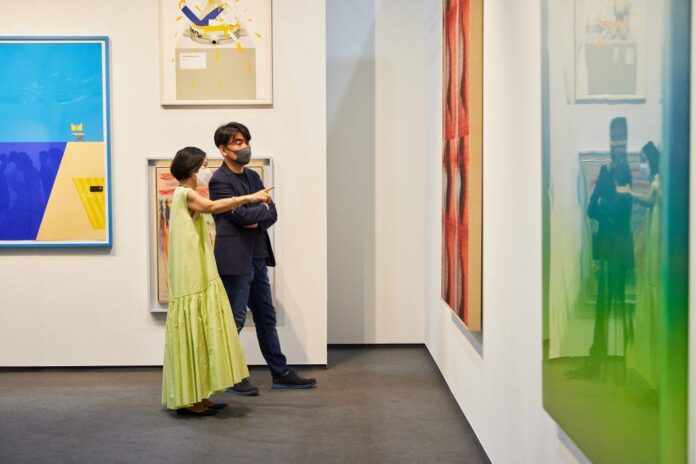 At 2 p.m. in Seoul, Frieze opened the gates to its inaugural edition in the South Korean capital. In many ways, it looked like a standard art fair—harmonious branding, popping corks of Ruinart, familiar blue-chip fare. But there were a few notable differences. First, while many countries have moved to a new phase of the pandemic normal, most people in attendance were masked. Second, unlike the more obstreperous crowds thronging fairs in the U.S. and Europe, VIPs formed an orderly line to enter.

Inside the CoEx convention center, which is also hosting the long-running Kiaf and the new media-focused Kiaf+, the aisles were abuzz—particularly as BTS frontman RM made his way through the fair. While talk of a looming recession has left some less than optimistic about the state of the market, Asia’s surging young art-buying crowd—known locally as the MZ generation, a portmanteau of Millennials and Gen Z—seems as hungry as ever for art.

Early sales from the more than 110 participating galleries ran the gamut: Hauser and Wirth sold a $2.8 million George Condo to a private museum in South Korea, local dealer Jason Haam sold an Urs Fischer painting to a Seoul-based collector for $1.2 million, and Dastan Gallery sold works by Ali Beheshti priced between €1,200 and €3,500. 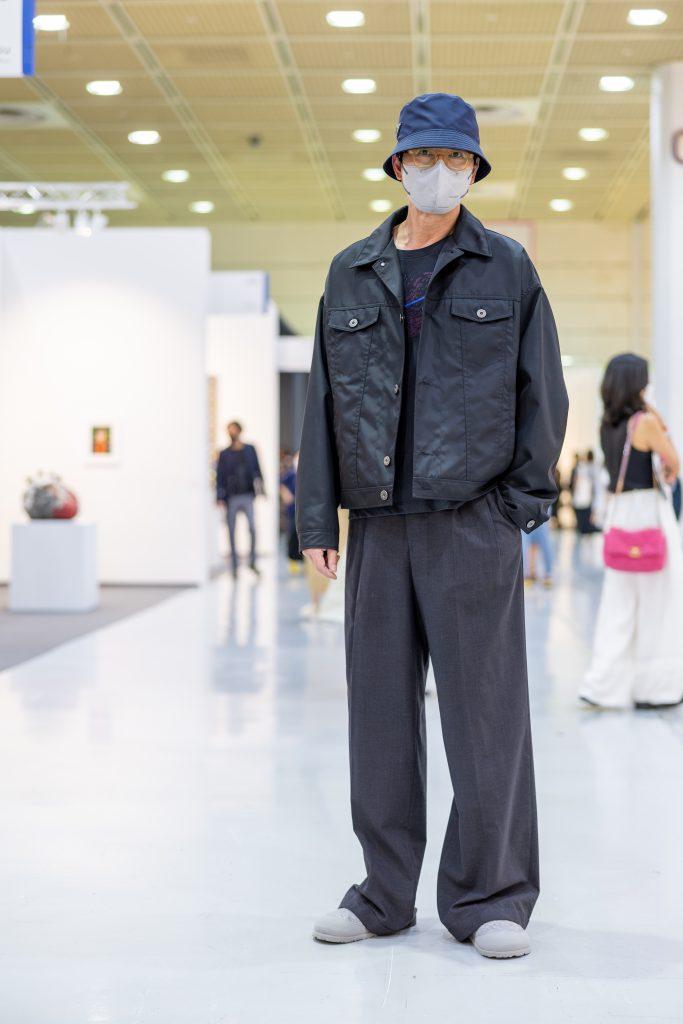 From Boom to Boom

Seoul experienced an art boom in the early 2000s, but was hampered by the financial crash in 2008. Now, the city is having its moment again. As its international cachet, a slew of international galleries—Pace, Gladstone, Perrotin, and more—opened or expanded outposts in the city. Christie’s and Phillips also held exhibitions in Seoul this week.

Against this backdrop, the central question going into the fair was whether Seoul would become an—if not the—leading hub for the art business in Asia after strict lockdown restrictions, the threat of a property crash in mainland China, and a crackdown on democratic freedoms in Hong Kong hampered rival cities.

The excitement was palpable. “For us to host an art fair like this, for an event like this to have a Picasso, and galleries like Acquavella and Gagosian, it’s a pride of the nation,” Haam told Artnet News. “Everyone is excited, everyone is ready to spend.” Though some pointed out that it is reductive to pit Hong Kong and Seoul against one another, as there is plenty of room for multiple hubs in Asia, Haam acknowledged that Seoul’s positioning as an art-market hub post-Hong Kaong was “very persuasive.”

“It’s important that this country is free: free for commerce, free to speak, and free to show things,” he said. “This is a very democratic country, we’ve seen our president be impeached, it’s very crime-free. There are some issues and problems we have to tackle: it’s not beautiful, it’s not New York or Paris, and the alphabet is different so it is difficult to navigate and it was a shipping nightmare for everyone, and there is a lack of professional services like PR companies for local galleries—but it’s a freeport for art, and it’s a great place to do business.”

Broadly, galleries seemed happy with the new connections they were making—although it was amid grumbling over everything from shipping costs and red tape surrounding visas to hurdles such as lost suitcases and difficulty getting a taxi. There was also some negative sentiment from homegrown dealers about the major fair stealing focus from its longer-running local counterparts, as well as accusations of unimaginative offerings or inventory dumping from the major blue-chip galleries. Overall, however, the consensus was that Frieze was bringing a positive impact on the local ecosystem.

Fair director Pat Lee was thrilled by the turnout of collectors from across the wider region, including Japan, Singapore, and Thailand. “I’m very happy that Asian collectors came, because this is not just a Korean fair it’s an Asian fair,” Lee said. “I am ecstatic at how the city has really embraced this event. Not just the artists and the galleries but museums, culture spaces, fashion houses, restaurants.” 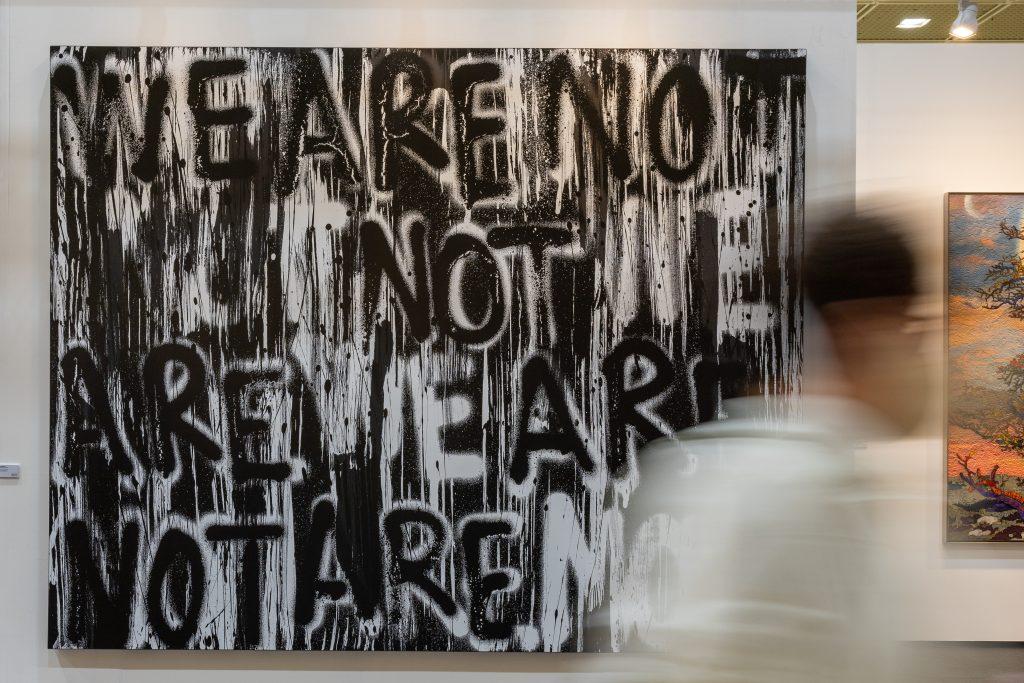 A guest passes by Pace gallery’s booth at the Frieze Seoul VIP preview on September 2, 2022. (Photo by Justin Shin/GA/ARTNews via Getty Images)

K-pop sensation RM’s spin around the fair included a stop by the booth of Austrian dealer Thaddaeus Ropac, who praised his research and knowledge of the gallery’s program. “K-Pop stars are very influential and I think they also made the difference for why young collectors are so drawn to art,” Ropac said.

Ropac sold several works across a range of prices including a Tom Sachs for $300,000 and a work by Lee Bul for $190,000. The gallery also sold the majority of its Anselm Kiefer exhibition in its Seoul space for prices of up to $1.1 million (Kiefer, who will also have an exhibition at the forthcoming CNCity Museum opening in Seoul next year, has forbidden his dealers to show his work at fairs). Most of the works went to Asian collectors, according to the gallery.

International galleries without full-time outposts in the city stressed the desire to sell to Asia as well, and were most interested in introducing their program to new audiences. “We want to prioritize people in the region and not just sell back to the U.S. and Europe,” Swiss dealer Gregor Staiger told Artnet News.

For locals like Yoonsung Stephanie Cho of Hakgojae Gallery, showing in Masters section, the fair was also about making connections with colleagues. “One of our main goals is to meet other gallerists from around the world,” she said. Indeed, as Seoul becomes a more interesting place for artists to show, local galleries can take advantage of that to work with established artists; Haam, who founded his gallery less than five years ago, showed Urs Fischer at the fair.

With such a focus on relationship building, the pace of sales was slower than at other Frieze events. “For galleries, I think it’s going to be less about immediate sales this week and more about the contacts, and that will then drive future sales,” Alex Branczik, Sotheby’s head of contemporary art in Asia, told Artnet News.

“With Korean collectors it’s a slow burn, but in the long term they are loyal,” fair director Lee noted.

Martin Klosterfelde of Skarstedt, which was showing alongside 17 other galleries in a tightly focused Frieze Masters section, had presold a few works to Korean collectors, but confirmed that patience was the name of the game. “In Basel, everything happens on the first day but I think this is more like Hong Kong, where it’s quite busy every day,” he said. 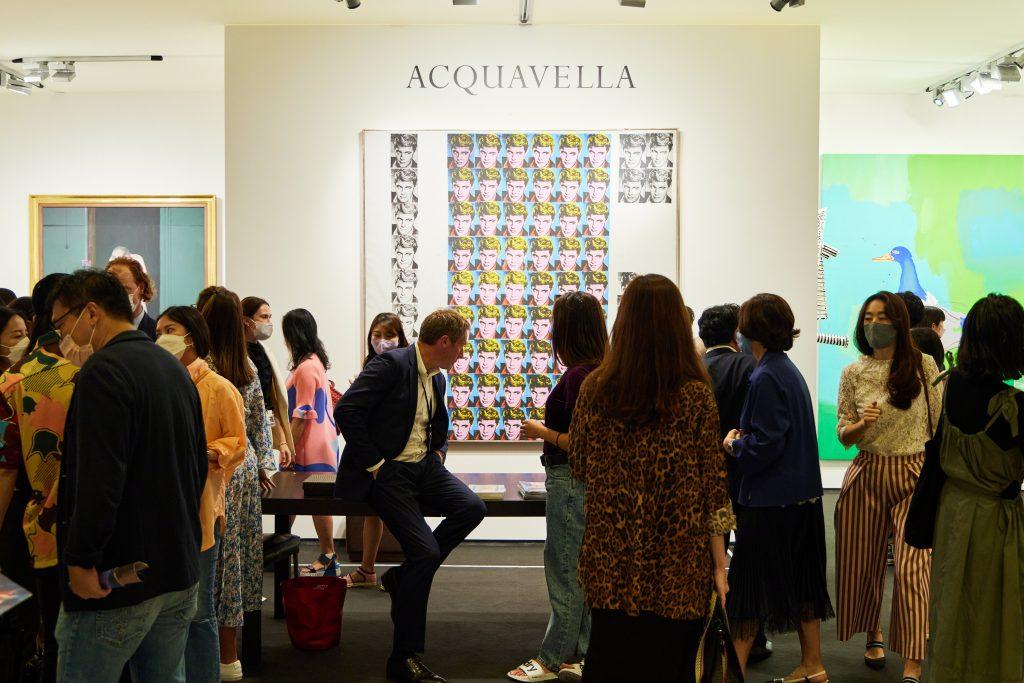 Still, galleries did release a bevy of top line sales by the end of the day. All 15 of Hauser and Wirth’s sales (including a $1.8 million Mark Bradford) went to collections in Korea and the wider region. Sprüth Magers placed a $1.6 million Condo with a Chinese collector. David Zwirner sold a Donald Judd sculpture for $850,0000 while Pace sold an Adam Pendleton silkscreen painting for $475,000 to a museum in Asia. Almine Rech sold a work by Ha Chong Hyun for between $300,000 and $400,000 and Lehmann Maupin sold a new work by Nari Ward for $275,000.

There was a strong presence of artists at the fair, from Katherine Bernhardt holding court at David Zwirner to Singapore artist Fyerool Darma at Yeo Workshop. Singapore has been positioning itself as a contender for the crown of Asia’s primary art-market hub—Sotheby’s held its first live auction in the city-state in 15 years, which brought in $18 million at the end of August.

Gallerist and art consultant Audrey Yeo, who was one of the project directors of the Singapore fair Sea Focus, said there was still a ways to go for the city-state. “One of my learnings over the years is that you can develop all the hardware that you want but the most important thing is the software,” she said. “In Singapore, we have such great infrastructure, but I think what we need to focus on now is our content and out artists if we hope to catch up to what’s happening in Seoul.”