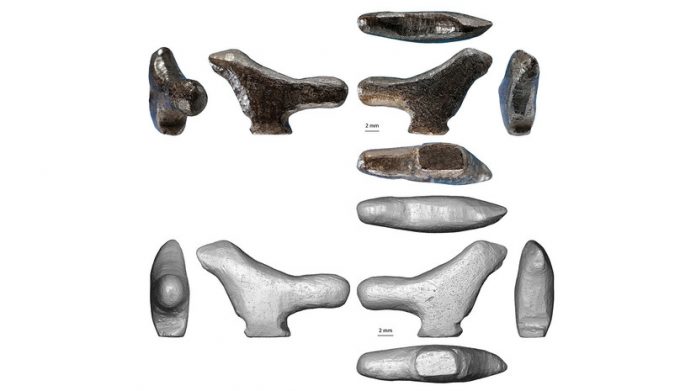 An international team of archaeologists has discovered the oldest known work of art in China. They found a miniature bird statuette carved from burnt bone. According to scientists, the age of the find is from 13 thousand to 14 thousand years. This is the oldest image of a living being on a pedestal – such works of the Paleolithic era have never been seen before. According to researchers, the discovery points to the original artistic tradition, stylistic and technical analogs of which are not present neither in Europe nor in Siberia. Previously, the oldest Chinese sculptures were considered to be found near Beijing statuettes of animals from the rocks – their age is about 5 thousand years.

Archaeologists from China, France, Norway, and Israel identified the oldest work of art in East Asia as about 13-14 thousand years old. This is reported in the magazine PLOS ONE.

Previously, in East Asia, the oldest statues were found near Beijing animal statuettes of jade and talc chlorite – their age is about 5 thousand years.

A miniature statuette on a pedestal with the image of a bird carved from burnt bone was found at the excavation site in Linjin, 15 km from Xuichang city (Henan province, China).

The chief author of the study, Shandong University archaeologist Li Zhangyang, began the first excavations in Linjin back in 2005. He found 11 distinctly stratified layers covering the period from 120,000 years ago to the Bronze Age, and found that a significant portion of the Paleolithic fifth layer was removed during digging a well in 1958.

Fortunately, the excavated soil was found nearby. Having sifted the soil from the heap, the authors of the study found several artifacts, including ceramic shards, burnt animal remains, and the bone statue of a singing bird on a pedestal.

The found artifact was in an exceptional state of preservation, archaeologists say. As a result of carbon analysis, archaeologists have established the approximate age of the bone that went into the manufacture of the statuette – from 13 thousand to 13.8 thousand years.

As a result of the study, it was proved that even then in modern China lived hunters and collectors, who mastered the art of bone carving with tools. The statuette was examined by methods of confocal microscopy and microtomography to better reveal the carving technique of prehistoric sculptor. Production was found to have combined four different techniques: erasing, squeezing, scraping, and notching.

Another feature of a finding is that all known Paleolithic Venus and figurines of animals have no pedestal while at a bird the basis is clearly seen, mark researchers. In their opinion, this points to an original artistic tradition, stylistic and technical analogs of which were not in the Paleolithic era in other parts of the world.

“This finding reflects an original artistic tradition and shifts the dating of birds in Chinese art back more than 8,500 years. The figurine differs in its production technology and artistic style from other specimens found in Western Europe and Siberia,” archaeologists said.

Recall that from Paleolithic times to the present day mostly abstract rock paintings and prehistoric veins, which were found in Europe and Siberia. The most ancient statuette is considered to be found in Germany a carved human figure with the head of a cat, which is about 39-40 thousand years old. The oldest work of figurative (not abstract) art to date is a rock depiction of a hunting scene in the cave of the Indonesian island of Sulawesi, which is about 44 thousand years old.

The Lion, The Witch And The Wardrobe Review – Sally Cookson Conjures Magic Of Make-Believe