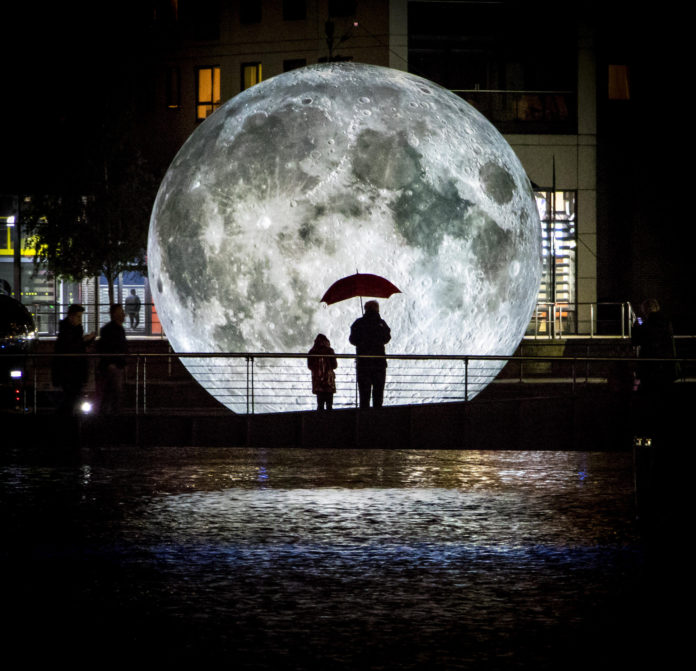 Multidisciplinary artist Luke Jerram has created several exacting 23-foot replicas of the moon, which are currently touring the world as Museum of the Moon. The lunar project has been installed in public spaces ranging from China and Finland to the United Arab Emirates and Australia, and is accompanied by music from composer Dan Jones. Locations vary and include indoor and outdoor spaces as well as festivals, to intentionally alter the interpretation and experience of the project for viewers around the world.

To create the large illuminated sculptures, the British artist used a massive image (nearly 70 feet wide) of the moon created by NASA’s Astrogeology Science Center. The image itself was taken by a NASA satellite carrying the Lunar Reconnaissance Orbiter Camera, which was launched in 2010. Each centimeter of Jerram’s replicas represent 5 kilometers of the moon’s surface.

Jerram also shares in a statement, “As it travels from place to place, it will gather new musical compositions and an ongoing collection of personal responses, stories and mythologies, as well as highlighting the latest moon science.” This information is compiled on Museum of the Moon online research page. You can find out where the moons will be next on the museum’s website and see photos with the #museumofthemoon hashtag. (via designboom)

In Philadephia, Another Battle for Freedom