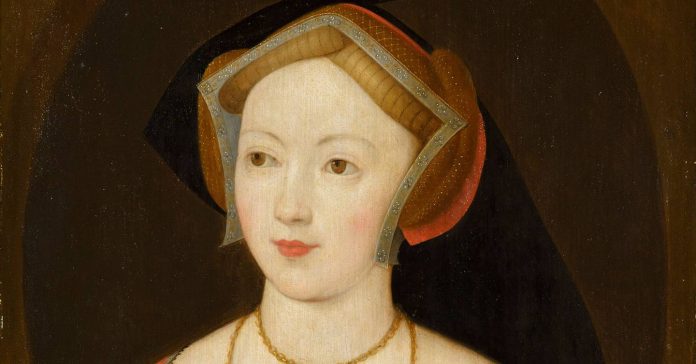 For hundreds of years, this painting from the Royal Collection was cataloged as “Portrait of the Lady,” allegedly copied from a lost painting by Hans Holbein Jr., court painter of Henry VIII. His model has now been identified as Mary Boleyn, the king’s seductive mistress and sister of his beheaded second wife, Anne.
Researchers found a strong connection with the painting’s Fourteen Beauties series, which decorated Queen Anne’s bathroom at Windsor Castle 300 years ago (Anne ruled from 1702 to 1714 and was the last member of the Stuart dynasty in the English throne). This work was separated from the others in the 19th century because it was somewhat different. Each painting in the set was painted in the 17th century and inserted into similarly gilded frames, and this one seemed odd because the model on it was depicted in a 16th-century dress. All other portraits were images of 17th-century aristocrats – the Duchess and Countess. Perhaps they were all copies of original works by Sir Antonis van Dyck and Sir Peter Lely – court painters of Charles I and Charles II – as well as miniaturist Samuel Cooper.

In the 19th century, 13 portraits were moved to the living room of Queen Victoria in Windsor, and more recently to Highgrove, the private residence of the Prince of Wales and Duchess of Cornwall. The fourteenth portrait was sent to Hampton Court, London, and in 1995 to Holyrood House, Edinburgh, where it now hangs in the bedroom of Queen Mary I of Scotland.

Scientists have now found new evidence by determining the age and origin of the tree used for the portrait. They also compared the image with other images of Mary Boleyn, including from Longford Castle and Warwick Castle. To the surprise of art historians, the wood in the portrait was the same as in one of the Fourteen Beauties set, the image of Lady Herbert (who, by the way, married the great-grandson of Mary Boleyn).

The discoveries were made by specialists from The Jordaens Van Dyck Panel Paintings Project (JVDPPP), which is based in Brussels and has the necessary equipment for conducting tests. Project co-founder Justin Davis said the results were unexpected. It turned out that six of the fourteen panels were made of the same oak tree. This tree began to grow in southwest Germany before 1393 and was cut down between 1651 and 1671. “This result in itself is a world record – six panels made of the same tree have never been seen anywhere before,” the expert said.

All 14 paintings belong to the brush Remigius van Leemput, a Flemish artist who came to London in the 1630s. He worked in Van Dyck’s studio and specialized in copying his works. According to Justin Davis, Van Lemput was an incredibly talented artist. King Charles I hung his copies in his palaces, and the painters of that era were delighted with the replicas because they became an advertisement for their skills. Van Lempuy’s works are still highly valued today because not all the originals from which they were copied have been saved.

All 14 paintings from the series were listed in the inventory of the Royal Collection in the 18th century. The work was later cataloged as a portrait of Anne Boleyn by Golbein, and by 1861 became simply “a portrait of a lady at the court of Henry VIII”. Until now, the model was considered an unknown woman in Tudor costume.

Thus, the whole series was reunited 300 years later, and one of the fourteen beauties was named.