Home News The National Museum of Women in the Arts in Washington, D.C., Has... 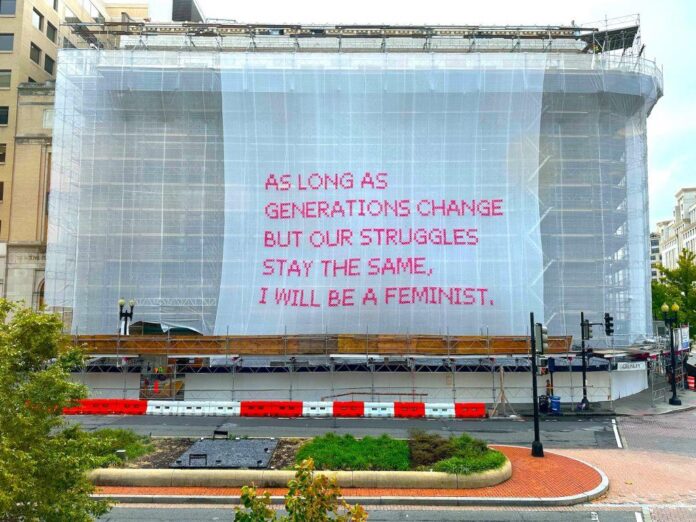 Scaffolding wraps the facade of the National Museum of Women in the Arts, whose building in downtown Washington, D.C., closed in August 2021 for a $67.5 million renovation. While the building will be shuttered until next fall, the museum is hardly idle.

On Monday, the NMWA unveiled a major textile commission by Austrian artist Katharina Cibulka. Suspended across the north face of the building is a nearly 11,000-square-foot banner with a message for Washington, spelled out in cross-stitch embroidery: AS LONG AS GENERATIONS CHANGE BUT OUR STRUGGLES STAY THE SAME, I WILL BE A FEMINIST.

The piece, the latest in Cibulka’s “SOLANGE” series—which refers to the German words for “so long as”—is her first installation for the U.S. as well as her largest to date. Rendered in pink tulle letters over a white mesh fabric that hugs the existing scaffolding, the artist’s words point to frustration felt by women in Washington and nationwide.

The obvious American context to the literal text in Cibulka’s installation is the U.S. Supreme Court’s decision in June to overturn Roe v. Wade, a watershed moment that the majority of Americans view as wrongly decided. Efforts by conservatives to enact a sweeping agenda using the judiciary have successfully dialed back rights that Americans relied on for nearly half a century. For people facing unexpected or complicated pregnancies in conservative-led states, this reversal is an unfolding crisis, one whose full weight may not be felt for years or even decades.

The court’s Dobbs decision looms large over the midterms, and Washingtonians hustling through downtown will no doubt read Cibulka’s prompt through a political lens as the November election nears. (The installation is on view through February 26.) Yet even in the District of Columbia, one of the most progressive bastions in the nation, women face a generational struggle to secure decent healthcare.

That’s because the District leads the nation in maternal mortality rates, a dubious distinction that manifests as a severe public health crisis for Black people especially. In 2019, the city of Washington had a maternal mortality rate of 36 deaths per 100,000 live births, according to the United Health Foundation. That’s not just worse than the average for the U.S. — it’s worse than the rate for Syria. Black women in D.C. bear the brunt of this crisis: In 2019, Black people who gave birth suffered 71 deaths per 100,000 births in the city.

Broad disparities in women’s reproductive health and access to care begin to explain this appalling state of affairs. These and other disparities are more like a core condition than a sudden crisis: That’s what Cibulka is telling us.

Looking beyond Cibulka’s words, the installation lines up with another infrastructure-as-art presentation across town: A painting by Swiss artist Nicolas Party graces the scaffolding over the Hirshhorn Museum and Sculpture Garden. Scrim is in.

A closer look at Cibulka’s letters also suggests a further nuance. The 3.6-feet-tall letters that the artist has cross-stitched onto this building-sized embroidery are pink but not curlicued. They’re not even serif. Her work doesn’t look like craft; it looks more like a computer readout. It’s as if she’s speaking at a cool remove from the matter at hand. This isn’t a desperate plea. This is an official notic