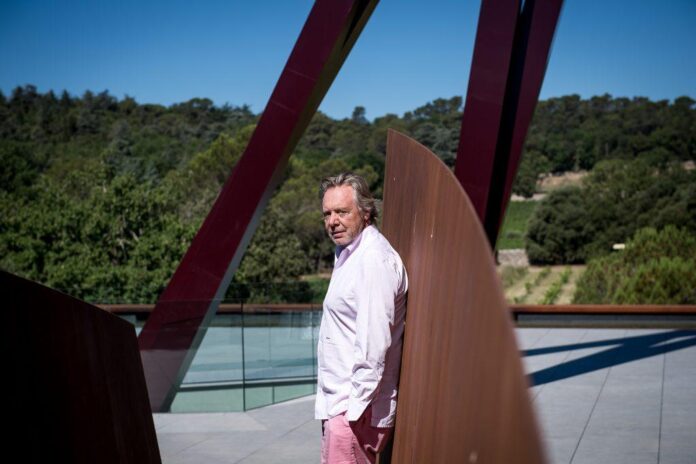 France’s art market is booming. The country generated a record $339.5 million in auction sales in the first five months of 2022. And after spending two decades and $194 million on construction, François Pinault finally opened his Bourse de Commerce museum in Paris last year. Blue-chip gallery Hauser and Wirth also announced the opening of a new space on the Champs-Élysées, just in time to welcome Art Basel’s first foray into the capital, under the name Paris+. Unhappy art-world expats also left London en masse after Brexit, giving the French capital the opportunity to grab some much-needed post-pandemic shine.

With so much on offer, art collectors still remain extremely discreet, often refusing to publicly discuss their private collections. What is holding them back? Timidity, thieves, and taxes. The first trait was most likely inherited from the country’s habit of chopping off the heads of the privileged, paving the way for the second category to steal what they might see as ill-acquired.

As for the last reason, Sharón Zoldan, founder of SZ Advisory, a Los Angeles and Luxembourg-based art consultancy, has seen how complicated the maze of French law can be, and regularly partners with tax advisors to help collectors navigate it. “We often structure art collection management for our clients residing in France, as acquisition and deaccession of artworks requires thorough analysis and extensive knowledge of tax and legal implications,” she said. “Our French collectors are generally very cautious and discretion is paramount—the country’s brutal inheritance tax can reach up to 60 percent.”

Despite these obstacles, we spoke with five top collectors living in France about what they are interested in and where they look to buy it—taxman be damned. 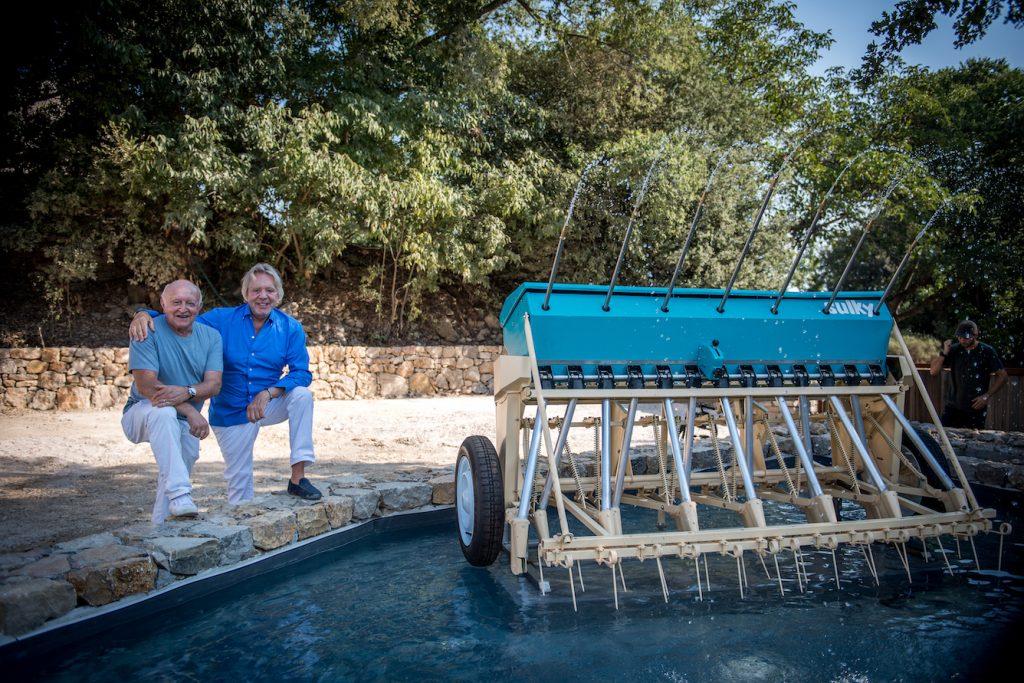 Day Job: Philippe Austruy, 73, founded the medical group SIS and Vignobles Autrsuy, a portfolio of vineyards, including La Commanderie Peyrassol in Provence—maker of some of the world’s most thirst-quenching rosés—and Quinta da Corte in Portugal. He is currently one of France’s wealthiest citizens.

Distinguishing Feature: Austruy started collecting through friends like the French sculptors Bernar Venet and César, as well as his ex-wife Valérie Bach, who owned an art gallery. He became a seasoned collector after buying Peyrassol in 2001. Works were primarily bought because of an emotional connection with an artist, until the curator Mathilde Marchand, and Lorenzo Fiaschi of Galleria Continua, stepped in to assist Austruy in shaping the collection.

Where He Shops: “I never discuss the price of a work. It’s not my job,” Austruy said. “I know what I want, and my team tells me if that is feasible or not. If I say yes, I don’t want to know the price.” Austruy doesn’t buy during gallery openings or at art fairs. “I tend to keep my distance from the art market and prefer to stumble upon something new, unnoticed.”

Fun Fact: Austruy has always stated his dislike for the high-voltage pylons dotted around the South of France, so when he commissioned Bertrand Lavier to create a new work for Peyrassol, the artist jokingly used an electrical post, which had to be planted in the heart of the sculpture garden. 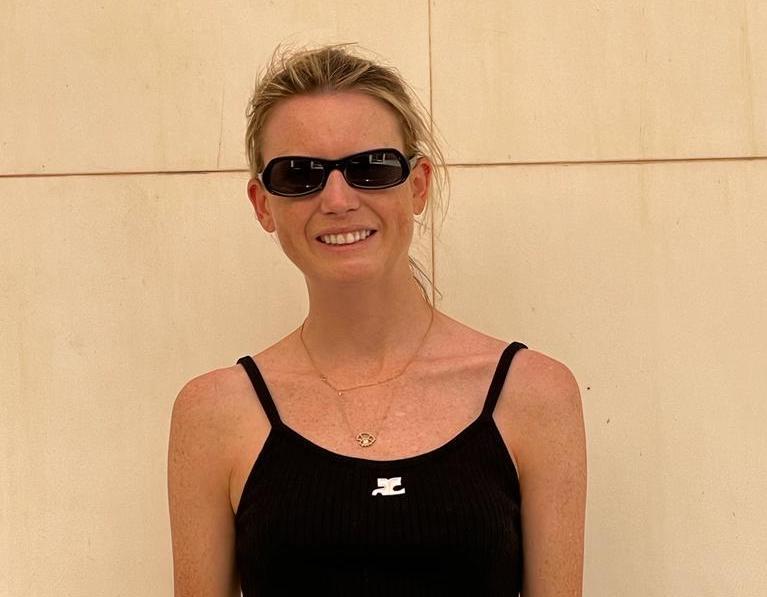 Pascaline Smets started collecting when she was 18.

Day Job: Pascaline Smets, 38, is in charge of the marketing strategy of family-owned Smets, a high-end fashion store and e-shop.

What’s in the Collection: About 80 artworks, including a mix of established and emerging artists. Smets owns pieces by Nevin Mahmoud, Brice Guilbert, Agnes Lux, and a painting from Rinus van de Velde, which she bought from Tim Van Laere gallery for a little more than $26,000. “I never know in advance where a piece will be installed,” Smets said. “I buy art for myself, even if I often ask my brother Guillaume for his opinion.” Her first purchase was a photograph by Frank Perrin.

Distinguishing Feature: Smets started collecting when she was 18 years old, helped by her grandfather, who owned works by Magritte, Jean-Michel Folon, Fernand Léger, and Ossip Zadkine. She regularly places artworks in the family’s clothing stores, such as Ocio by Ivan Navarro and La Bétonnière by Wim Delvoye. In 2015, Pascaline opened Stems gallery with her brother Guillaume, to exhibit emerging artists, with spaces in Brussels and in Paris.

Where She Shops: Fairs like Liste, NADA, Frieze, and FIAC, and galleries like Jousse Entreprise, Chantal Crousel, Perrotin, Galerie M+B, and Dépendances. “It doesn’t really matter where the work comes from. If I see something interesting, I stop, ask a lot of questions and if I like it, I buy it,” she said. “That’s why art fairs are so easy, everything is in the same place.” Smets has never bought a work from a PDF, but she does follow galleries’ programs on Instagram.

Fun Fact: Smets bought a work by Josh Sperling in 2017 from Bill Brady in Miami, for about $5,500—but she hasn’t yet procured it from the gallery’s storage. 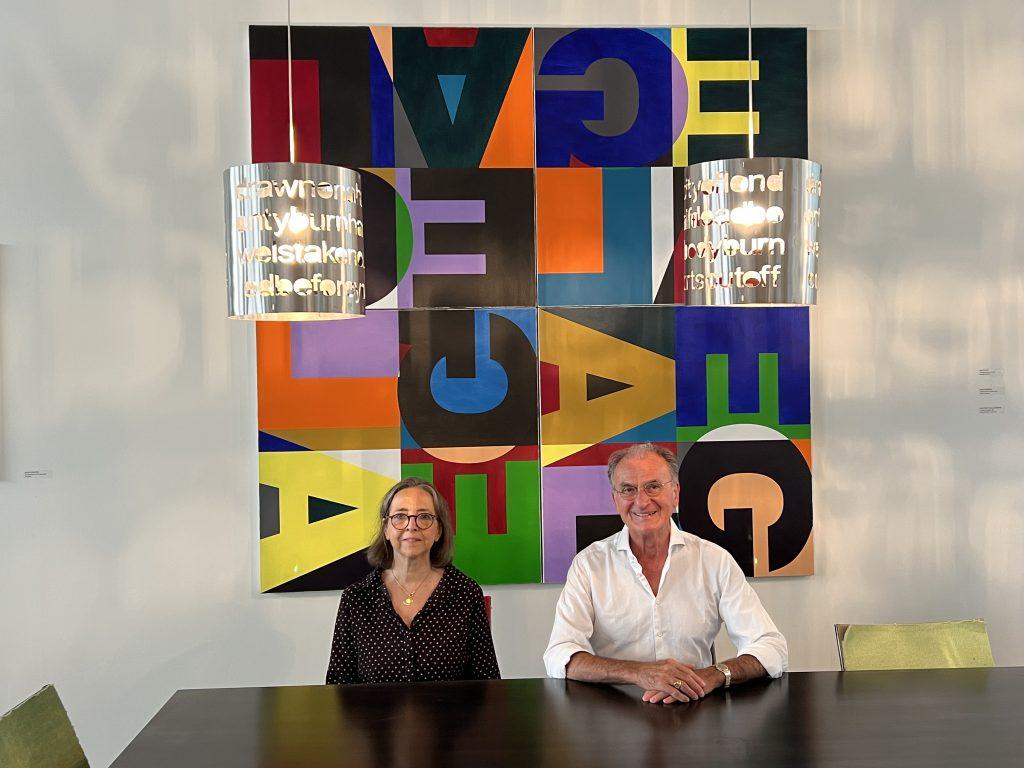 Day Jobs: Marc and Josée Gensollen are practicing psychiatrists who opened their home in Marseille as an art space called La Fabrique. They are also founding patrons of CIMAM (the International Committee for Museums and Collections of Modern Art).

What’s in the Collection: More than 600 works, including pieces by Joseph Kosuth, Tino Sehgal, Lawrence Weiner, Gilles Courtier, Dan Graham, Sol LeWitt, Carl Andre, Pierre Huyghe, Jean-Luc Moulène, Roman Ondak, and Liam Gillick. Yielding Stone by Gabriel Orozco can be seen as a symbol of their interest in memory and the process of making art.

Distinguishing Feature: As psychiatrists, the Gensollens have always been interested in the themes of language and communication. They started acquiring conceptual art in the late 1970s, informing themselves about artists through museum exhibitions, biennales, and magazines like Art Press. Their home in Marseille, La Fabrique, is open to private visits of up to three hours. “We built our collection to share our passion for art and we easily loan works to institutions,” the couple said.

Where They Shop: The galleries Karsten Grève, Mor Charpentier, GB Agency, Michel Rein, and Chantal Crousel. The couple usually refrains from going to artists’ studios “to avoid clouding our judgment,” they said. “We prefer to attend art fairs to bond with galleries that are working beyond the art market,” Marc added. They only buy what they can afford. “The collection is a mirror image of our communal effort—we never sell any works,” Josée said.

Fun Fact: The couple bought Dan Graham’s video installation Two Viewing Rooms directly from the artist after identifying a link between the work and their own interest in family therapy (where patients can be observed without being seen by the practitioner). “Dan knew about the use of the two-way mirror as a form of surveillance,” they said. “We bought the concept and had to build the actual work later on.” 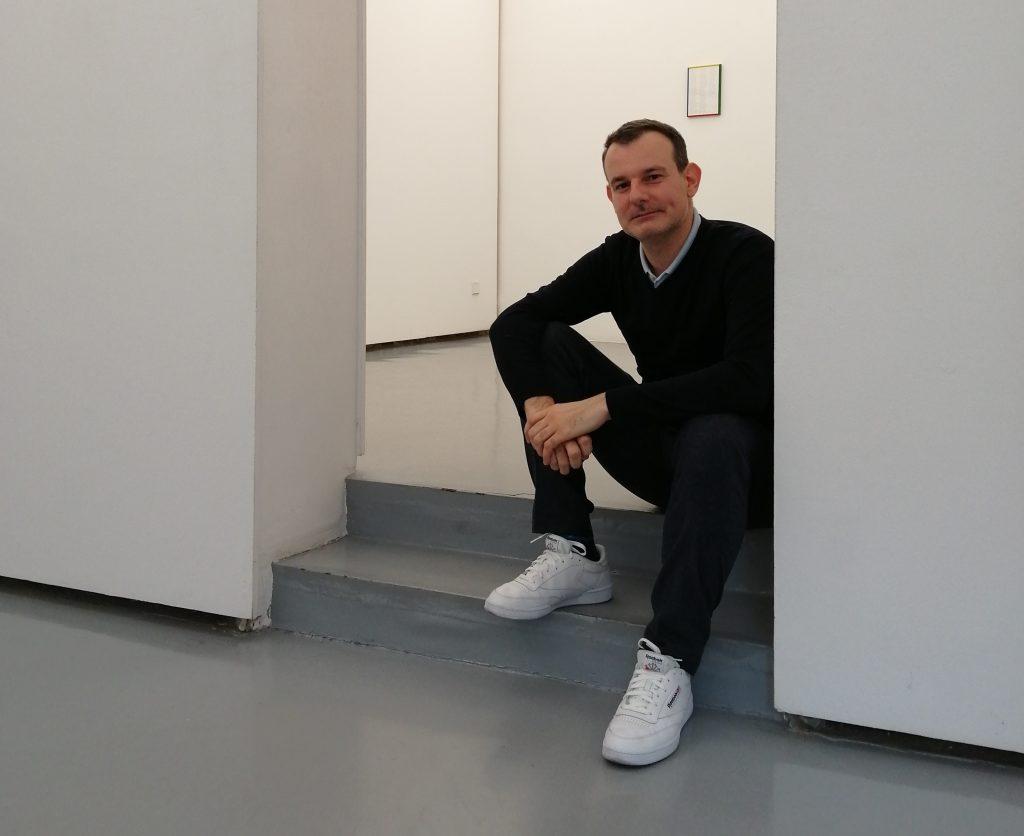 Edgard F. Grima is a screenwriter and director for television and cinema. Photo: Cristina Garrido.

Days Job: Edgard F. Grima is a screenwriter and director for television and film, including episodes of the hit Netflix show Call my Agent! He is in his late 40s.

What’s in the Collection: Grima started collecting in 2014 while visiting an artist’s studio in Vietnam, but quickly reframed his collection to focus on works dealing with the creative process and the notion of language. He has acquired more than 125 works by Ignasi Aballí (who is currently representing Spain at the Venice Biennale), Cristina Garrido, Wilfredo Prieto, Stéphanie Saadé, and Béatrice Balcou. In 2021, he expanded his collection to include painting, focusing on Japanese artists like Kazuyuki Takezaki, Yui Yaegashi, Kaoru Arima, and Shimon Minamikawa.

Distinguishing Feature: “Being a screenwriter, I am interested in how ideas are born. Conceptual art is ultimately about storytelling,” Grima said. But he never buys impulsively. “The collection is an intellectual construct that demands a lot of research. The work also has to make sense within the collection,” he added. Grima is currently looking to make his collection available to the public, so that the artists can continue to be seen, researched and enjoyed in the future.

Fun Fact: Grima started collecting after his job as a screenwriter took off. “The act of collecting for me meant supporting emerging artists,” he said. “I know what it’s like to struggle, and this is why I will always try to support an artist directly through their gallery, rather than go through the secondary market.” 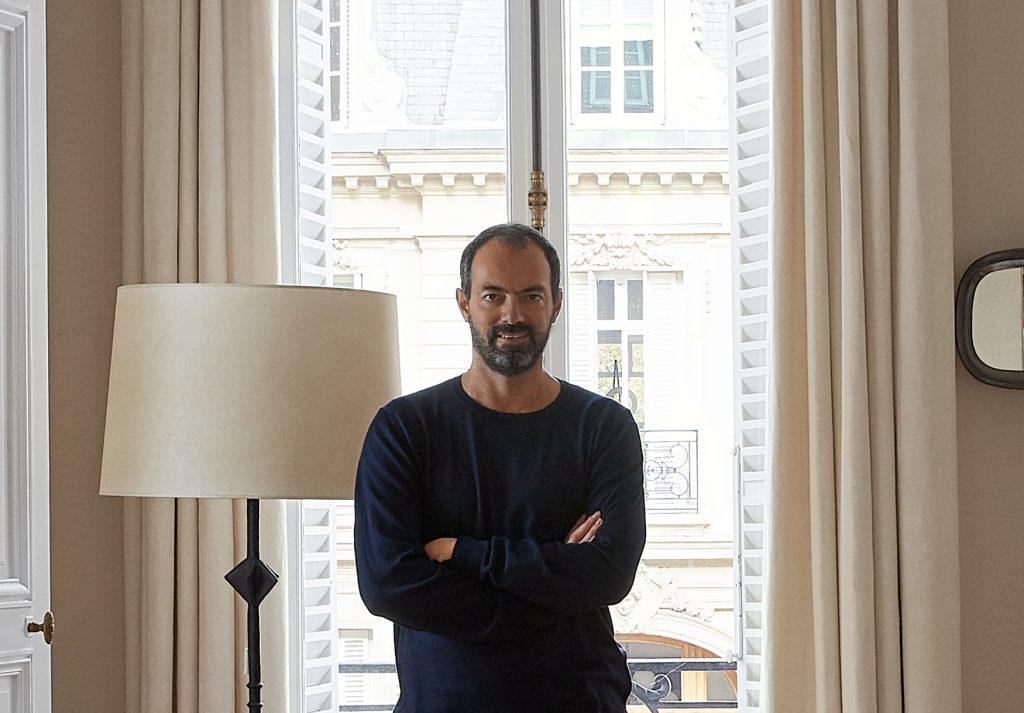 Emmanuel de Bayser is the the great-grandson of French painter George Desvallières and founder of the concept store Le Corner in Berlin.

Day Job: Emmanuel de Bayser, 49, is the founder of the concept store Le Corner in Berlin. He lives in Paris.

Distinguishing Feature: As the great-grandson of French painter George Desvallières, de Bayser grew up surrounded by Old Masters and 18th-century drawings. But it is the aesthetic of the American designers of the 1950s and ’60s—like Charles and Ray Eames and George Nelson—as well as French furniture designers, that caught his eye as a young adult. De Bayser sees himself as an assembleur, rather than a collector. “It’s about the way I pair objects together, that’s my identity,” he said.

Where He Shops: The galleries Jacques Lacoste, Jousse Entreprise, Galerie Patrick Seguin, and Galerie Laffanour are his go-to places for collectible furniture. “I always come prepared and well-informed, whether I buy a piece of furniture or an artwork. I subscribe to Artnet and closely follow auction results,” he said. He doesn’t have time to shop at art fairs, although “Drouot is always a great source of information,” he added.

Fun Fact: When he started collecting, de Bayser would wake up in the middle of the night to bid on American pieces of furniture on eBay. “I lived in Europe, so it was the only way to win the auction,” he said, “and I really wanted those pieces.”