Home News The Rubells’ New D.C. Museum Delivers on a Promise to Grow the...

On a blustery December evening, 13 years ago, Mera Rubell swept through the nation’s capital on a whirlwind tour. Over the course of 36 straight hours, the Miami art collector visited 36 artist studios in Washington, D.C., hopscotching from one neighborhood to another. It was a red-eye mission to pick contributors for a local arts auction, but also a prelude to something bigger.

Two months later, in February 2010, Mera and Don Rubell bought a former schoolhouse in southwest D.C., to build out as a hotel and satellite museum for their Miami art collection. The next year, the Rubells co-launched a D.C. art fair called (e)merge. Another property owned by the couple, the Capitol Skyline Hotel—designed by Morris Lapidus, the architect behind the Fontainebleu and other baroque Miami Beach hotels—hosted summer pool parties for the glitterati that drew throngs of proto-influencers to the area.

More than a decade later, no neighborhood in the city has changed more than this one. Southwest has built up and out, with new developments that include The Wharf and Audi Field. Those changes also include setbacks. The Randall School building sat dormant for years. The Capitol Skyline, once an anchor for the scene, has served as an emergency shelter since the start of the pandemic. 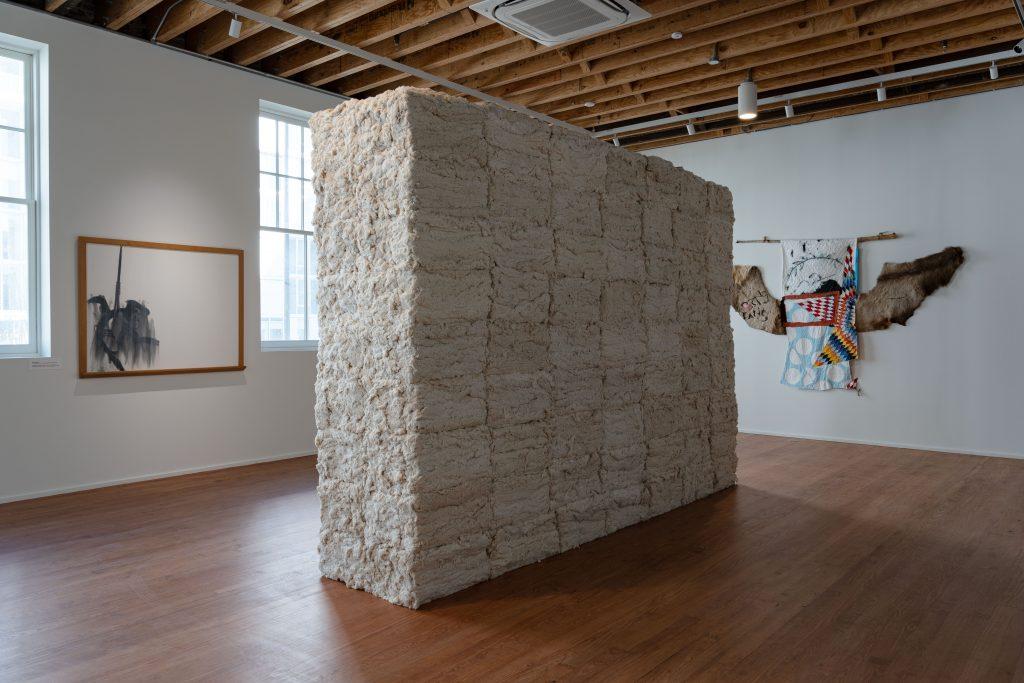 So at long last, when the Rubell Museum opened its doors in D.C. on Thursday night, with a ribbon-cutting by the mayor, the collectors made good on their investment. What started in 2010 as a foothold in a not-yet-gentrifying part of the city—and served as a placeholder over years of uncertainty—feels in 2022 like a promise made and kept.

The new museum at 65 Eye Street SW showcases nearly 200 works from the Rubell’s collection, most by artists that the public won’t find elsewhere in the city. The former Randall School building and one-time homeless shelter was transformed by local designers Beyer Blinder Belle Architects into a brightly lit space featuring two-dozen galleries. At 32,000 square feet, the museum is both intimate and accessible, and as an institution it feels more public than private. (And for local residents, entrance is free.)

The opening installation at the new Rubell Museum features a selection of works attuned to the city. That starts with a searing tribute by Keith Haring to Don Rubell’s brother, Steve Rubell, the Studio 54 impresario who died due to AIDS in 1989. Haring composed these 20 drawings, Untitled (Against All Odds), on a single day in 1989, while listening to What’s Going On?, the 1971 statement album by Marvin Gaye—a Washington native and alum of the public school now occupied by the Rubell Museum.

Gaye is one of the city’s favorite sons and his legend is part of the city’s official narrative. The Rubell Museum’s inaugural exhibit, “What’s Going On,” gives credit where it’s due. Yet the show dives even deeper into local lore. 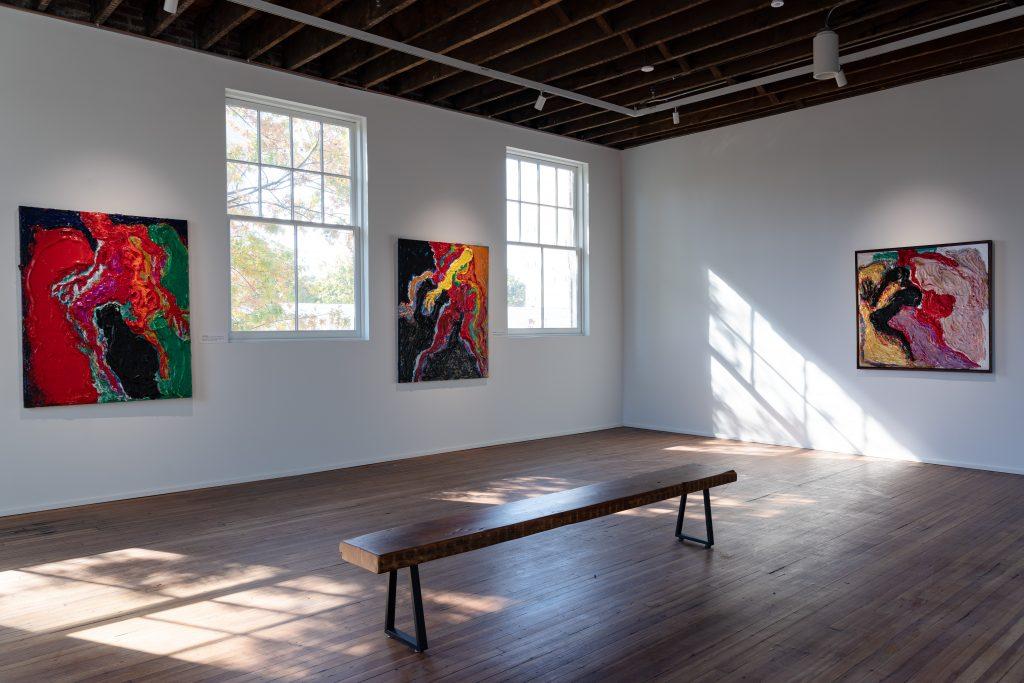 One of the museum’s highlights is a suite of works by Sylvia Snowden, a longtime Washington artist and former Howard University instructor. A 1985 painting by the artist can be seen at the National Gallery of Art, but a solo showcase like this—assembling several of her rich, dark, textured, impasto abstractions—hasn’t happened in the city since the early 1990s. Her inclusion here complicates the story of the Washington Color School, the formalist abstract tradition that dominates any discussion of local art history. By elevating Snowden, the museum has instantly delivered one of the city’s must-see art rooms.

Other selections feel like quiet but necessary corrections to the capital city’s cultural treasury. The Rubell Museum display, for example, includes portraits of trans and LGBT subjects by Catherine Opie. While she is undeniably one of America’s greatest portrait artists, her representation in D.C. collections is limited to her photos from President Barack Obama’s first inauguration. The narrow corner hallway at the Rubell that features her portraits makes her absence from the National Portrait Gallery collection look glaring.

Works on view that don’t have any explicit context in Washington, positive or negative, still show what the Rubell Museum can contribute. February James (a D.C. native who works in Los Angeles) and Christina Quarles (another Angeleno) are working at the forefront of popular new figurative traditions. A harrowing painting about abortion by St. Louis-born artist Juanita McNeely, who is 86, joined the Whitney Museum of Art collection in September; her electrifying polyptych Woman’s Psyche (1968) just showed at New York’s Independent Art Fair and now hangs in D.C. The collectors obviously have their finger on the pulse. 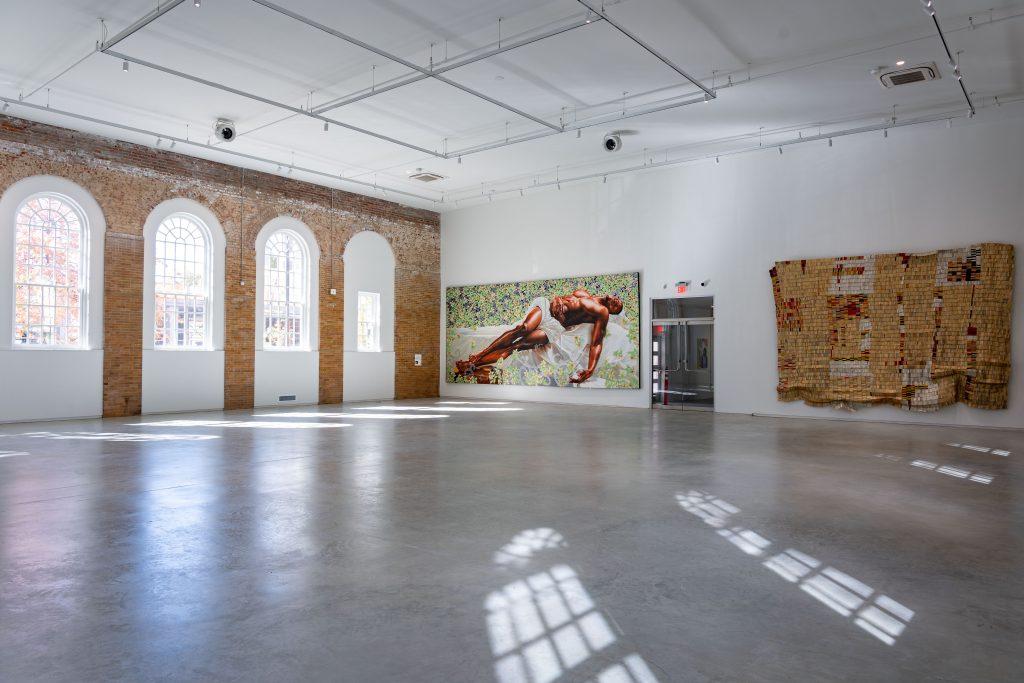 Installation view of the inaugural show, “What’s Going On,” with works by Kehinde Wiley and El Anatsui. Photo: Chi Lam.

Longtime residents might recognize Kehinde Wiley’s massive Sleep (2008) from “30 Americans,” an important exhibit of works by African American artists from the Rubell Collection that stopped at the Corcoran Gallery of Art in 2011. However improbably, Wiley’s painting gets swallowed by the new museum atrium. But between Sleep and a golden bottle-cap installation by El Anatsui, this central foyer is destined to become a favorite for locals—even given the stark and quite moving tribute to Covid-19 victims by Christopher Myers on the opposite wall.

Many of the artists highlighted in “30 Americans” can be seen at the Rubell D.C., among them Mickalene Thomas, Kara Walker and Hank Willis Thomas. Something like the spirit of that exhibition motivates “What’s Going On,” which was organized by the Rubells alongside Miami director Juan Valadez and new D.C. director Caitlin Berry.

Identity could be the organizing theme for the opening. A show that reflects the city’s progressive population isn’t exactly rare in D.C., which has seen important (and at times controversial) exhibits on immigration, diasporas and gender and sexuality. But it rarely happens at the scale of an entire museum.

Washington doesn’t suffer for art museums, of course. Some of them cater to locals: The Hirshhorn Museum and Sculpture Garden recently highlighted new works by the late Sam Gilliam, and the National Gallery’s East Building has a room dedicated to the Washington Color School. Glenstone, the contemporary art retreat in Potomac, Maryland, opened a major expansion in 2018 — and a chapel to Richard Serra more recently — but as an institution it’s not especially geared toward Washingtonians. 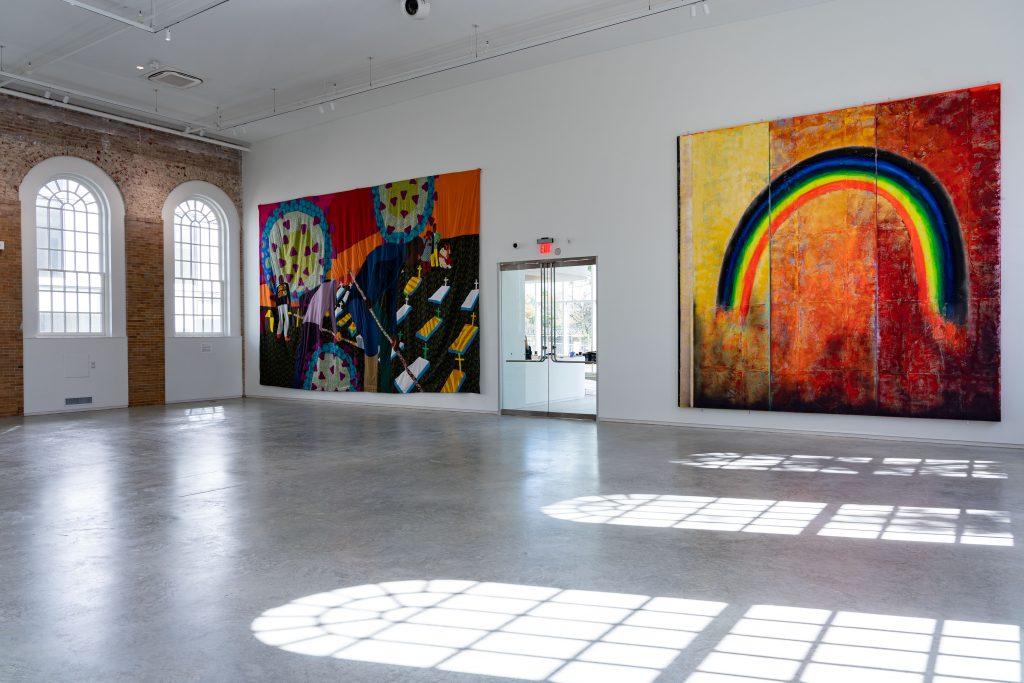 Installation view of the inaugural show, “What’s Going On,” with works by Christopher Myers and Vaughn Spann. Photo: Chi Lam.

None of them, however, is doing what the Rubell Museum means to do, especially if the collectors go through with plans to open a D.C. branch for its notable artist-in-residency program, which launched in Miami in 2011. Hany Hassan, a partner at architecture firm Beyer Blinder Belle, hinted in December that the museum would include some kind of live artist working space; the museum would not confirm the details.

As it stands, the District hasn’t had an institution like the Rubell Museum in years, one that’s literally and figuratively oriented toward the city, not the National Mall. The next best example might be the former Corcoran museum, which dissolved in 2014 after trustees led it astray. The Rubells bought the Randall School building from the Corcoran, which had aimed to bring art from the city’s monumental core to one of its neighborhoods. Now that pledge is finally fulfilled.

The Queen’s image: how portrayals of Elizabeth II changed over her lifetime