Home News The works that have marked the History of art 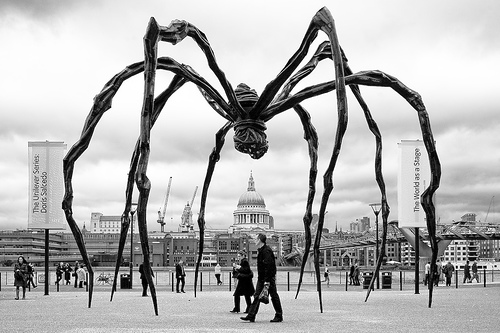 What works have left a mark on the history of modern art? Moving away from classic historical works of art, these revolutions opened up new fields and infinite freedom.

Duchamp marked the birth of the artistic gesture with a work of art. The gesture is anti-aesthetic, but he focused on the concept: it is the concept of “ready made” that classifies the object as a work of art here.

Le Dejeuner sur l’Herbe is known as an anti-Raphael painting. Manet shocked the public mainly due to three details. First of all, the naked woman surrounded by two men. Second, the elimination of the divine: the gods have disappeared and the personages are casted out of heaven. The third element, too avant-garde and scandalous for the period: the model has a provoking look which enhances her position of inspiring muse.

In his « pink period », Picasso did one of the most radical historical works of art. He treated the faces of these women like a formal object, which allowed him to treat each element of the representation as an element of art in itself.

Using screen printing, the artist created a disturbing portrait of Marilyn. This face has spread through visual culture, while denying its individuality. Andy Warhol created this one of his historical works of art soon after the suicide of the actress.

Clad in gold plating, the oldest bridge in Paris has regained its image, evoking new attitudes from passers-by who no longer looked up. The installation is an example of aesthetic, technical and political courage. A piece of art unprotected by the law, since justice affirms that a dematerialized concept (in this case, that of covering a monument) cannot be protected by the law, only the sensible part is protected in this case.

Proclaimed the leader of land art, Robert Smithson is anti-Duchamp. His historical works of art are the opposite of mass-produced objects, rather than disappearing with time. The work has become a dystopia. The artist died in a helicopter crash while trying to see his work of art.

Maman, or big spider, is autobiographical and pays homage to her mother, Josephine Bourgeois, a former tapestry repairer who worked in her husband’s textile restoration workshop in Paris. As a child, Louise Bourgeois watched the thread patterns her mother made while weaving. Maman (mother) weaving is a metaphor for spinning, caring and maternal shelter.

Surviving for $58 million is a luxury these dogs of steel can afford. With his simple balloons, Jeff Koons, creator or marketing ace, remains the most expensive artist in the world. His metal historical works of art are key works that marked the recent history of the art market.

The dirty corner, also called the queen’s vagina, was displayed in the royal gardens of the Château de Versailles in the spring of 2015 during the Kapoor exhibition at Versailles. The confrontation between the sacred and sex, harmony and ugliness, nature and steel is a reflection of two opposite eras, hence two visions.

Street artist JR has pulled off a stunt at the world’s biggest museum. The Louvre pyramid disappeared after an anamorphosis (optical illusion) in May 2016. The optical illusion excited the public and became one of the main historical works of art, as it is a mixture of two conflicting eras: the digital age (photoshop) and the middle ages (Sally’s facade).

Yayoi Kusama, a true iconoclastic personality. She elevated her two-color dots to the rank of a star system. Creators like Louis Vuitton has taken over her leitmotiv. Her obsession for dots obsess us by absorbing our body in her immersive work with a proliferation of mirrors.