Home News ‘This market will not turn quickly’: Christie’s, confident amid fears of a... 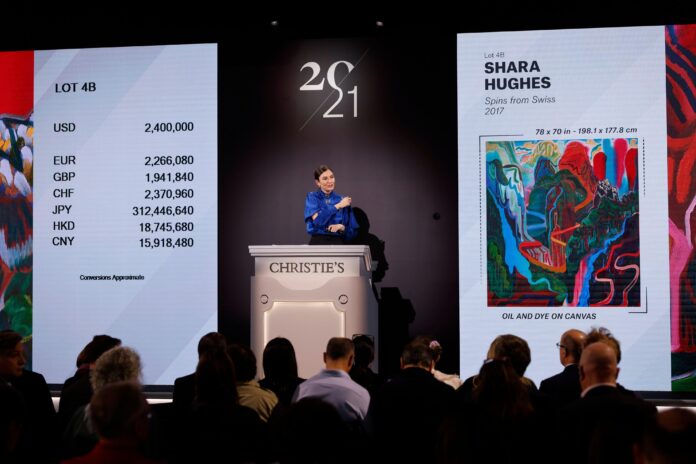 If there was one term that dominated the conversation around Christie’s announcement of the sales figures for the first half of 2022 on Tuesday (12 July), it was “business model”. From the beginning of the Covid-19 pandemic, specialists and executives said, the auction house did its best to not only make the already established collecting class feel comfortable buying art online, but to help them understand that they could spend money on work from any era of art history. The house dissolved the barrier between 20th and 21st century art with its new sales formats and proselytised the millennial generation, that young, monied class who may start their collecting lives with Rolexes and Bored Apes, but may soon be bidding on works by Gerhard Richter, Anna Wyant and Issy Wood.

Global sales at Christie’s have been “remarkably strong”, according to the auction house’s chief executive Guillaume Cerutti, driven in large part by billboard-worthy single owner sales like the collections of Anne Bass and Thomas and Doris Ammann in New York—the latter of which included Andy Warhol’s record-smashing Shot Sage Blue Marilyn (1964), which brought $195m (with fees) in May—and the Givenchy collection in Paris.

The auction house reported $4.1bn in total sales in the first six months of 2022, an 18% bump from last year’s $3.5bn take during the same time, especially given rising worldwide uncertainty brought on by Russia’s war in Ukraine and concerns about inflation and a possible recession. The star of this first half of the year was Warhol’s Shot Sage Blue Marilyn, which secured the title of the world’s most expensive 20th-century work to be sold at auction and the most expensive American artwork ever sold at auctino.

Another notable figure is 87%, the auction house’s sell-through rate so far in 2022. And while private sales were down from the same period last year and “the economic outlook is not great, there is uncertainty”, Cerrutti says “the demand is very strong, and we do not see that changing in the coming months”. He adds that, “Without being too optimistic, because we are aware of the political and macroeconomic environment, we see a very resilient art market.”

Without a doubt, the beginnings of a return to normalcy helped. For the first time since the onset of the pandemic, Christie’s this year has been hosting auctions in hybrid livestreamed and in-person formats, and events for collectors and the general public have drawn old and new visitors to preview exhibitions.

“There is one observation we can’t avoid: the pace at which the art market has evolved in the last 24 months,” says Adrien Meyer, Christie’s co-chairman of Impressionist and Modern art, noting the ease of bidding on works at the auction house that was a direct result of the technological innovations brought about by the pandemic.

Meyer adds that, before Covid-19, around 10,000 to 15,000 clients would watch the firm’s auctions online; that number of viewers has jumped to between 800,000 and 1.2m people who are at least following—and potentially bidding—on each sale. Pre-pandemic, he adds, around 10% to 15% of buyers in a given auction were new to Christie’s; now, the average is above 25%. This new breadth and new blood might be what helps Christie’s and the wider art market, stay afloat if the feared recession materialises.

The firm’s new business model seems to rely heavily—and thus far successfully—on younger collectors. “There is a very strong appetite for art and culture among millennial collectors, and they’re also very eager to share that—they’re very active on social media,” says global managing director of private sales Anthea Peers. “They want to be part of the fabric of the art market—they want to be genuinely in front of the art and discussing art.”