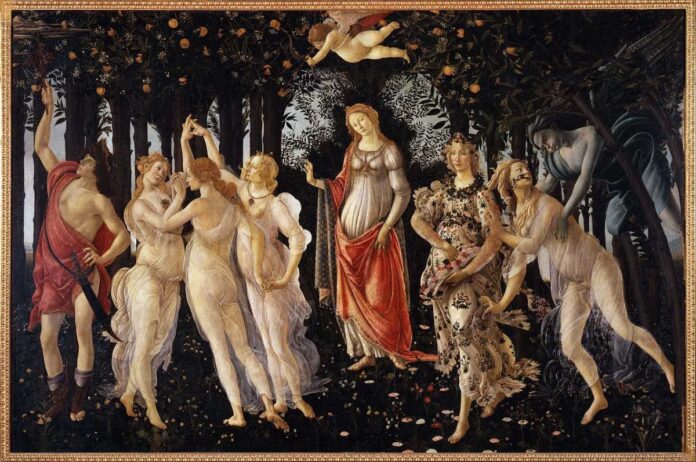 The Renaissance in painting is a unique art with no analogs anymore. We have collected for you 5 legendary Renaissance paintings. Their popularity has not faded for hundreds of years.

The birth of Venus by Botticelli

Legends have been made about the beauty of Venus for centuries. She has long been a symbol of love and femininity. The plot of this famous Renaissance painting is based on the myth of how the goddess of love was born from the sea foam.

For Renaissance artists, naked Venus, as opposed to dressed, symbolizes love. Botticelli endowed his heroine with that innocence, which is revered as the highest virtue. Therefore, there is a motif of worship in Renaissance painting. The beautiful face of the heroine resembles the faces of the Madonnas in the paintings of Botticelli. And therefore, in this work, through the ancient theme, Christian sounds. The combination of old humanism and Christianity gave rise to the phenomenon of the Italian Renaissance.

This famous Renaissance painting is one of four known female portraits by Leonardo. This canvas has suffered quite a lot from numerous restorations and repairs. After research carried out by modern methods, it was found that under the current image there are several more belonging to the brush of Leonardo.

Presumably, the Renaissance painting depicts one of the mistresses of the Duke of Sforza, Cecilia Gallerani, but there is no exact documentary evidence of this fact. This painting is one of the most beautiful female portraits.

The heyday of Sandro Botticelli’s painting came at a time when he became close to the group of humanists – poets, writers, philosophers, and artists – at the Medici court. Lorenzo the Magnificent, ruler of Florence, wrote poetry and patronized the arts.

For the villa of his cousin Lorenzo di Pierfrancesco Medici, this famous Renaissance painting with complex philosophical and poetic content was commissioned. This work, in which a variety of motifs converged, marked an important turn towards painting, not subject to any canons.

This is the most famous of the frescoes of the genius of the Renaissance. The famous Renaissance is located in the Sistine Chapel – one of the oldest temples in the Vatican and is a vivid example of Renaissance art. As the name implies, the work illustrates one of the biblical stories.

The Sistine Chapel is an excellent collection of works by the great Renaissance artist, but some of his frescoes have been lost over time. No wonder: more than five hundred years have passed.

Michelangelo was a perfectionist and destroyed works he thought were not perfect. Before his death, he burned most of his sketches – he did not want people to see the torment in which a completed masterpiece is born.

“Venus of Urbino” (1538) is one of the most famous masterpieces of Titian. The famous Renaissance paintingsis kept in the Uffizi Gallery, Florence. The painting was painted by Titian as a wedding offering for Guidobaldo della Rovere, Duke of Urbino.

For the young Guidobaldo, for political reasons, Giulia Varano was chosen as the bride, at the time of the creation of the picture – a 10-year-old girl. “Venus of Urbino” was a wedding gift in anticipation of Julia growing up and loving feelings for her husband getting stronger in her.