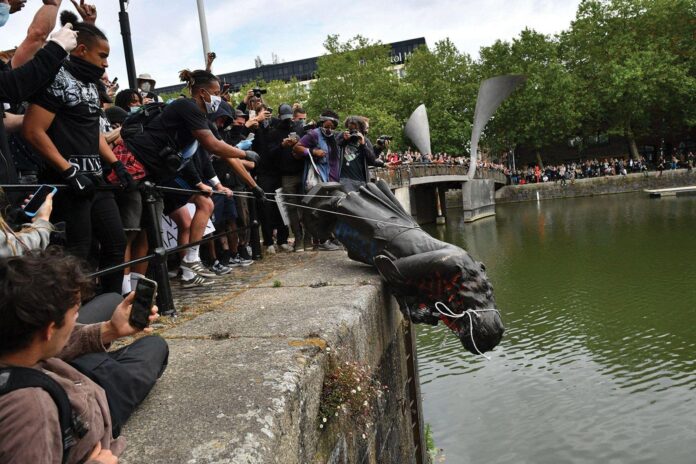 The saga of the Edward Colston statue, felled during a Black Lives Matter protest in June 2020, continues to rumble on after the UK appeal court ruled earlier this week that the toppling of the slave trader effigy was a “violent” act. The ruling also stated that the act was not protected by the European Convention on Human Rights, an international treaty signed by the UK.

In January, four protestors were found not guilty of causing criminal damage after removing the statue and dumping it in Bristol harbour. The sculpture was toppled following the murder of George Floyd by the ex-Minneapolis police officer Derek Chauvin in May 2020. The Art Newspaper understands that the court decision does not affect the “not guilty” verdicts.

The former Attorney General Suella Braverman, now the Home Secretary, referred the case to the UK court of appeal after some Conservative MPs criticised the acquittal of the four protestors. She said on Twitter that in April she referred the Colston statue for clarification of the law relating to criminal damage and protest rights. “My reference was successful on all counts,” she said.

The 18ft bronze statue long divided opinion in Bristol. Colston was an official of the Royal African Company, which dominated the West African slave trade, transporting around 80,000 men, women and children from Africa to the Americas. The slaver, who also cultivated a reputation as a philanthropist, died in 1721 though the statue of him, by John Cassidy, was erected in 1895.

Rhian Graham was accused alongside Milo Ponsford, Sage Willoughby and “others unknown” of helping to tie ropes around the statue’s neck that were used to pull it to the ground. Jake Skuse was accused of rolling the statue to Bristol Harbour. The four pleaded not guilty to the charges during the trial at Bristol Crown Court which began late last year.

The appeal court judges said in a summary: “Pulling this heavy bronze statue to the ground required it to be climbed, ropes attached to it and then the use of a good deal of force to bring it crashing to the ground… The circumstances in which the statue was damaged did not involve peaceful protest. The toppling of the statue was violent.” Crucially, they added: “The court has concluded that the prosecution was correct in its submission that the conduct fell outside the protection of the [European Convention of Human Rights].”

Graham told The Guardian: “It was the cathartic removal of a memorial to an oppressor of people and an abuser of power who had too long loomed over the people of Bristol. The fact that it is gone is still right for Bristol.”

Steven Cammiss, an associate professor at Birmingham Law School, sat through the entire ten-day trial along with two other academics. Their report on The Conversation website states that one of the key defence arguments centred on preventing the crime of public indecency.