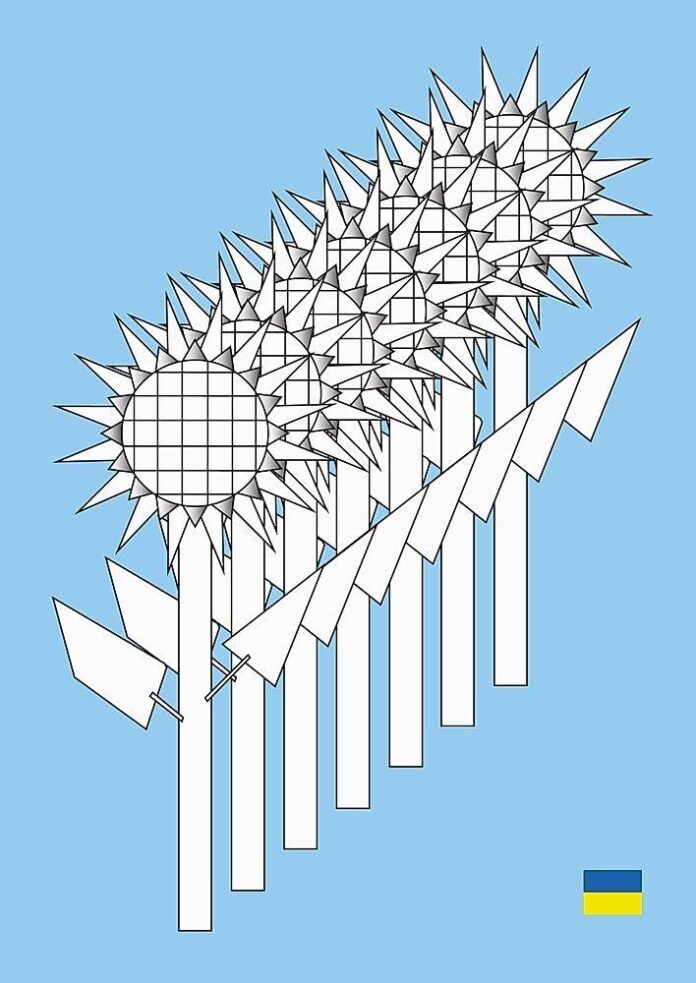 Posters are a key medium for artists in Ukraine determined to reflect the war effort. Sunseed Art— sunflowers are a symbol of Ukrainian resistance and resilience—is an important platform for Ukrainian artists who have been creating posters since the first days of the war in February, according to a statement on its website. “Ukrainian graphic artists started to use their own art in order to convey the Ukrainian vision of the tragic and cruel events that happened and are happening,” the company says in a statement.

The platform, founded by the artist and curator Olesya Drashkaba and investor Nataliya Popovych, was launched earlier this year with an exhibition at Ukraine’s Ministry of Foreign Affairs. The site features images that can be downloaded and printed by ten artists priced at €70 each.

Ten percent of the profits go to the Armed Forces of Ukraine, the Come Back Alive foundation in aid of the military, or Voices of Children which provides psychological support to children living through war. “50% will go towards supporting Ukrainian artists. 40% will keep this project running,” says the company. The striking images include Madonna by Anastasia Krasilnikova and Cheers by Oleh Hryschchenko who says that “during the first days of Russia’s full-scale invasion ordinary Ukrainians had no guns yet they met occupiers with a Molotov cocktail [depicted in the image]”.

“Freedom has always been the most important idea of Ukraine, and the Ukrainian poster has always been part of the cultural resistance of Ukrainians,” Sunseed Art adds in its statement. “[The Ukrainian artists] Yuriy Narbut, Vasyl Krychevskyi, and Nil Khasevych created symbols and powerful images of the Ukrainian struggle in their posters and graphics a hundred years ago. For example, Nil Khasevych, who could not fight due to his limited physical capabilities, wrote: ‘I cannot fight with weapons. But I fight with a cutter and a chisel. I want the world to know that the liberation struggle continues, that Ukrainians are fighting.’”

Ukrainian posters were also an important part of the Maidan Revolution, a 2014 uprising against the Russian-backed President, Viktor Yanukovych when many Ukrainian graphic artists created messages illustrating the will of Ukrainians to choose an alternative government.

An Art Teacher Stashed Some Drawings by Famed Artist L.S. Lowry in a Cupboard Years Ago. Now They Could Fetch $60,000 at Auction