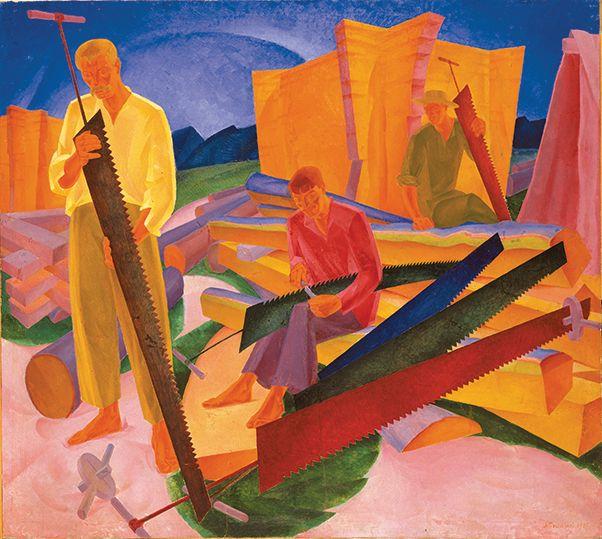 An exhibition of Ukrainian Modernist works opening next week at the Museo Nacional Thyssen-Bornemisza in Madrid has been organised in record time, and under trying conditions, following Russia’s full-scale invasion of Ukraine in February.

In the Eye of the Storm: Modernism in Ukraine, 1900-30s includes 51 works—around 75% of the show—that have been loaned from the National Art Museum of Ukraine (Namu) and the State Museum of Theater, Music and Cinema of Ukraine, both in Kyiv. To get to the show, the works were secretly packed into trucks and transported to Madrid on 15 November, which become one of the worst days of bombing in the Ukrainian capital since the beginning of the war. This is the largest-ever legal transfer of art from a war-torn country.

Incorporating artistic movements from Futurism to Constructivism, the show will chart the development of the Ukrainian Modernist period amid various political shifts, including the First World War and the creation of the Ukrainian Soviet Socialist Republic. Many of the artists in the show were killed during the repression of Stalinism, while their histories were obscured internationally for decades by auction houses and museums using the overarching and misleading label of ‘Russian’.

“All these ideas returned to me on the first day of the war,” says Konstantin Akinsha, the show’s co-curator. He had previously tried to organise a similar show in Hungary to follow up on a Ukrainian contemporary art exhibition he worked on there but insurance difficulties due to the regime’s stance on Ukraine prevented that. “We really wanted to take these works out [of Ukraine]—not only to show them to the European public but to keep them safe.”

He has co-curated the show with Olena Kashuba-Volvach, Namu’s head of 19th- and 20th-century art, who says the “exhibition is an opportunity to get acquainted for the first time with many new, extremely bright and talented artists whose works reflect the multidimensionality and variety of trends of Ukrainian Modernism.”

The Thyssen-Bornemisza is already home to works by the Ukrainian poet and artist David Burliuk and the painter and designer Alexandra Exter, a key figure of the Russian avant-garde and early 20th-century Kyiv. Akinsha says that Francesca Thyssen-Bornemisza, the prominent art collector and daughter of the museum’s founder, was instrumental in arranging for the exhibition to be shown there. She is also one of the co-founders of the Museums for Ukraine initiative, which set out to help institutions keep their works safe.

“It is becoming clearer day by day that Putin’s war against Ukraine is not only about stealing territory but it is also about controlling the nation’s narrative and its cultural heritage,” Thyssen-Bornemisza said in a statement. “This exhibition aims to recover the history of modernism in Ukraine and return it into the context of the development of both the national culture of Ukraine and of European art of the first half of the 20th century.”

Museums for Ukraine will use the exhibition’s opening on 28 November as the site for a symposium, during which a call for a European cultural deal for Ukraine will be made. In attendance will be Princess Laurentien of the Netherlands, the president of the European Cultural Foundation.

The exhibition will include world-famous names with connections to Ukraine. Among these are Kazimir Malevich and Sonia Delaunay, who were both born there, and the Russian artist El Lissitzky, who was part of the secular socialist Jewish organisation Kultur Lige, which was founded in Kyiv in 1918 during the short-lived Ukrainian People’s Republic. The show will also feature works by the increasingly prominent Ukrainian avant-garde theoretician, Oleksandr Bohomazov, from Namu and the collection of the Swiss publisher Michael Ringier, who purchased them from James Butterwick, a British dealer and a long-time champion of the artist.

Most importantly, the show will highlight artists who were forgotten or are unknown in the West, such as the painter Mykhailo Boichuk, the painter and designer Anatol Petrytskyi (a medal winner at the 1930 Venice Biennale), and Victor Palmov, who exhibited in the US in the 1920s.

Akinsha, Kashuba-Volvach and Katia Denysova, a PhD student at the Courtauld in London, have produced a book to accompany the show, featuring many more works, to be published by Thames & Hudson this month.

The works will be on display in Madrid until April 2023, before the exhibition travels on to Cologne’s Museum Ludwig.

‘Don’t expect us to be passive in the face of restitution’: British Museum chair defies return of looted artefacts