Home News Venice Biennale 2022: the must-see pavilions in the Arsenale 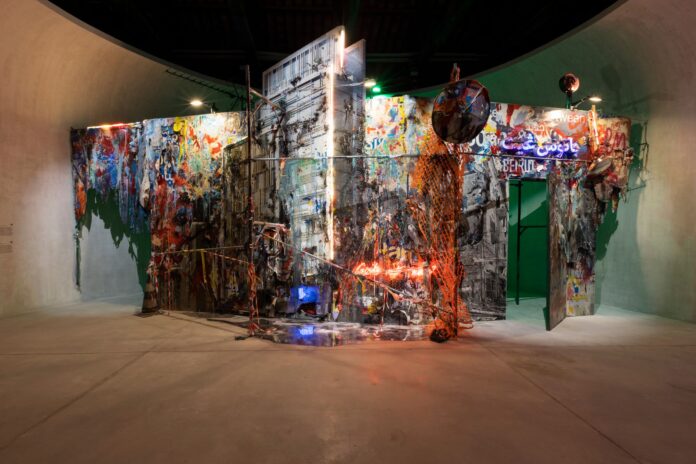 The World in the Image of Man, Danielle Arbid and Ayman Baalbaki

The installations on show in the Lebanese Pavilion reflect the never-ending chaos afflicting the Middle Eastern country, which has collapsed both economically and politically. Arbid’s split-screen video, Allô Chérie (2022), is stopping visitors to the Arsenale in their tracks—what is this sinister car chase around Beirut and why is the woman who narrates the piece constantly chasing down money? “The voice in the film is my mother’s,” Arbid tells The Art Newspaper. “I installed a spying machine in her mobile phone with her consent. I thought she had a very quiet life but then discovered she had a secret and was running her own banking system.”

The frenzied, desperate audio recording was made three years ago but the video piece was put together this year, gaining significance following the huge explosion in the port of Beirut in August 2020, which left more than 200 people dead. “Lebanon has so many money problems,” Arbid says. Baalbaki’s two-sided installation, Janus Gate (2021), reinforces the idea of a fragmented city; one side is covered in alluring neon lights and spray-painted tarpaulins while a disconcerting hut filled with detritus sits behind the tawdry façade, illustrating eloquently and forcefully the “two faces” of Beirut.

What is it like to be lowered into the depths of a peat bog? The Chilean Pavilion recreates the journey as visitors are led onto a circular platform surrounded by a translucent screen onto which is projected footage of the descent into the squelchy belly of a peat bog.

All around is live wet moss, the smell of which hits you even before you enter the pavilion. A soundtrack makes the floor tremble as tribal chants, guttural noises and high-pitched whoops fill the air. As you re-emerge into the daylight, figures dance a ring around you.

But all this theatre has a serious point—understanding and, more importantly, conserving peat bogs is essential if we are to successfully mitigate rising CO2 emissions caused by human activities. According to the presentation’s organisers, peat bogs “absorb more carbon than forests, a capability that makes these wetlands one of the most valuable ecosystems on the planet”.

These lands, in this case situated on the southern tip of South America in Patagonia, are also of cultural importance. Here they have been home to the indigenous Selk’nam people for eight millennia. And they will need to continue to exist if we are to have any hope of human existence on this planet for many more millennia. (For more about peat bogs and Selk’nam culture, visit the pavilion’s fascinating website.)

Herbert Rodriguez was once a studious fine art student at the Pontificia Universidad Católica in Lima, Peru. But, at the age of 21, he quit and disappeared into the shadows of the Subterráneos. Throughout the 1980s, the young artist made the underground of Lima his gallery, working amidst new collectives like Artistas Visuales Asociados and the Las Bestias group.

The work on show in Venice responds to the realities of Peru’s new democracy, one born from the ashes of a 12-year junta rule. The title of the exhibition, Peace is a Corrosive Promise, reflects the authoritarianism, terrorism and unrelenting violence that often defined Peru’s early attempts at democracy, as warring factions battled for power and supremacy.

Rodriguez is the sole representative of Peru in its pavilion, and this is one of the first times the artist has been significantly recognised by the established Western art world. But this is not fine art, it’s punk. Rodriguez has always remained disinterested in the gallery system. His work is fungible and raw; throwaway agit-prop made for the street. The work on show in Venice is printed on cheap, mass-produced paper; as it was in Lima in the 1980s.

But the intent is clear. One work repurposes text from an Amnesty International report, dating to October 1983, which detailed torture, disappearances and executions in the Peruvian capital. Rodriguez transforms the dry, technical text into a loud graphic animation.

With wit and verve, Yuki Kihara reworks the problematic Polynesian paintings of Paul Gauguin to centre members of Samoa’s “third gender” community, the Fa’afafine, including herself. A culturally recognised group in Samoan society for generations, Fa’afafine are people who were assigned male at birth but who express their gender in a feminine way.

When Kihara first saw Gauguin’s paintings at the Metropolitan Museum of Art in New York in 2008, she was struck by the resemblance between the semi-nude Tahitian women he depicted and her Fa’afafine friends. Revisionist research by the Maori scholar Ngahuia Te Awekotuku has even suggested that Gauguin’s models were Mahu, members of Tahiti’s “third gender”.

Meanwhile, Kihara literally confronts Gauguin head on in a video that imagines a conversation between the 19th century painter—Kihara transformed herself via prosthetics and a fake moustache—and her actual self as an empowered Fa’afafine and artist. Rather than rejecting his work out of hand, she informs him that she is merely “upcycling” the paintings into “something far more fabulous”.

Entering the Maltese Pavilion is a little like coming upon the final moments of a biblical storm of fire and brimstone. Drips of actual molten steel drop down into seven square water tanks, each representing the figures in Caravaggio’s The Beheading of St John the Baptist (1608). A complex system is hidden in the installation’s ceiling, feeding a loop of steel through an induction system that heats it to 1,500°C before it drips down, like a miniature ball of liquid fire, before fizzing out in the water.

Beyond the molten metal and tubs is a vast solid steel plate, the same size as Caravaggio’s canvas and on the reverse of which are inscribed biblical texts. The curatorial blurbs bring several themes to the table, from allegories of “the continuous cycle of agency and loss” to overlaying the “noetic onto the metaphysical”. But usurping these intricate—and sometimes overcomplicated—narratives and concepts is the primordial wonder (the “maravilla” as co-curator Keith Sciberras puts it) of entering a room and seeing fire raining from the sky.

History of Night and Destiny of Comets, Gian Maria Tosatti

At the far end of the Arsenale lies the cavernous Italian Pavilion, a 2,000 sq. m space that dwarfs many other national pavilions put together. Here Gian Maria Tosatti, the first solo artist ever selected to show in this enormous blank canvas, has found the perfect foil for his site-specific environmental installations.

Waiting in a queue outside, visitors are instructed to enter one at a time and to remain silent inside the pavilion, so as to preserve the immersive experience. Do not be discouraged by these rules, or the work’s grandiose title: Tosatti has orchestrated a true transformation that is heightened by the atmosphere of hushed reverence.

A theatre of Italy’s industrial decline unfolds through a sequence of warehouse spaces filled with old machines and riggings sourced from abandoned factories—relics from a bygone era of productivity and prosperity. They are punctuated by an eerie domestic interior, with multiple doors to nowhere and the ghost of a crucifix on the wall behind an empty bed. The labyrinthine tour comes to a waterlogged finale that could be read as annihilation, were it not for the distant lights piercing the darkness—a sign of hope for humanity in the face of climate catastrophe, according to the artist.