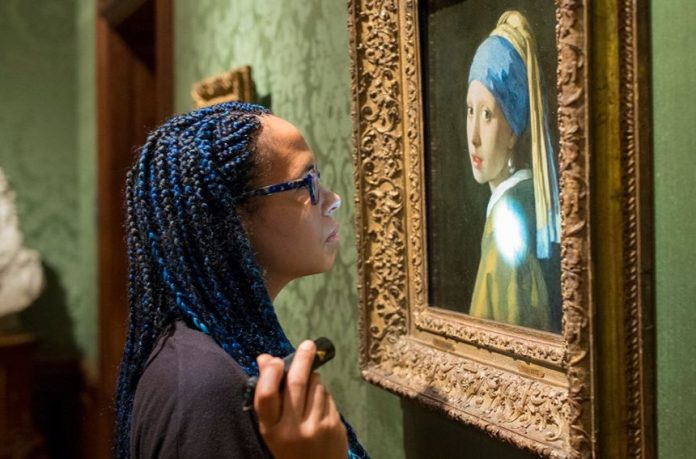 The Mauritshuis Royal Picture Gallery in The Hague has published the results of the scientific analysis of one of its main treasures – the painting “The Girl with the Pearl Earring” (c. 1665) by Jan Vermeer. The research project “Girl in the spotlight” took place for two weeks in early 2018.

An international group of conservatives, scientists, and researchers studied the masterpiece in a specially constructed glass studio in the middle of the museum hall. This allowed the public to see all the stages of the work for themselves.

The team’s discoveries relate to Vermeer’s technique, his application of pigments, and the way he “built” this painting using different layers. The results of the project, which used non-invasive imaging and scanning techniques, digital microscopy, and paint sample analysis, show that this is a much more “personal” work than previously thought.

One of the most amazing discoveries was that the background of a painting is not just an empty dark space. Behind his heroine, Vermeer depicted a green curtain, which disappeared over the centuries as a result of physical and chemical changes in the translucent paint. Using the technique, the experts were able to examine the diagonal lines and color variations that indicated the folds of fabric in the upper right corner of the painting. The second discovery is related to the appearance of the girl herself. Now it seems to us that she has no eyelashes, but studies have also revealed that Vermeer depicted tiny hairs around both eyes.

Unfortunately, the personality of the girl is still a mystery.

The study also revealed some subtle details of Vermeer’s technique. He began to compose the painting in different shades of brown and black. Infrared imaging showed wide, energetic strokes in the lower layers that are under the visible paint. The artist painted the girl’s contours with thin black lines. The analysis showed that in the process Vermeer made changes in the composition – the position of the ear, the upper part of the headdress, and the back of the neck were shifted.

The painting “lined up” from the background to the foreground – by painting a greenish back and skin on the face, the artist consistently depicted a yellow jacket, white-collar, handkerchief, and “pearl”. The decoration itself is created by translucent and non-transparent touches of white paint, and there is no hook to hang it to the ear.

And finally, Vermeer signed his work in the upper left corner with the letters IVMeer. Somewhere scientists found fine threads from the artist’s brush. 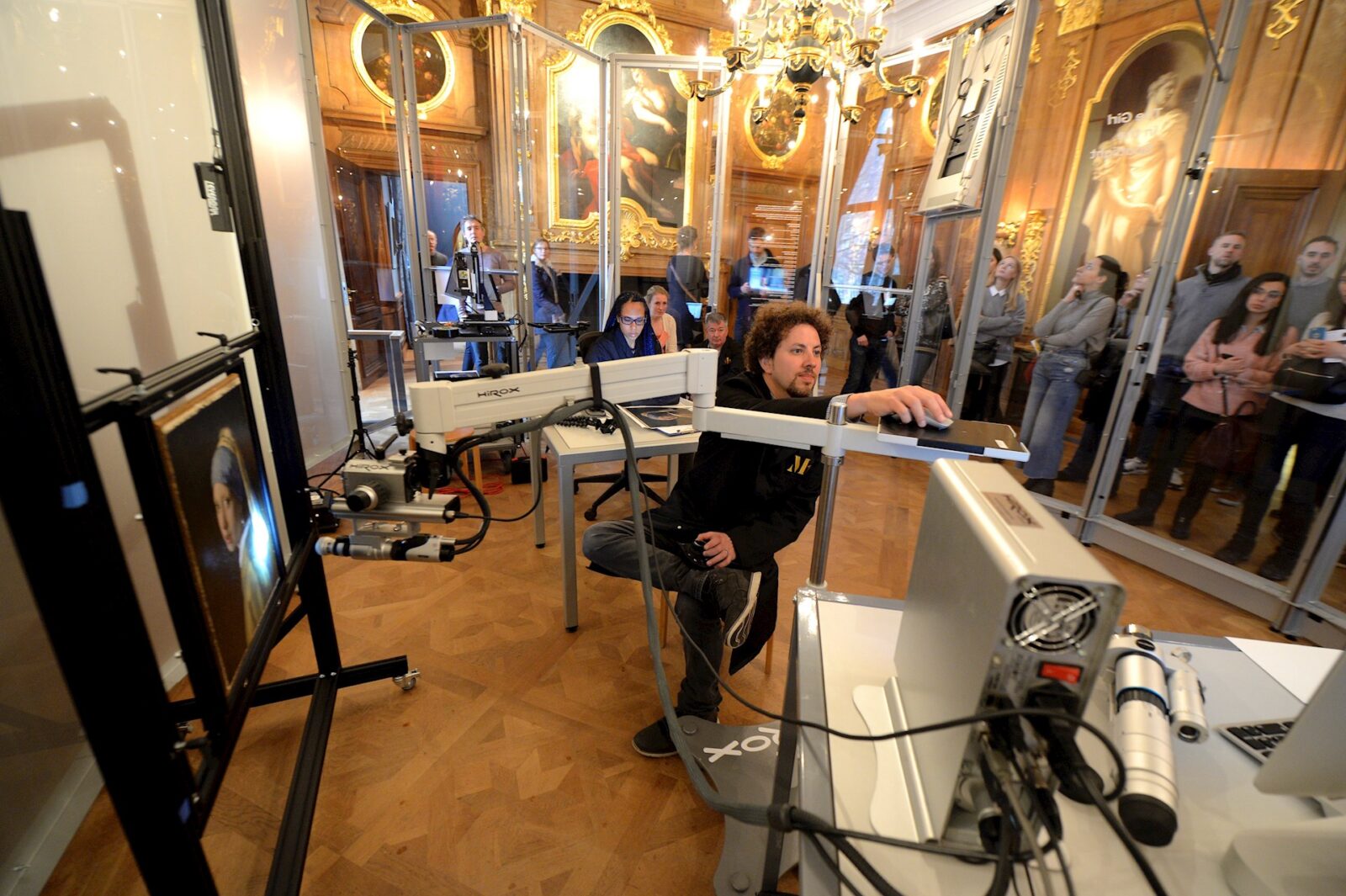 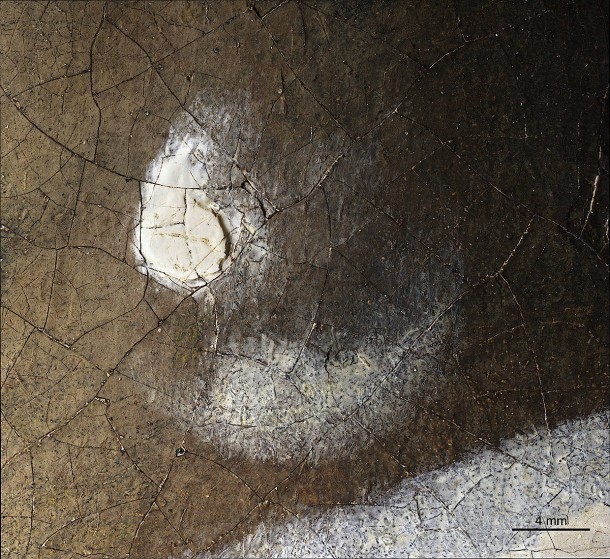 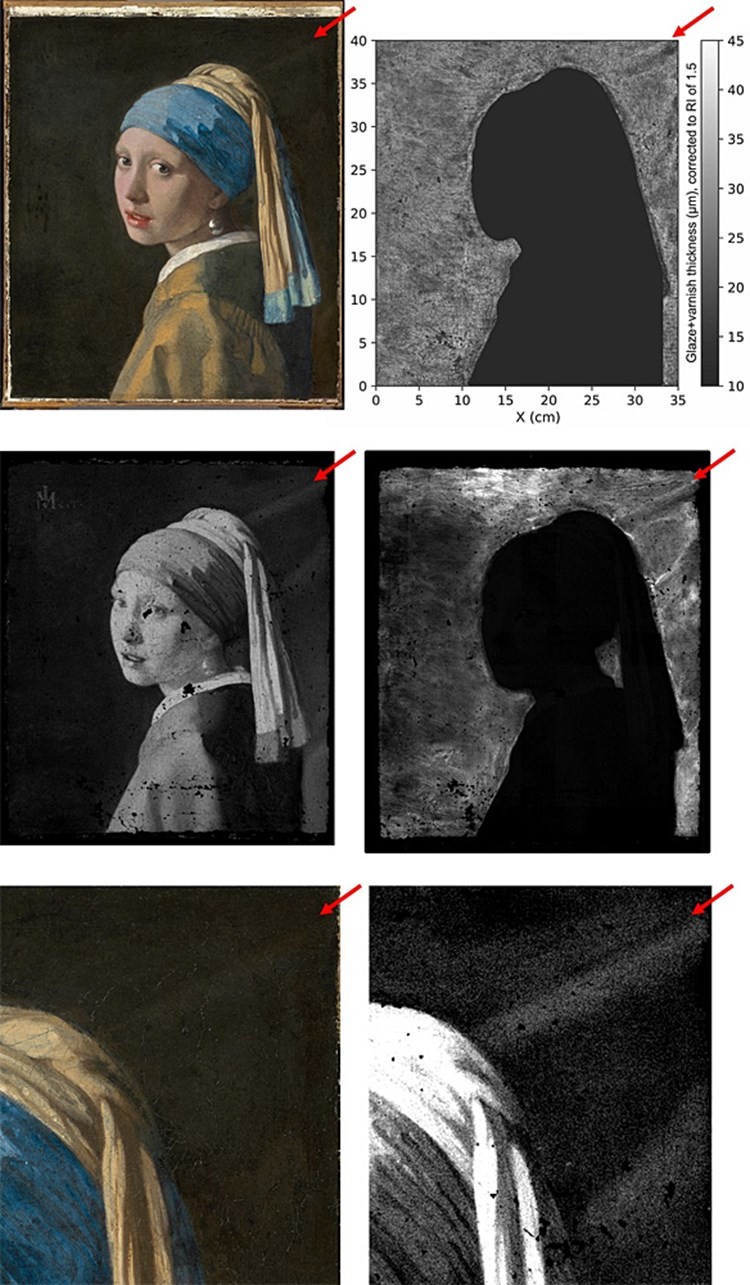 For the first time, the researchers managed to identify and accurately compare the color palette of Vermeer in this painting: red (cinnabar and carmine made of wheat), various shades of yellow and brown (earth pigments, the so-called “yellow old masters” and yellow varnish), blue (ultramarine and indigo), shades of black (coal and pigment made of charred animal bones). Vermeer also carefully selected two types of lead whitewash with different optical properties to achieve subtle transparency and a smooth transition from light to shadow on a girl’s skin.

The head of the scientists’ team Abbie Vandivere, the chief conservator of Mauritsheis, writes that like most Dutch artists of the 17th century, Vermeer used oil paint. The binding medium was linseed oil. “The low speed at which the oil paint dries allowed him to mix colors and manipulate the paint after application. To achieve a fine transition from light to shadow, such as translucent skin on the edge of the cheek, Vermeer used a soft dry brush to mix the wet paint after application,” the expert explains.

Vandivere also points out that the pearl that gave the painting its name “may not be a pearl at all”. “Costume and jewelry experts believe that it is too big to be real. Perhaps Vermeer exaggerated it a bit to make it a focal point of the painting,” writes the conservative.

Raw materials for paints have come from all over the world – from the regions that are now part of Mexico and Central America, from England and possibly Asia or the West Indies. Vermeer masterfully used high-quality ultramarine on a scarf and jacket. Making this pigment from the semi-precious lapis-lazuli stone, which was mined in present-day Afghanistan, was complex and laborious. In those days, this pigment was more valuable than gold. One of the discoveries of the new project was that the stone was probably first heated to a high temperature, which made it easier to grind and gave a more intense blue color.