Home News What Art Does Brad Pitt Collect? Here Are 8 Artists Whose Work... 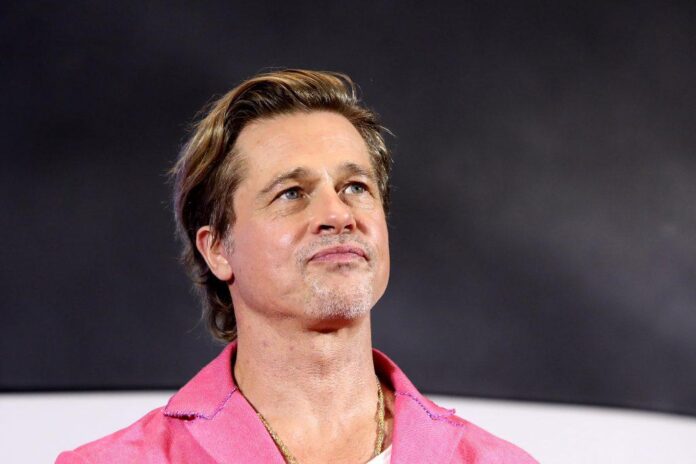 Like any good artist, Brad Pitt is always evolving. Sometimes, it just takes a change in circumstance to blow down the first domino. The star of the current slapstick action flick turned over a new leaf following his split from Angelina Jolie in 2016. The actor got sober, holed up with high-art friends, and channeled his pain through painting and sculpture.

Although the couple’s art collection has, presumably, been divided up long ago, their divorce continues to ricochet its way through the courts. Meanwhile, Pitt has gotten deeper into art: He took painting lessons from the British artist Colin Davidson, threw his weight behind the controversial Los Angeles County Museum of Art redesign, went gallery-hopping with fellow actor-turned-artist Alia Shawkat, made sculpture with Leonardo DiCaprio in his at-home studio, and, of course, posed for an endless parade of selfies at Frieze Los Angeles.

In an interview on Marc Marron’s podcast in 2020, Pitt declined to call himself a “collector” because, he explained, he doesn’t buy art as an investment. Instead, he’s interested, “in certain things that move me and I like to be around each day, and that might inspire my kids.”

Pitt has kept the precise contents of his holdings relatively quiet. But we scoured the leading man’s coordinates for the past few years to assemble a snapshot of his fine art and design collection. What surfaces is an array of artists—often based in Los Angeles, sometimes with a European provenance, and almost always male—who explore history, human nature, and creativity in their work. Catch a glimpse of the highlights below. 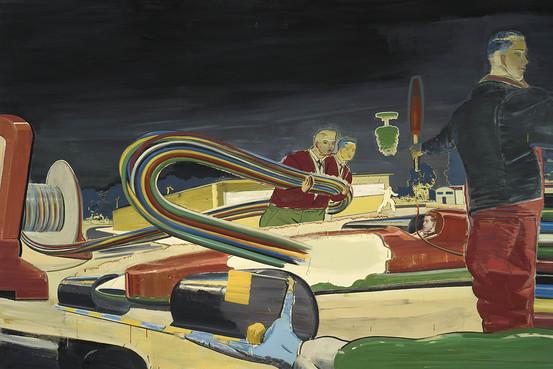 The actor picked up this nine-foot-wide racetrack painting at David Zwirner’s booth at Art Basel in 2009. After gazing at the painting on the stand for a few minutes, he reportedly returned with L.A. collector royalty—Edythe and the late Eli Broad—in tow to confer. Hours later, Broad told the he gave the actor a push. “I told him we had four Rauchs and if he didn’t buy it, we probably would,” he said. Pitt eventually pulled the trigger, shelling out just under $1 million for the painting. 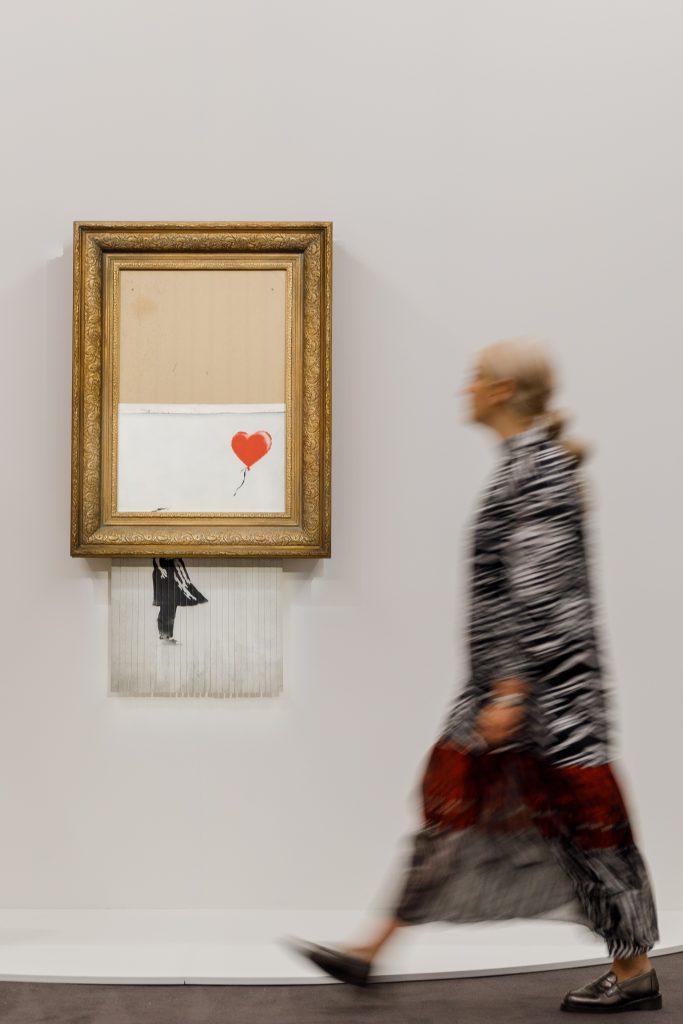 Back in 2007, Lazarides Gallery in London held a special auction of works by Banksy. According to the , the couple picked up around £1 million (roughly $2 million at the time) worth of works there. But Pitt boasts an even rarer tie to the anonymous street artist: reported that he became one of the few collectors to ever convince Banksy to create a commissioned work. The artist reportedly made a mural inspired by New Orleans at the at the French estate Pitt used to share with Jolie. 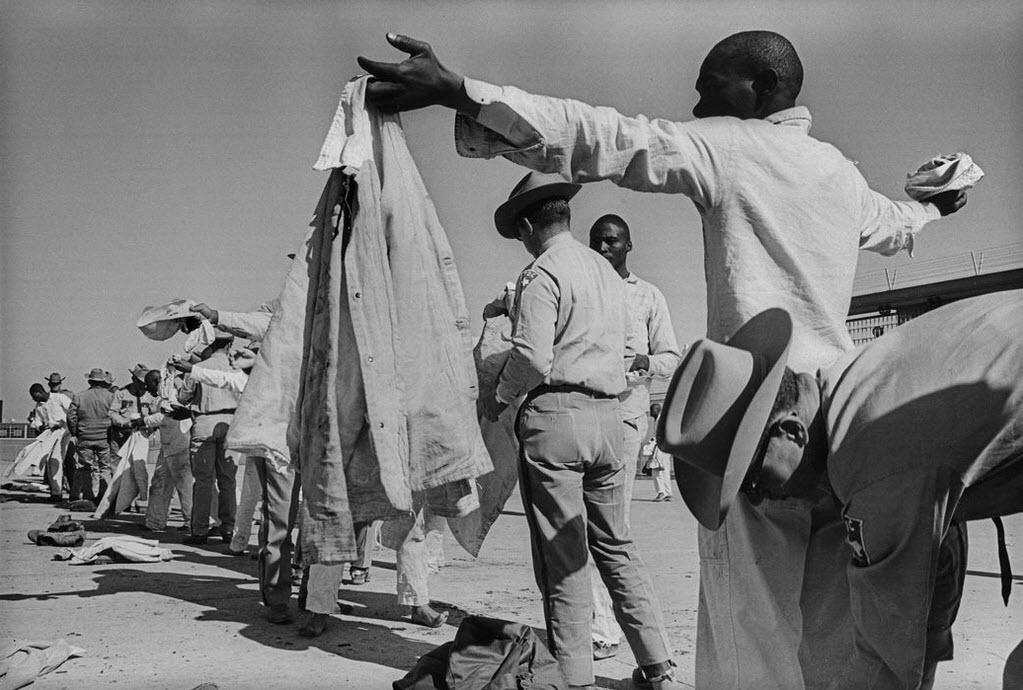 Pitt picked up a photo by Danny Lyon, an American photographer who chronicled the Civil Rights Movement, at Paris Photo Los Angeles back in 2014. The photograph captured a policeman in Clarksdale, Mississippi giving the finger. Terry Etherton, whose gallery sold Pitt the work, told Phaidon: “I asked him why that image and he reminded me about them shooting in the area where the picture was made…. He had his assistant pick up the picture at the end of the show. We found him to be humble, sincere and very unpretentious. And, of course, handsome.” 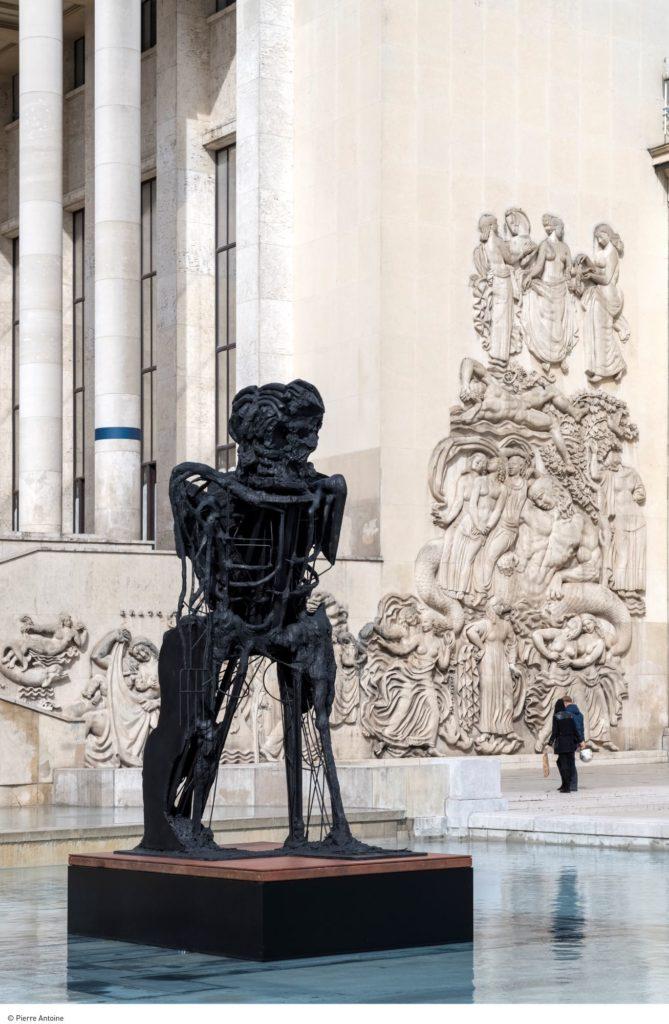 Houseago and Pitt go way back. His house was the creative haven Pitt famously holed up at while escaping fallout from the split heard round the world. Pitt—who helped Houseago through his own difficult times—has said he owns a number of Houseago pieces. Though he also told Marc Maron that some of the British-born, Los Angeles-based artist’s work has the potential to scare his children. 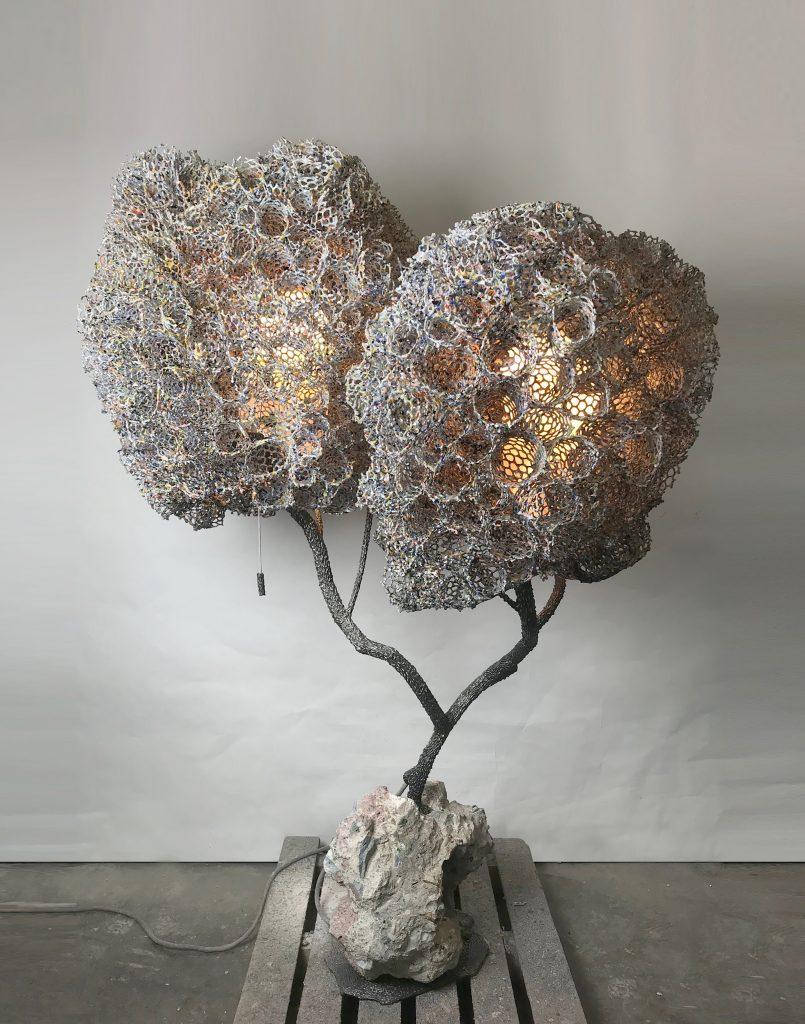 The star is also known to have a thing for high-end design, and can frequently be spotted at Design Miami and Design Miami Basel. On a visit to the Swiss fair in 2009, reported that Pitt picked up three works for more than $110,000 by Nacho Carbonell, a rising talent who at the time had recently finished design school in the Netherlands. Carbonell’s playful design and sculptural objects employ recycled and industrial materials like glass bottles and mash to create organic, earthy shapes. 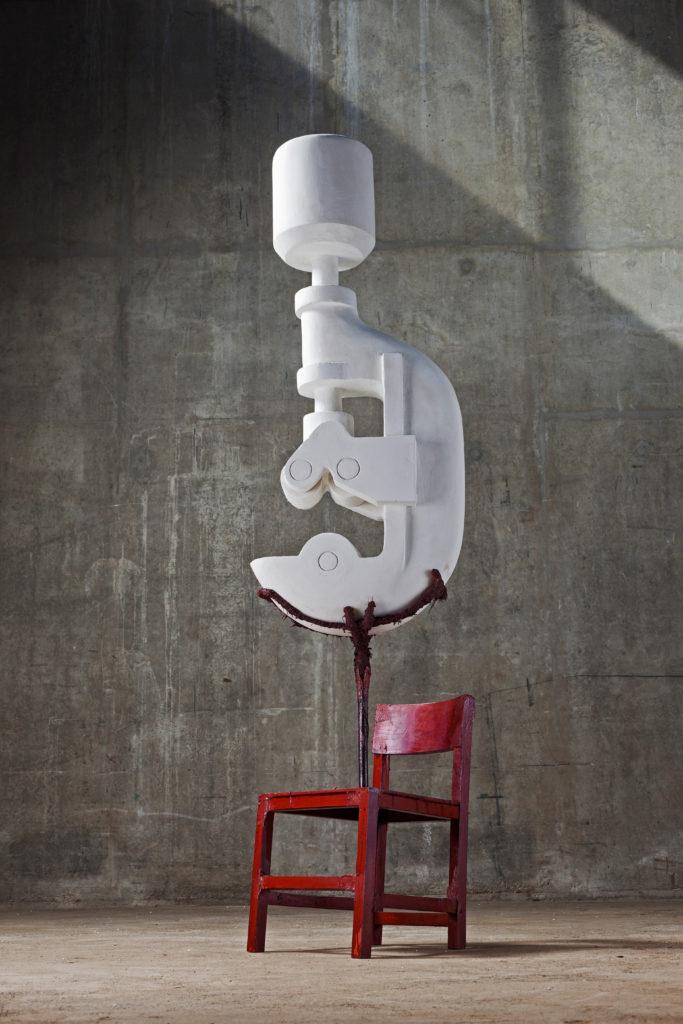 Pitt nabbed three pieces by the avant-garde Atelier van Lieshout on the same visit to Design Miami Basel in 2009. The Dutch design workshop, founded in 1995 Joep van Lieshout, seeks to “undermine the myth of the individual artistic genius.” reported he purchased the , an installation that doubles as a six-bed dorm, for $134,000, with plans to install it on his private beach in Santa Monica. 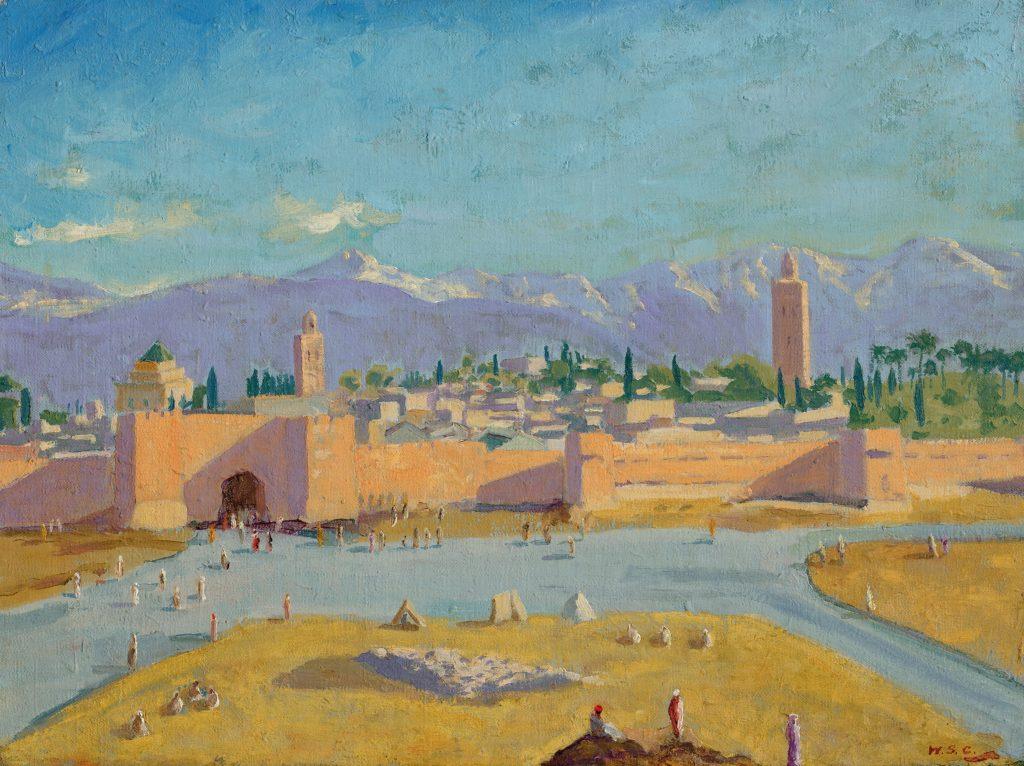 We know Pitt acquired the British Prime Minister’s canvases once upon a time, but it’s hard to say how many Churchills, if any, still live in his collection. In 2021, reported that Jolie was putting a painting Pitt gave her as a gift up for sale at Christie’s. The canvas—the only one the ex-P.M. painted during WWII—fetched $11.6 million, nearly three times its presale estimate. 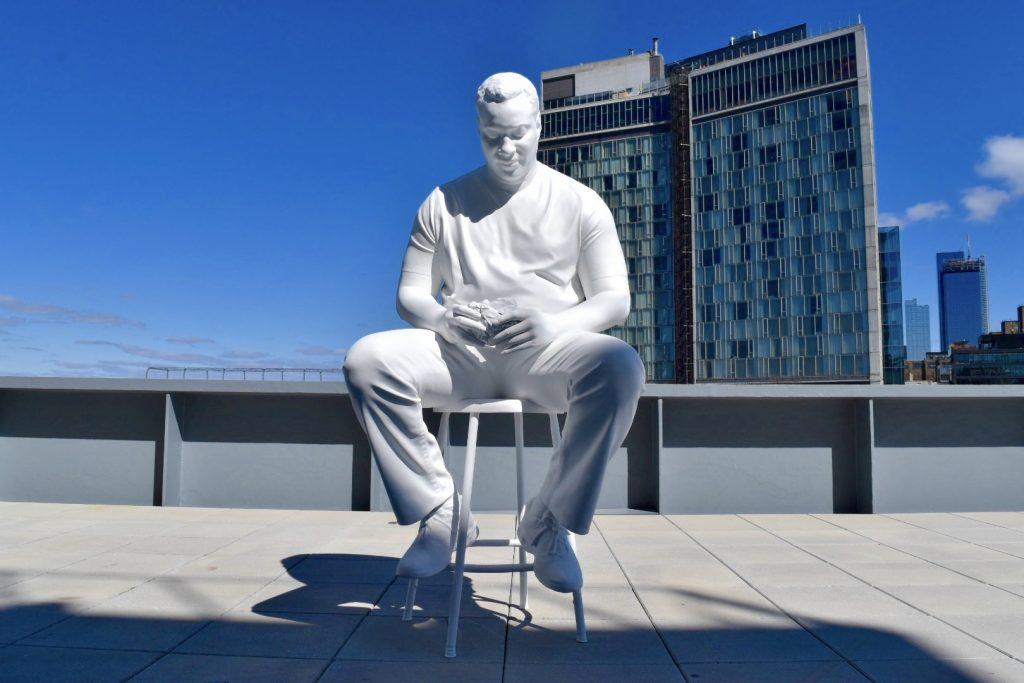 Charles Ray, (2021) on the roof terrace of the Whitney. Photo by Ben Davis.

In an interview in June with to discuss the “final trimester” of his career, Pitt waxed poetic about the Chicago-born, Los Angeles-based Charles Ray. He had just caught the seminal sculptor’s show at the Pinault Collection in Paris. “The way the light catches it is something unbelievable,” Pitt said of a Christ crafted from paper. “He’s floating, it’s like he’s free of it, it’s just so stunning. See how it floats, and the shadow on the wall?”