Home News What is in the largest ever Documenta exhibition? No one is quite... 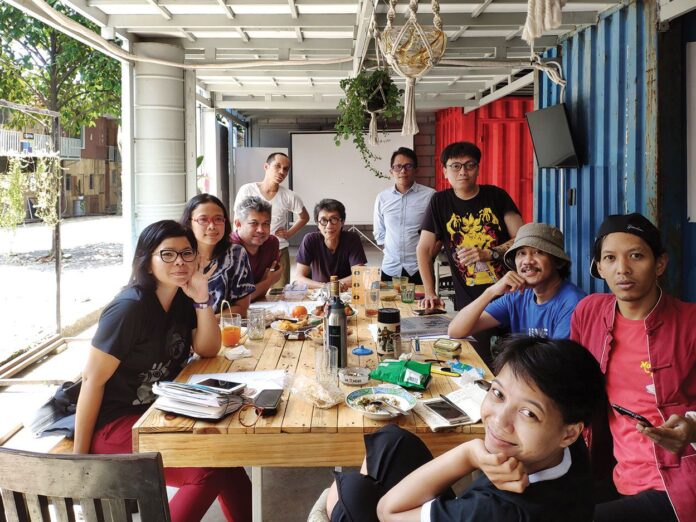 It is unusual for a media storm to surround a not-yet-open exhibition whose content and structure remain relatively unclear. And yet, due to an ongoing row over alleged antisemitism, the 15th edition of Documenta is now embroiled in a scandal that threatens to engulf the show before it has even begun.

“We want to have conversations on issues that are actually in the works,” says Farid Rakun, a member of the Indonesian collective ruangrupa, who are the artistic directors of this year’s edition of the sprawling exhibition taking place every five years in Kassel. Centring their exhibition on artist groups like themselves, ruangrupa are inviting an ever-increasing list of artist and activist collectives to take part (at time of writing, 67 collectives or groups have been invited), as well as works by a handful of individual artists with collectivist practices,

Rakun, along with his 20-strong group, has been working on the show for the past three years, but since January a number of incidents have drawn them into the centre of a well-established and highly sensitive debate around Israel and racism in Germany. They centre largely around the pro-Palestine stance of two artists from the participating group The Question of Funding, as well as the Palestine-based organisation Khalil Sakakini Cultural Center. This has caused the Alliance Against Anti-Semitism Kassel to speak out against the exhibition for involving “anti-Israeli activists” and violating Germany’s strict antisemitism laws. Last month, talks organised, in part, to address these accusations were cancelled, following further complaints from the Central Council of Jews in Germany to the country’s culture minister Claudia Roth.

Most recently, the exhibition space of the Palestinian artist group The Question of Funding—whose political views are considered by a number of Jewish and Zionist groups in Germany as being antisemitic—was vandalised and defaced with threatening messages as part of an attack that the Kassel police are treating as a politically motivated.

Ruangrupa’s position on the matter was clarified through the release of an open letter published on the e-flux website, in which they describe the accusations of antisemitism against Documenta as “baseless”. The letter states: “Censorship, guilt by association, racist smears, and rumours—repeated uncritically—threaten to make international cultural cooperation in Germany impossible,” before concluding that “the preliminary failure of the forum is thus also a failure of the German debate on antisemitism and racism”. Rakun says that they are still considering whether the debate can be addressed in some other forum at Documenta 15, but admits that at this stage the group are undecided about what this would look like.

While by no means unavoidable, a situation of this nature was made more likely due to the number of participants in this year’s Documenta—by far the most in the exhibition’s 67-year history—operating with little oversight from the artistic team. To organise themselves, the participants—numbering around 1,500—have been divided into working groups called majelis (the Indonesian word for gathering), with whom they will exhibit.

Rakun maintains that ruangrupa are not playing the usual curatorial roles and have “more or less” allowed artists to do what they were already doing, asking them to show “continuations of existing practice” rather than creating new work for the show. Indeed, according to Gertrude Flentge, a member of Documenta’s artistic team, this will perhaps be the “least object-based Documenta ever”, with very little shipping of art taking place. Instead, there will be a focus on creating works on site, whether in the form of tangible pieces, or “artistic conversations, music, cooking and assemblies”. One collective, Más Arte Más Acción, from Colombia, which develops critical frameworks around territorial struggles, will also stage ten separate exhibitions over the course of the show’s 100 days.

Since last month’s attacks, a number of meetings have been held among exhibiting artists around their safety, with protests now expected in Kassel for the exhibition’s opening. The collective Party Office, based in Delhi, share the same vandalised exhibition premises as The Question of Funding, which they have converted into a sex dungeon, soft leather play room, as well as a dancefloor and reading library. Here, Party Office will host a series of BDSM parties throughout the course of documenta’s run that explore the “intersections of gender, kink and national constitutions”, with a focus on the history of the anti-case movement in South Asia, says its founder, Vidisha Saini.

The collective’s practice considers how for “queer, trans neurodivergent people, everyday survival is labour”, and questions the boundaries of work under neoliberal frameworks. These topics have remained at the forefront during the conversations Party Office have had with other Documenta collectives on how to pool resources and knowledge to protect themselves when threatened with violence, Saini says. The focus of these discussions, she says, remains on community, rather than relying on the Kassel government, as they are “not looking to replicate a police state”.

Documenta will take place across 32 sites in four regions of the central German city. At the show’s centre is the concept of lumbung, the Indonesian word for “rice barn”. This system is used in rural Indonesia to store crops as a community resource, distributing them according to jointly determined criteria. For ruangrupa, this means rooting the exhibition in “principles of collectivity, communal resource sharing, and equal allocation”. Although a literal rice barn will not be built, the thrust of the show seems to be the transformation of space, and gestures of community building. Ruangrupa will, for example, create RuruHaus, converting a former department store into an informal space resembling something between a living room, kitchen, radio station and a workspace.

Several collectives will stage large, ambitious works in an exhibition complex comprising the vast former headquarters of the Hübner transport engineering company and a disused indoor swimming pool in the city’s industrial east. Among these will be the Jatiwangi Art Factory from Java, who will exhibit sculptures and models related to their local community building projects using clay, and the Fondation Festival sur le Niger from Bamaoko, who will organise events as well as show works related to the humanist Malian Maaya philosophy, which in its collectivist nature is a “form of lumbung”, according to Flentge. More ideas shared with The Art Newspaper, many of which are still inchoate or intentionally amorphous, include a street party hosted by four separate groups, including the Dhaka-based Britto Arts Trust.

“The aim is for everyone in the artistic team to still be surprised at what happens in Kassel during these 100 days,” Rakun says. “We want to counteract the idea that people get when they attend a biennial: that they haven’t seen everything but someone else has, that their experience was somehow inadequate.” While Rakun diplomatically declines to compare his exhibition to the Venice Biennale—“ruangrupa do not aim to antagonise anyone”—he hopes the differences between Documenta 15 and other mainstream multi-venue exhibitions or events will become “apparent”.

Many visitors to the vernissage of Documenta will likely come straight from Art Basel, which opens a few days earlier, and where they will likely have spent the better half of a week frogmarching down the aisles of the fair halls attempting to see as much as they can. Rakun and the Documenta team hope to provide a tonic to what is an often exhausting way of viewing art, suggesting that “other ways of making and experiencing art are always possible”.

What I Buy and Why: Design Collector and Fair Director Jill Bokor on the Danger of Buying a Chair That You Can’t Actually Sit...