Home News What We Hold in Common: Making Meaning by Collecting Objects and Narratives... 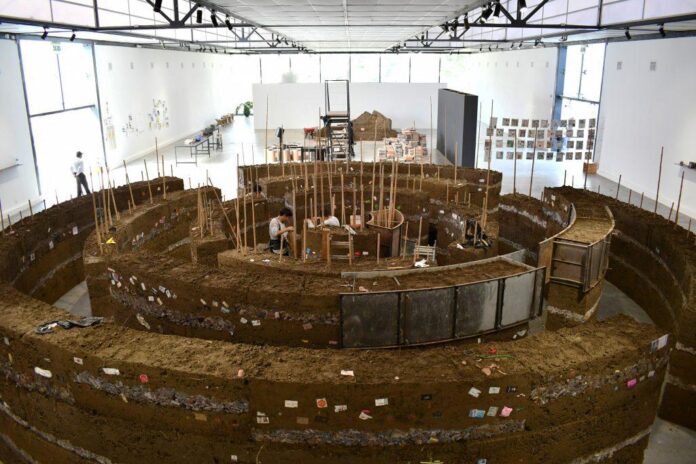 For PROTODISPATCH, Ximena Garrido/Ishmael Randal Weeks write and share images of a collaborative ongoing work called Materia Comun (Common Materials) which is a participatory earth work. Their focus is on structures that tie coexisting cultures together. Here human bodies, thoughts, and emotions are matter that is equal to vegetation, animals, and the earth itself, interconnected and in constant flux. With the public participants’ own inspiration, the physical materials people brought and texts being read started from mass media and mass-produced objects and slowly became intimate items with deep meaning, personal journals, and letters. Materia Comun (Common Materials) touches the core of humankind’s temporary life in a body, occupying a society/city, in relation to a cyclical, interrelated organism, earth, of which we are each a very small part. — Mari Spirito, founder of Protocinema

We both are from Perú and have experienced similar realities while growing up during the ’80s and ’90s. It was a very intense period of social and political unrest, as well as a deep economic crisis. Perú has a rich ancestral culture and history and was a center of Spanish control during the colonial period. The clash between the two cultures led to a series of disruptions and radical changes, which define its social and cultural realities reflected today.

With the hope of making meaning of these ancestral, historical, and contemporary realities which are embedded in daily life, we began a process of creating a collaborative project using Peruvian soil, which not only has a sacred significance in Peruvian Andean culture, but is also used as building material for constructing adobe structures. We made a visit to Chilca, a nearby town on the Coast of Lima with black soil lagoons. People travel to this Laguna Milagrosa from different parts of the country, to soak in its ¨magical soil¨ and recover from their daily life and problems, as well as to treat illnesses such as rheumatism, sterility, arthrosis, asthma, etc. The black soil has high levels of minerals, which is also good for several skin conditions. 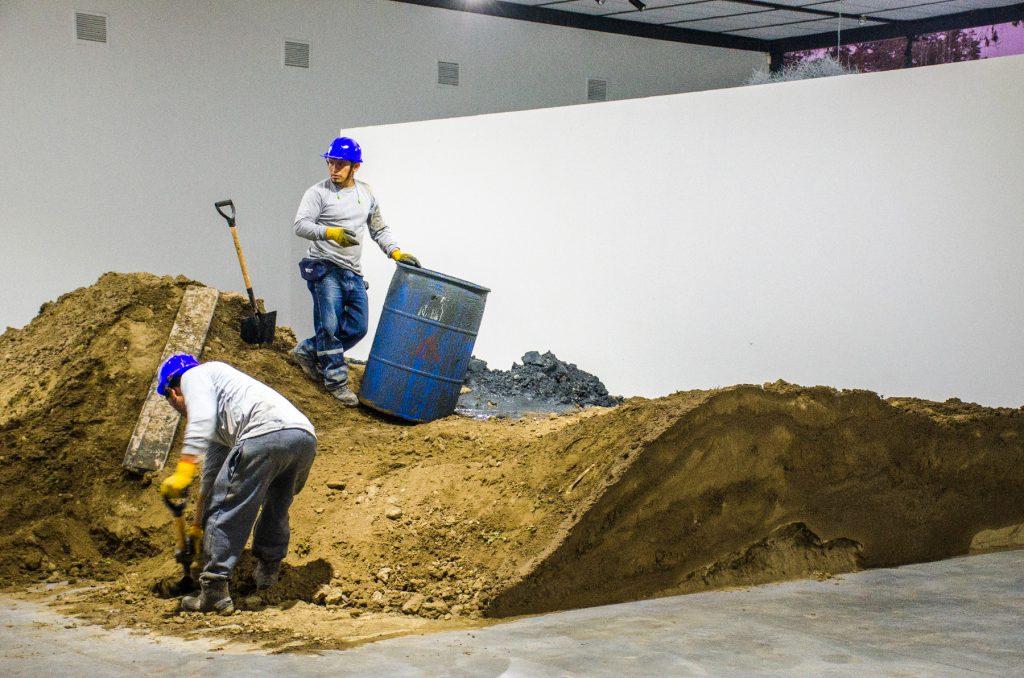 Chilca´s historical importance as one of the oldest settlements in Lima, and the presence of the pre-Hispanic ruins of Bandurria and Lapa-Lapa were also important references for our project. Their significance lies in their relationship to structures. We are looking at the history of materiality and this specific structure goes back to pre-Columbian architecture and tells us about the development of our culture today. These archaeological sites are still sacred now, in fact this structure ties all these coexisting cultures together. Recently, this location has also become associated with UFO sightings, and is used as an annual gathering place for UFO conventions, including the Rahma Mission. The actual slogan of the city is “Chilca… es de otro mundo” (Chilca is from another world), with alien signs in different parts of the town. 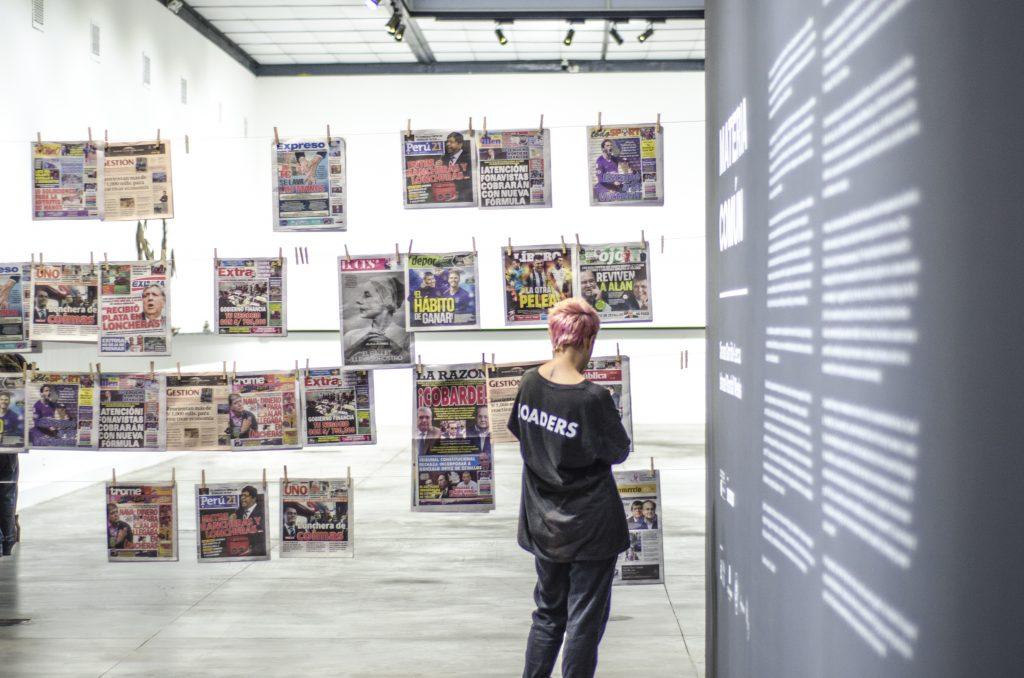 We decided to combine the Chilca soil, and its ancient origins and uses, with a contemporary element that traces the history of a place. We integrated local newspapers, which are testimonies of everyday events deemed important enough to record for public consumption and posterity (no matter their veracity), enacting a process of transformation of this material by creating a pulp. This was then mixed with the healing soil, transforming the mix into a new building material. We used this material to create a structure using the technique of ¨tapial,¨ an ancient building technique which uses molds to ram earth into walls. 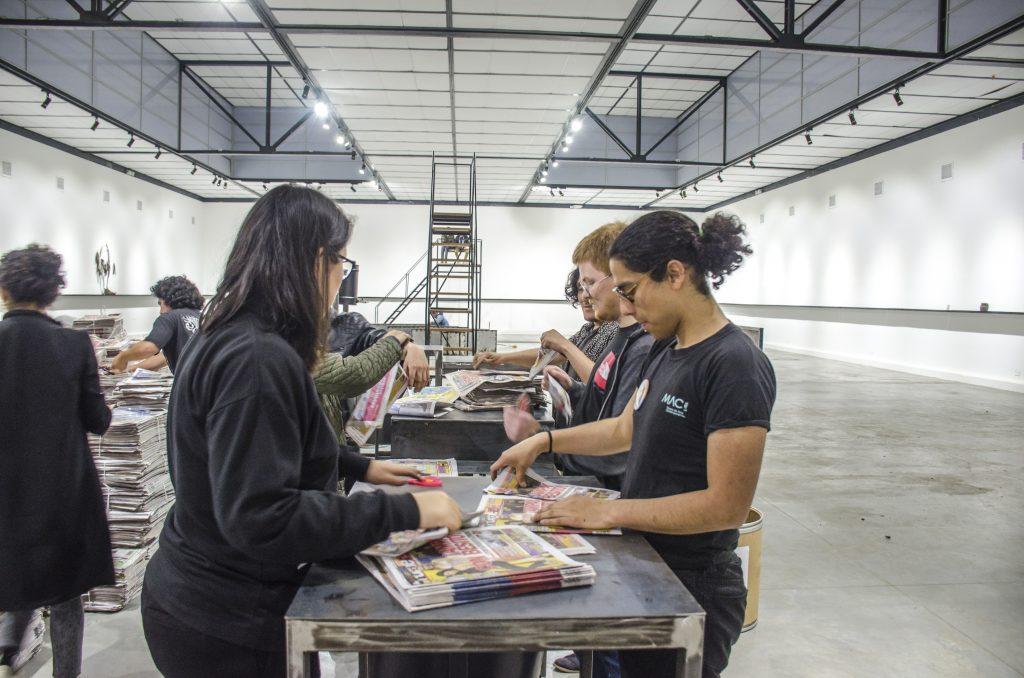 We also wanted to engage the public in the process of making this new material and structure. We made a mini artisanal paper-pulping factory where visitors sorted and helped turn information, in the form of daily local newspapers, into a pulp. We thought that with these two elements (the soil from Chilca and the newspaper pulp) we could build a structure that represented utopic model for a renewed and remade society. The new structure could be a symbolic representation of a city constructed in the realm of collaboration and common knowledge. 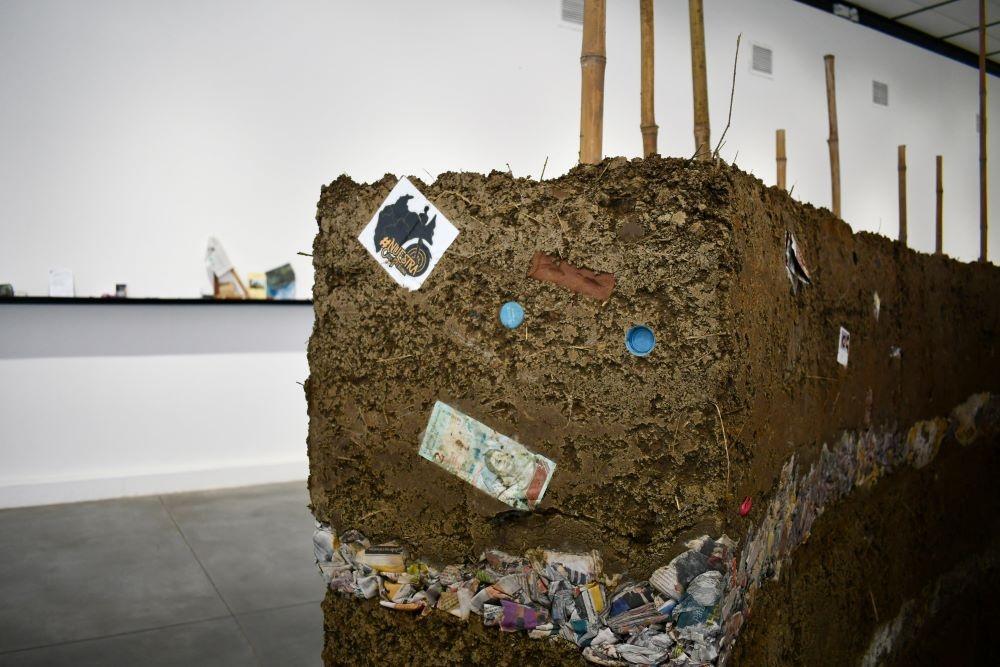 The utopian model we built was based on Tommaso Campanella’s , one of the very first early Enlightenment utopian fictions. Campanella, an Italian Dominican philosopher born in the late 16th century, described the ideal city as containing all knowledge within its walls. The city in Campanella’s vision was heliocentric, where each segment of the walls contained a living visual library. Information was there for all to see. Nothing was hidden. The utopian basis of the book comes from 16th- and 17th-century discussions of the discovery of the so-called “New World” and its potential for creating new societies free from the corruption and violence that was taking place at the time in Europe. (Campanella wrote the novel while imprisoned for heresy by the Spanish crown.) 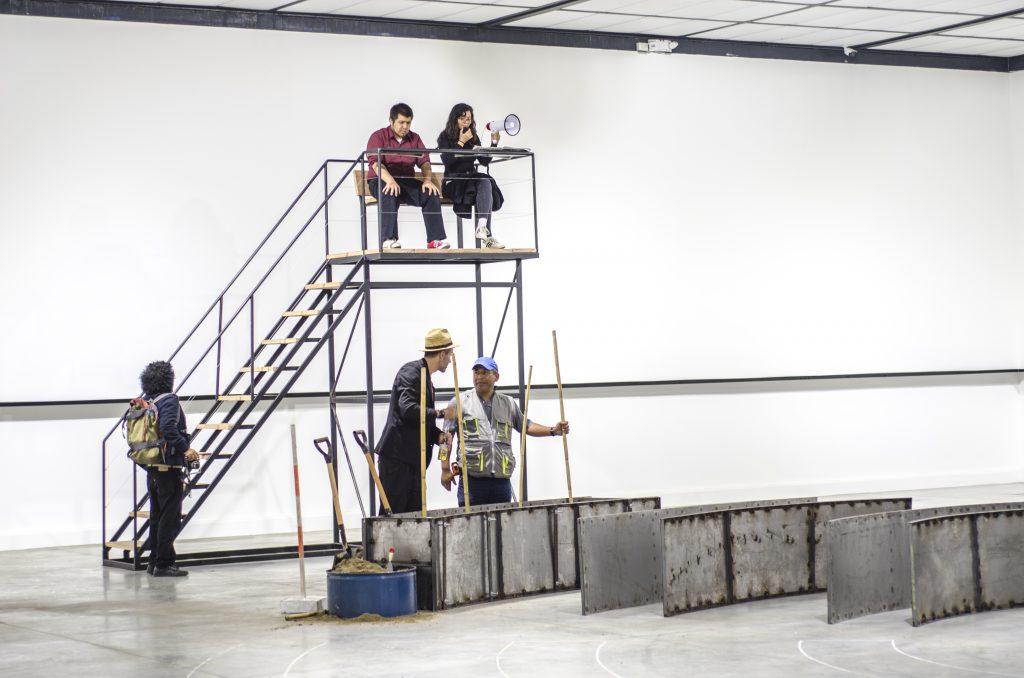 The more we studied this form, we understood the heliocentric design’s symbolic parallels with the Incan cosmological vision, and even some of the architectural modeling of Sacsayhuamán, the citadel on top of Cusco, the capital of the Inca empire. We also saw this same design system in the camps set up by the Rahma Mission started by Sixto Paz Wells and the other UFO specialists who make yearly visits to Chilca. We embedded these ideas into the form of the project itself. At the same time, the structure is also very similar to a panopticon, with an inaccessible center. The center’s location was evident, and visible from above, but it was frustratingly inaccessible. By making the center or core inaccessible we wanted to emphasize the contradictions that many times have compromised the ideals of utopian cities, which as history has shown, turn out to be impossible and ideologically complex, and often devolve into fascist and colonialist realities. 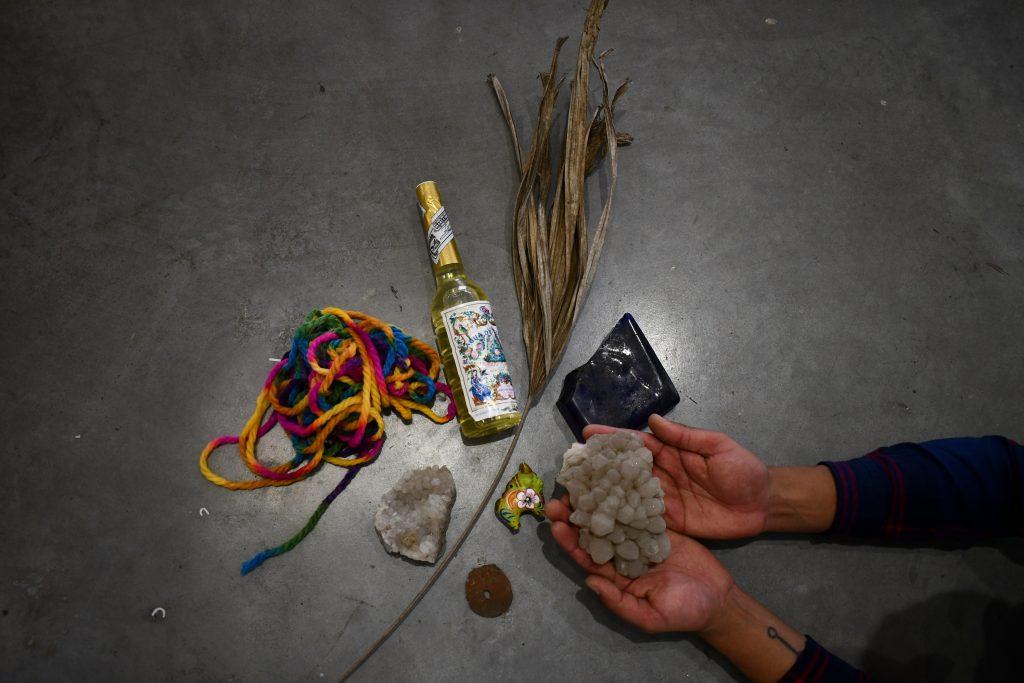 A selection of offerings brought by community members for the project. Courtesy of Materia Comun (Common Materials).

We also invited the public to bring “offerings” that could be mixed together with the earth and the newspaper pulp. The combination of these three elements, the earth, the newspapers, and the offerings, became the foundations of a communally created new construction. All the contributed objects were displayed on a shelf around the perimeter of the space where the structure was being built. Each “offering” was cataloged in a notebook with the date, name of its donor, alongside a description of the object, until they could be mixed in with soil and the newsprint. These objects became very important parts of the walls because they were both highly personal and portrayed a specific moment in contemporary Lima society. The objects included sunglasses, photographs, pieces of string and fabric, and other items that held meaning to the person who contributed it. The rammed material combined with these objects became a kind of geological strata, a form that portrayed through its layers a record of the moment in which it was made. 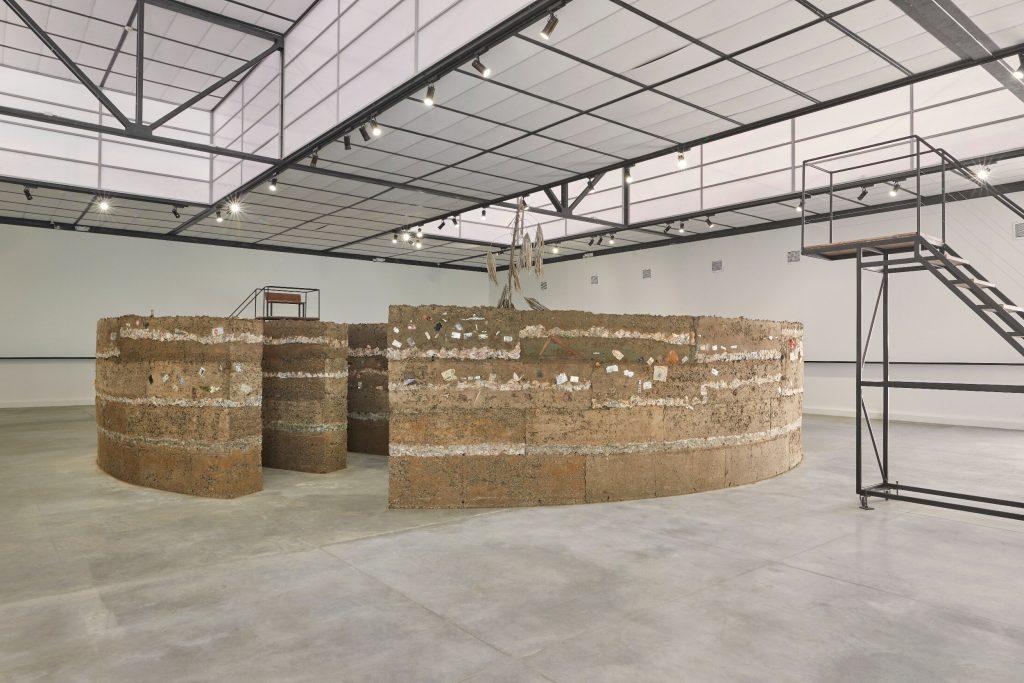 As the offerings accumulated, people also were invited to read aloud excerpts from local newspapers, which were brought to the site on a daily basis, from a tower overlooking the structure being built in the gallery. Given the overwhelming amount of negative and fake news in the extractivist Peruvian society, we thought of these readings as an interesting confrontation with the utopian structure that was being built underneath. Some readings focused on articles published on the “Periódicos chicha,” Peruvian tabloids centered in sensationalist crime and celebrity journalism. People also began to bring their own texts to read, sometimes leaving them behind. This added an aural aspect to the room in which all of the offerings were held, and where the newspaper pulp and earth bricks were being made. With this mix of old beliefs, magic, fake news, and chance encounters with texts being read with a megaphone, the space vibrated with layered meanings. Hearing all these readings, combined with the offerings, the construction crew, the volunteers, created a charged environment which was both otherworldly and terrestrial. 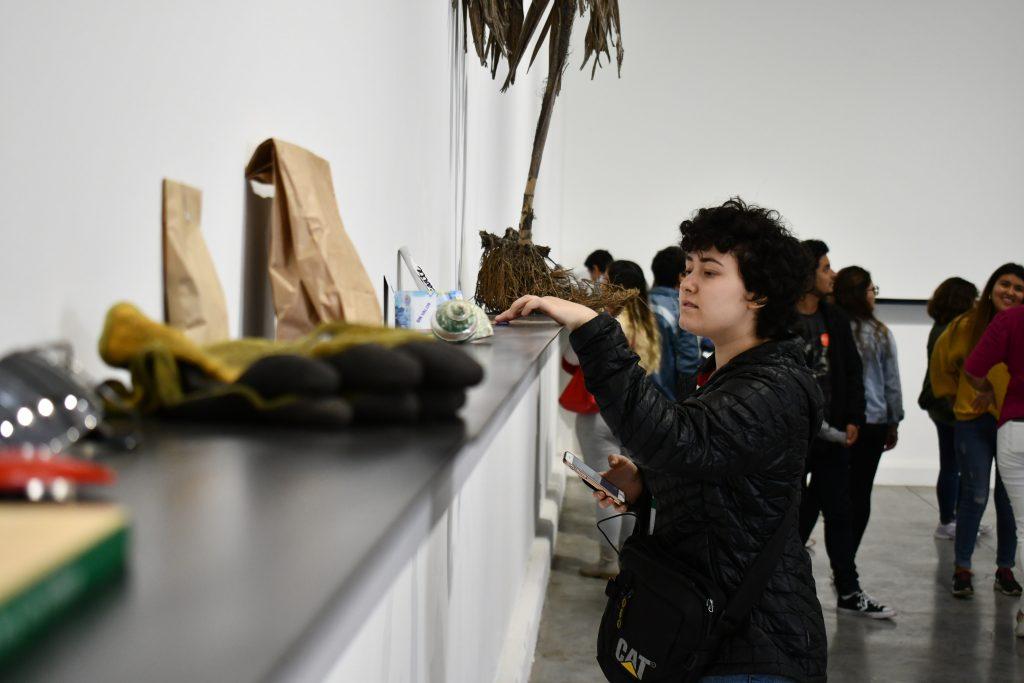 From the outset, we wanted to encourage the process to fall out of our hands, to be a place for anyone to speak through the prompts we had instigated and orchestrated. Once the offerings started coming in, we were overwhelmed by the number of items brought and the participation of the public, as well as their generosity. The process of sharing this common matter was moving and it mapped our collective realities and experiences in a material sense, through the combination of highly personal objects and the process of their integration into the larger mud structure. The newspaper pulp, with its inherent lies and truths, was layered between the offerings embedded into the very earth of Peru. The process materialized the state of mind and particular idiosyncrasy of place in that moment in time. It would be great to be able to reactivate this project in other geographies and different contexts. What might this tell us about the geological and social strata of each place?

Spotlight: An Exhibition of Yayoi Kusama’s Most Iconic Motifs Alights at PAD London