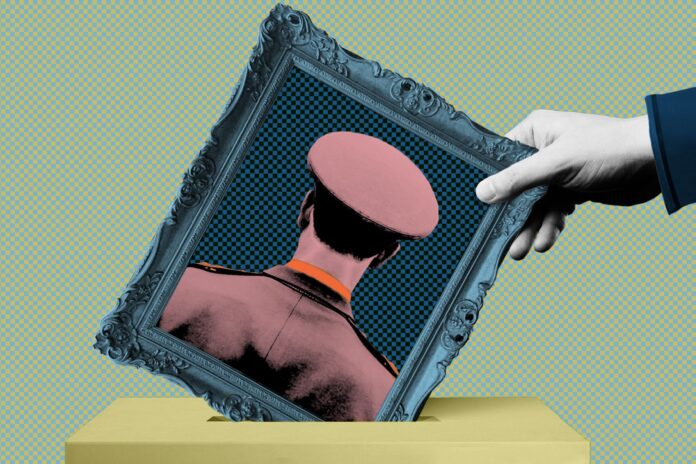 So now Imelda Marcos’s “Picasso” has reappeared in the former First Lady’s home in San Juan, Philippines. The painting—from the photo, it is impossible to verify its authenticity—is just one of more than 200 works of art acquired by the Marcoses in the 1980s and 1990s, when they looted their impoverished country of some $10bn.

Footage of Marcos in Manilla from the 2019 documentary The Kingmakershows the Picasso hanging above her sofa, but also shows the appalling taste of a woman who proclaims she “buys beauty”. Quite apart from the bizarre accumulation of no less than 52 paintings by the minor Impressionist Paule Gobillard and a fake Michelangelo, Marcos’s house is stuffed with extravagant, gilded gewgaws. Elaborate torchères and ornate statuettes as well as ostentatious pieces of furniture cram every available space.

Marcos is not alone. Check out Saddam Hussein’s vulgar presidential palace, with, for instance, a bed draped in nauseous old pink and apricot. Hussein also had a large collection of works by the US sci-fi artist Rowena Morill, featuring bare-chested warriors and forked-tongue dragons.

A curious aspect of all this is the lack of any apparent interest in authenticity, let alone connoisseurship. Imelda Marcos certainly owned a lot of bogus art—starting with the Michelangelo—and apparently knew some was fake when she bought it. Putin certainly has the means to buy genuine antiques, but seems to prefer the vastly expensive but ersatz Italian versions.

While not a dictator in any way, the former US president Donald Trump has equally awful taste in furnishings and owns two “Renoirs” that are in fact mere reproductions of works in museums. When challenged about their authenticity, he was blithely unaware of—or disinterested in—the truth about his “$10m” paintings.

So why do despots have such terrible taste? These are not sensitive people, they fought their way to power through nefarious means—fraud, oppression of opponents and even murder. Flamboyance and flashiness are their signatures and reflected in their surroundings. Their palaces and possessions are their trophies and their way of bragging to the world that they have succeeded. And they become the physical manifestation of their immunity from prosecution or public opinion.

There may well be another issue at play as well. In the case of Imelda Marcos, a possible explanation for her knowingly buying fake art is that she was using the deals to launder money. In the documentary, she boasts of having 170 different bank accounts. Buy a “Picasso” for, say, $1m when it is only worth $10,000, from a conniving dealer who then kicks back most of the price to your offshore bank account. Hey presto! You have the money, the painting, and everyone is happy. Except of course—in all the cases above except Trump—the poor suffering people of the country you have looted from.