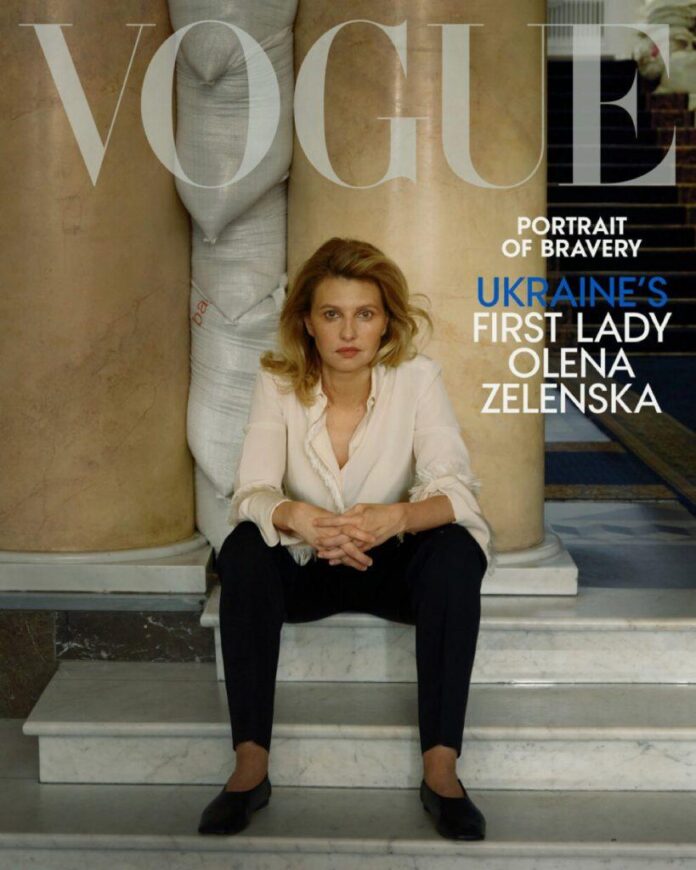 Women in Ukraine have started a new viral trend supporting the besieged country’s First Lady, Olena Zelenska, who was mocked for her “unfeminine” pose in last month’s controversial Vogue photoshoot.

Using the hashtag #SitLikeaGirl, women are posting pictures of themselves seated, leaning forward with elbows on spread legs—effectively recreating Annie Leibowitz’s portrait of Zelenska in the magazine’s digital cover story.

The feature, which included shots of both Zelenska and her husband, Ukrainian president Volodymyr Zelensky, their compound in Mariinsky Palace, drew widespread backlash for being insensitive, romanticizing war, and employing conflict zones as backdrops. The First Lady in particular faced criticism online for her posture, which some online called “too manly.”

“Many Ukrainian women were appalled by the society’s attempt to tell women which pose they are allowed to take,” Ukrainian journalist Zoya Zvynyatskivska, who launched the hashtag, told the Kyiv Post.

Zvynyatskivska’s hashtag took off quickly after she first posted it last week, with thousands of women both in and beyond Ukraine copying the gesture since. Soldiers, police officers, journalists, and professional soccer players were among those who joined the trend. Leibovitz even shared the hashtag on her Instagram stories, encouraging others to join in.

The initiative’s “goal is to ridicule the stereotypes girls and women are subjected to,” Zvynyatskivska said.

“These have been the most horrible months of my life, and the lives of every Ukrainian,” she said in a rare interview since the conflict began, and then offered up a message of optimism: “We’re looking forward to victory. We have no doubt we will prevail. And this is what keeps us going.”

Zelenska shared images from the spread on her own social media channels, calling it a “great honor and dream.”

“Now I would like you to see every Ukrainian woman here, in my place. Who fights, volunteers, settles in a refugee camp, does her job under the sound of a siren, holds on under the occupation,” the First Lady wrote. “She has the right and deserves to be on the covers of the whole world.”

“Each of you fellow Ukrainian women,” she went on, “is now the face and cover of our country.”