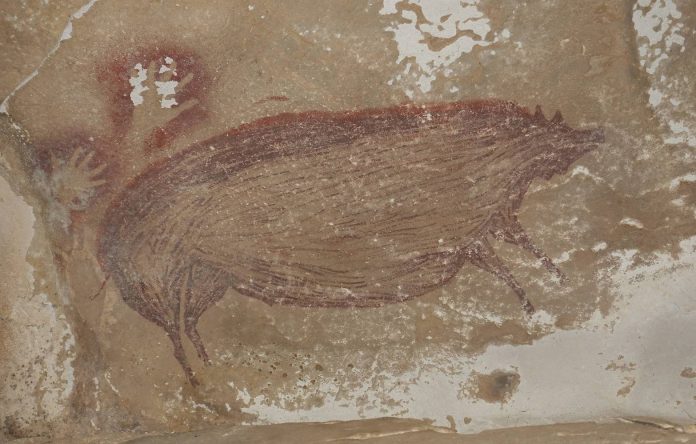 Archaeologists have found on the Indonesian island of Sulawesi the oldest known rock art. The image, whose age is estimated at 45.5 thousand years, is similar to a pig animal in full size.

The image size – about 136 by 54 cm, the material for it was a dark red ochre. The researchers suggest that the drawing depicts a celestial pig (Sus Celebensis), which is endemic to the island of Sulawesi.

“These pigs are still found on the island today, although their population is inexorably declining,” Adam Bramm, professor of archaeology at the Australian Human Evolution Research Center at Griffith University.

Previously, the oldest known rock art was thought to be an image also found in a cave in Sulawesi. It depicts half-human, half-animal figures while hunting pigs. The researchers estimated its age at 43,900 years. Experts remind that this is not the oldest drawing in the world: the simplest zigzags, lines, and symbols were drawn by people on the surface before. A similar primitive image created 73,000 years ago has been found in South Africa.

The find was made in the Leang Tedongge cave in a small valley that is now inhabited by Bugis farmers, one of Indonesia’s ethnic groups.

“There are no roads to this valley; to get there, you have to travel a difficult path along a forest path that leads up into the limestone hills and ends in a narrow passage through the cave this is the only entrance to the valley,” Bramm says.

Thus, despite the valley’s proximity to the great city of Macassar, no explorer from the West has ever set foot here before, according to its inhabitants.

Drawings of two other similar pigs have been found in the cave, but it is the oldest image that is most well preserved. The outlines of two human hands can also be seen above the animal.

In a nearby cave, called “Leang Balangajia 1”, the researchers noticed on the ceiling painted a pig of even larger size, measuring about 187 by 110 centimeters, with stenciled hands. According to the researchers, there are at least two other images of animals in this cave, but they are too damaged to be deciphered.

According to Brumm, the celestial pigs of Sulawesi are endemic to the island–the species evolved there in isolation hundreds of thousands of years ago. Archaeological evidence suggests that humans hunted these pigs and even domesticated them.

“So, it seems clear that ancient humans interacted closely with these pigs on various levels for a very long period of time. In fact, Sulawesi Ice Age artists seem to have been obsessed with the image of these pigs, which is not surprising given their important role in human life,” says Brumm.

To determine when the drawings were made, the team examined samples of several minerals that had “grown” on the pigs after the images were made. The researchers did this using uranium-thorium radioisotope dating. When rainwater seeps through a limestone cave, it dissolves tiny amounts of uranium, which eventually decays to the element thorium. By measuring the ratio of uranium to thorium in each mineral sample, scientists determined when the minerals began to grow over the paintings.

The Leang Tedongge pig is not only the oldest known rock painting of an animal but also “the earliest known representative (realistic) drawing in the world” and possibly the earliest evidence of modern humans on Sulawesi, assuming that it was modern humans (and not a close human relative such as the Denisovans) who drew pigs, the authors write in their study.

How Many Colors Can Most Of Us Actually See?

Amazing Wedding Photography From Around The World, The Winners of the MyWed Award