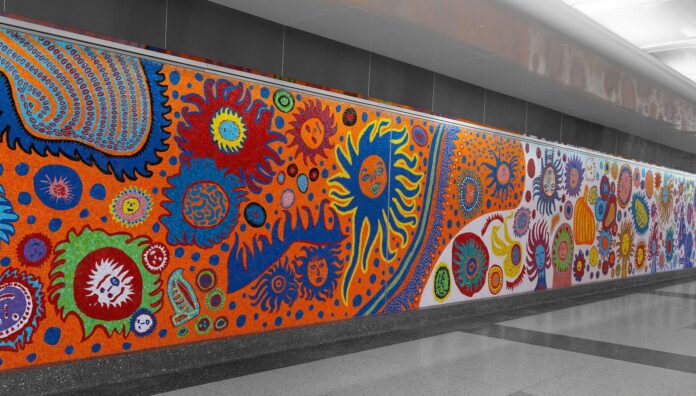 A series of enormous mosaic murals by Yayoi Kusama and Kiki Smith, first announced in October, have been revealed inside the new Grand Central Madison train terminal, which opens to the public later this month in Manhattan. The glass mosaics are the main public art attractions in the terminal, which is part of an $11bn project to connect the Long Island Rail Road (LIRR) to Grand Central Terminal that stretches between 43rd and 48th streets along Madison Avenue.

Kusama 875-sq.-ft mural, A Message of Love, Directly from My Heart Unto the Universe (2022), includes many of her trademark icons, including spotted and patterned figures, stylised suns and smiling faces. The artist, who is in her 90s and lives in Japan, realised the commission from afar. In an accompanying poem, she wrote: “My wish is to deliver this vision, with all that is my life, to the people of New York.”

Smith’s contribution is a suite of five mosaic murals—River Light, The Water’s Way, The Presence, The Spring and The Sound (all 2022)—referencing the landscapes of New York City and Long Island. They include renderings of the region’s flora and fauna, such as a type of wild turkey native to Long Island.

“I made images from nature that hold affection and personal significance to me as I hope they will for others,” Smith said in a statement. “I tried to bring pleasure to people that may feel hectic as they move to-and-fro and to give them an image to locate themselves in the station and to carry with them home.”

No specific date this month has been announced yet for Grand Central Madison’s opening this month. It is the largest new train station to be built in the United States since the 1950s.