Home News Yayoi Kusama’s Playful ‘Obliteration Room’ Has Been a Hit for 20 Years.... 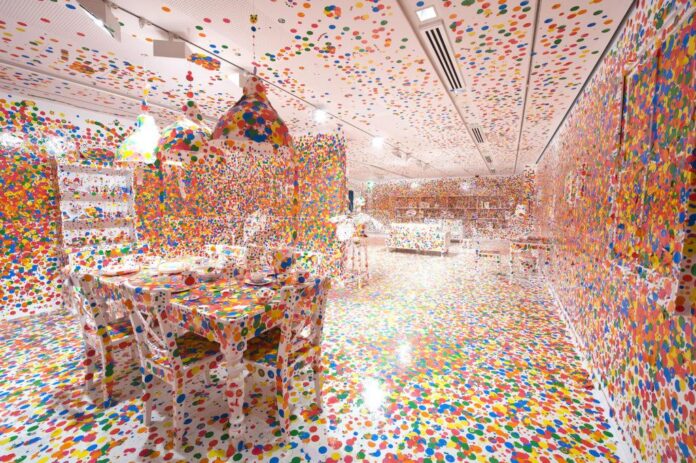 Picture this: a pristinely, even glaringly white room, filled with white chairs, white tables, white cabinets, and even white light fixtures. Now imagine that space transforming, one colorful dot by brilliantly colorful dot, over the course of days and weeks into a kind of living Pointillist environment so reverberatingly colorful that the eye bounces from one wall to the next. These time-based kaleidoscopic conversions are the hallmark of Yayoi Kusama’s , one of the Japanese artist’s most famous installations—and one of her most directly participatory since the earliest days of her career.

The installation, which Kusama debuted in 2002, has been a hit with viewers for some 20 years. As part of the installation, visitors are given a sheet of colorful dots of various sizes and shades and encouraged to place the stickers wherever they like. The blockbuster 2017 exhibition “Yayoi Kusama: Infinity Rooms” at the Hirshhorn Museum and Sculpture Garden brought in hundreds of thousands of visitors, and over the run of the exhibition, itself garnered more than 800,000 stickers of color.

But the colorful work is more complex than one might imagine. On the 20th anniversary of the first , we found three facts that might just change the way you this playful, and perhaps even poignant, project.

Her Polka Dots Were Inspired By a Childhood Vision 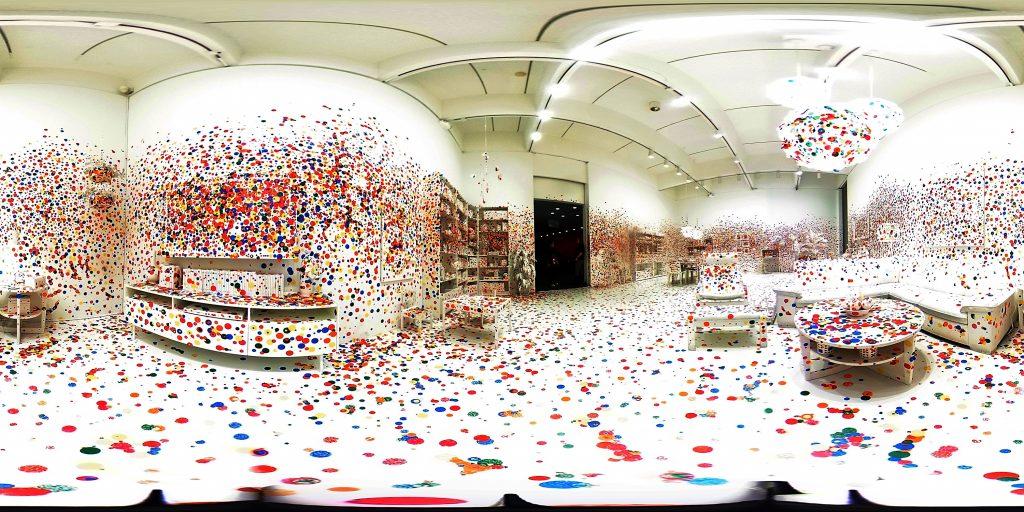 A 360-degree internal view of , by Japanese artist Yayoi Kusama, at the Hirshhorn Museum and Sculpture Garden in 2017. Photo: Alex Wong/Getty Images.

No symbol is more synonymous with Kusama than her dots, and while a polka dot may seem like a lighthearted graphic motif, for the artist the mark alludes directly to deeply personal, even overwhelming experiences. The artist says that her famed polka dots were first inspired by a childhood hallucination she experienced while looking at a tablecloth in her family home. “One day I was looking at the red flower patterns of the tablecloth on a table, and when I looked up I saw the same pattern covering the ceiling, the windows, and the walls, and finally all over the room, my body, and the universe,” she explained. As for the title , the artist further explained, “I felt as if I had begun to self-obliterate, to revolve in the infinity of endless time and the absoluteness of space.” Interestingly, Kusama conceived of the installation not as an artwork for adults, but as a project for children visiting Australia’s Queensland Art Gallery in 2002. The artist has recalled her own childhood as marked by repression and disciplinarian rules. Many of her projects attempt to capture an imagined, idealized youth, perhaps most directly in .

The Furniture and Objects in Each Room Are Locally Donated 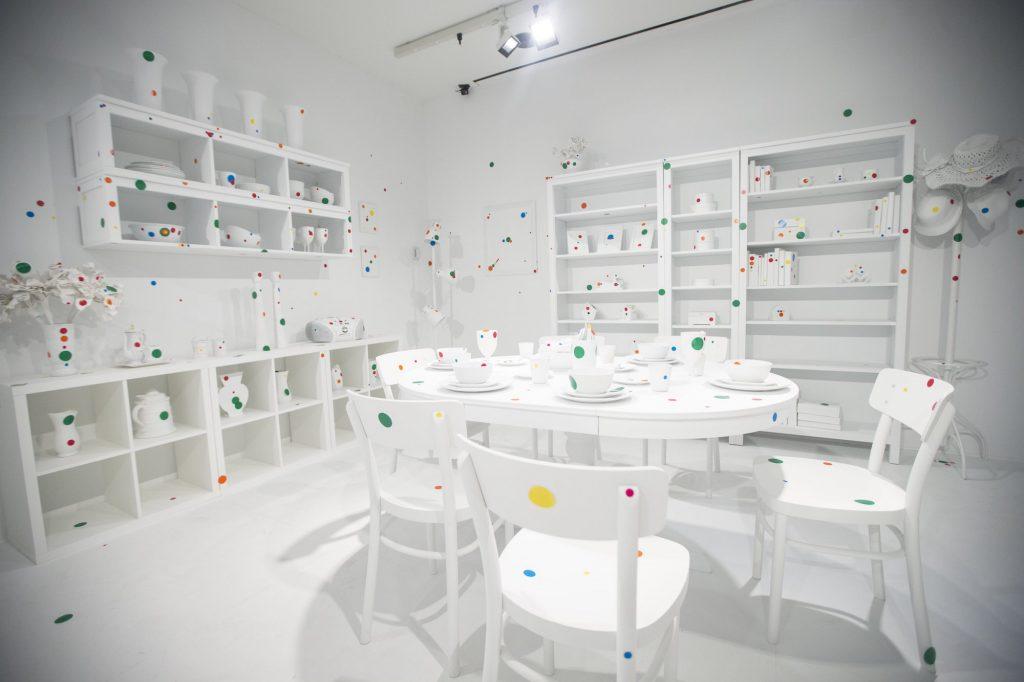 Yayoi Kusama, , on view at the Art Gallery of Ontario, Toronto, in 2018. Photo: Bernard Weil/Toronto Star via Getty Images.

Each iteration of is filled with its own set of household furniture and domestic details, all painted entirely white. The objects included are not standardized, but rather locally sourced through donations at each installation location. The Cleveland Museum of Art, for instance, put out a call for objects when the “Infinity Mirrors” exhibition traveled to the museum in 2018. For Kusama, it’s essential that the rooms reflect familiar, characteristically local touches, in order to encourage visitors to engage the space with confidence and a sense of comfort.

Harkens Back to Her Early Happenings 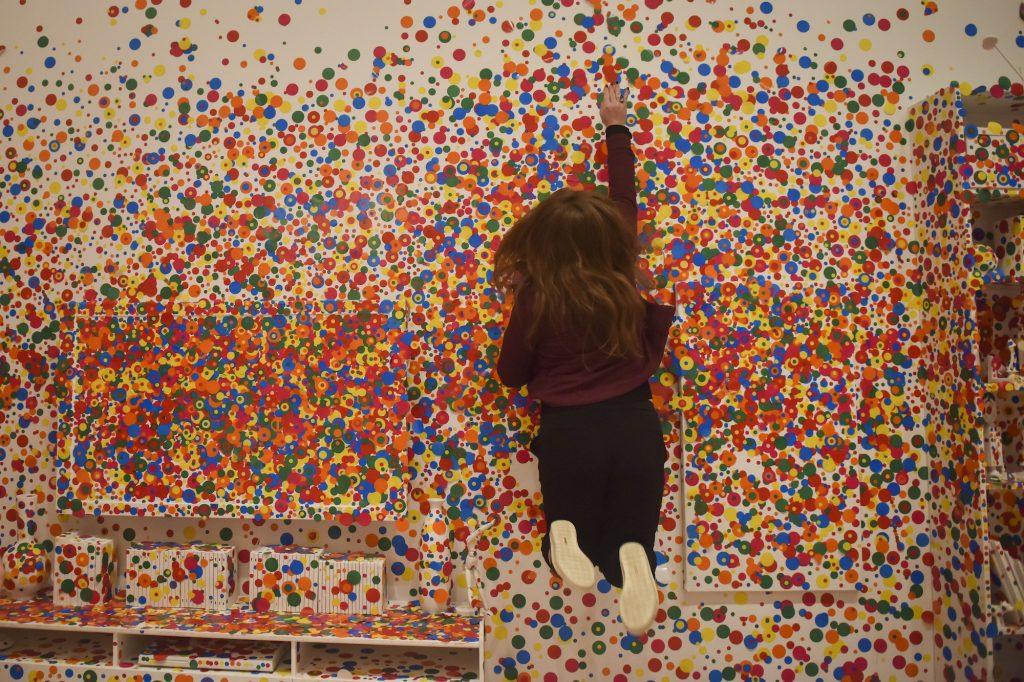 While Kusama is today an art-market star, with paintings reliably selling for millions of dollars, her early works often engaged with communal gatherings that mixed politics with art happenings—and which could not be collected. In 1968, for example, Kusama staged a demonstration against the Vietnam War which involved the artist painting the bodies of performers at the New York Stock Exchange. It attracted a sizable audience, but critics of the time largely dismissed it as a stunt.

“Her happenings were accruing credibility in the broadsheets even as the artist was losing favor in the art press,” wrote art historian Mignon Nixon wrote in the 2012 essay “Anatomic Explosion on Wall Street” about that incidence. In these happenings, Kusama sought participatory ways to engage the public while stirring consternation in critics.

“Publicity is critical to my work because it offers the best way of communicating with large numbers of people,” Kusama explained, adding that “avant-garde artists should use mass communication as traditional painters use paints and brushes.” In this way, Kusama’s continues to draw the public into museum and gallery spaces that are sometimes perceived as cold and uninviting. Particularly for the children for whom the project was originally conceived, upends the white-cube ethos of “look, don’t touch” and welcomes them as active participants in the arts and communal creation.

Hyperrealistic Portraits Rendered in Graphite and Charcoal by Arinze Stanley

NFT Artists Are Not Selling ‘Digital Art Objects.’ They Are Selling a Story—One That Requires Constant Retelling